The other day, when I was working on unifying type casting errors in Lucee CFML, I spent some time digging around in the Lucee source code on GitHub looking for examples of casting error messages. As I was doing this, I came across a Java class called StructAsArray. This wrapper class appears to allow array-like Structs to be treated as Arrays in some scenarios. I don't recall ever seeing this discussed; so, I wanted to perform a quick experiment in Lucee CFML 5.3.7.47.

Based on the code that I am seeing in the Java class, it looks like this "Arrayish" wrapper depends on the keys in the Struct being composed entirely of integer values. This makes sense since - depending on how hard you squint - an Array can be thought of as a Struct that associates numeric indices with values (and has a predictable iteration sequence).

That said, let's try to create a Struct with numeric keys and see what happens:

As you can see, our Struct variable, arrayish, is just a normal Struct that happens to have keys that look like array indices. Of course, the object is still a Struct, which means that the member methods are all "struct" member methods. As such, we have to use the Built-In Functions (BIFs) for Arrays in to get this wrapper behavior for Structs to work.

That said, when we run the above code, we get the following output: 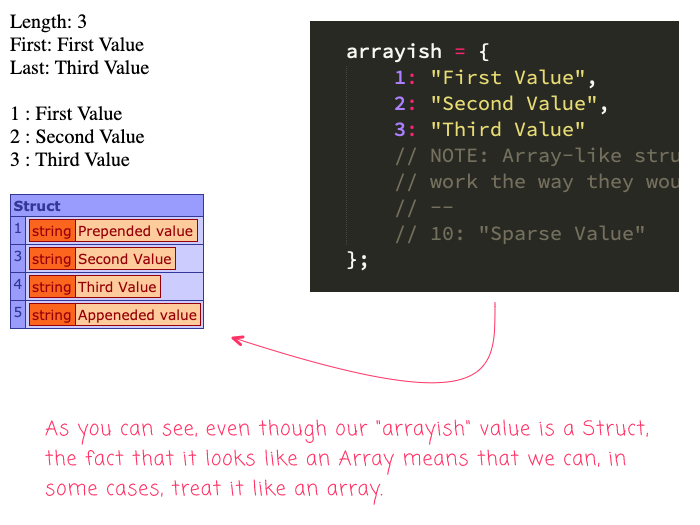 As you can see, since our Struct looks like an Array, we can treat it like an array in a subset of Array use-cases.

To be honest, I don't have an immediate use-case for this. It was just a curiosity. I assume this is something that Lucee CFML is using internally? Does anyone have a good example of where something like this might be helpful?

I wonder now if it would make sense for ColdFusion to just have an arrayFrom() built-in function:

... something that could take array-like and other iterable values and turn them into native ColdFusion arrays.