Anyone who has used ColdFusion is very familiar with the Query object that is returned from the cfquery tag. But, if you are using Lucee 5+, the cfquery tag has a fun little efficiency built into it: the returnType attribute. The returnType attribute accepts the values, query (the default), struct, array, and array_of_entity. And, gets the Lucee CFML engine to perform a little post-query-processing on your behalf. There's no magic here; but, if you often convert your queries into Arrays - like I generally do - getting the Lucee CFML engine to do it for you makes life just a little bit sweeter.

One place that I would find this particularly helpful is when I am writing a SQL query that joins multiple tables together. As of late, I've gotten into the habit of prefixing the columns from each joined table so that each set of collocated columns can be clearly identified:

Then, on the server-side, mapping each set of collocated records onto an individual ColdFusion struct that I can consume in my View template:

As you can see, in order to do this, I have to allocate an empty Array; then, I have to loop over the Query results, break-apart each record, and append the transformed object onto the Array. If my Query came back as an Array already, I could convert this transformation into a single .map() call.

To see this in action, I've put together a queryExecute() call that joins two tables. I then .map() and .sort() the resultant Array:

As you can see, I am passing returnType: "array" to the queryExecute() function configuration. This returns the recordset as an Array of Structs. Which means that I can immediately call .map() and .sort() (among many other member methods) directly on the results.

Now, if we run this Lucee CFML page, we get the following output: 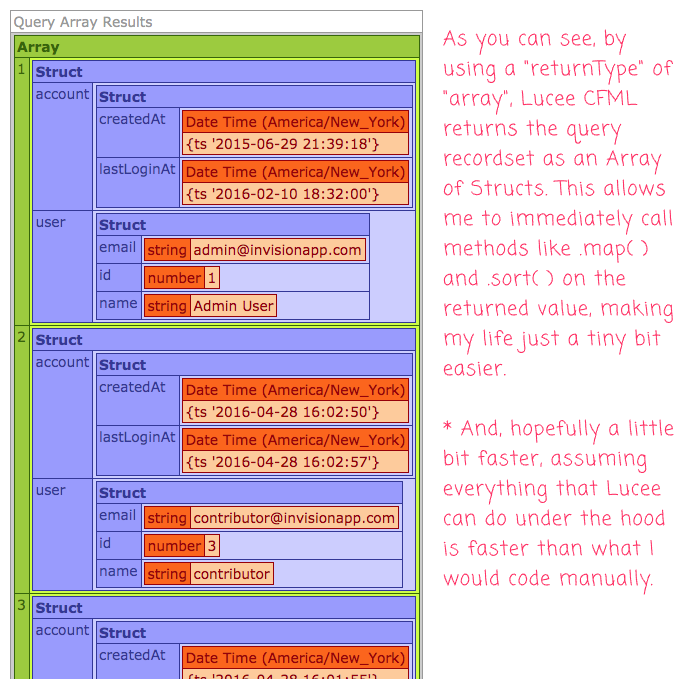 As you can see, by using a returnType of array, Lucee CFML returns the query results as an Array of Strucuts. This means that I get to start calling member-methods like .map() and .sort() directly on the returned value!

Like I said above, there's no "magic" here. Lucee is really just doing something declaratively that I normally would have done imperatively. So, really, this is just a small efficiency that removes a few lines of code. But, every little efficiently is a win. And, hopefully, the native Lucee implementation that converts the recordset into an Array of Structs is just a little bit faster than anything I would have written myself.

Epilogue On returnType Of struct And columnName

If you specify a returnType of struct, Lucee will convert the query recordset into a Struct in which each record is keyed by the given columnName. At first, I was very excited about this because I thought it would be akin to the .groupBy(key) concept that we've seen in libraries like Lodash. However, Lucee does not "group" records that are keyed by the same value. Instead, it just overwrites the value with whichever record came last.

nice post. I actually love the returntype="struct" way more. Since I use it to lookup values by ID. If you want to have Lucee group your results, you should create a columnkey just for that. I know that overwriting the key is perhaps a problem, but then again, it might be just the wrong key you are using. All in all a struct is a key value construct and the key is unique.
See you at CFCamp :)

If I know that the IDs are going to be unique, I think the struct type will be cool. But, my common use-case is that I am performing an in-app "join" instead of doing it in my queries. So, my code will often look like this:

That last line ... utilites.groupBy( otherThings, "thingID" ) ... is what I would try to replace with the struct type. But, it will depend on whether its a one-to-one or a many-to-one. If its a one-to-one, then returntype of struct will be good! But, if one-to-many, I'll have to keep using a custom function.

Regardless, this stuff is cool!

Re: CFCamp -- will be checking my calendar ;)

Not dis-proportionally excited at all, in my opinion. I was also pretty excited about this feature and submitted a feature request to the CFWheels Repo [1] as a result. As move further and further away from ACF and begin to explore LCF more closely, I'm really loving how thoughtful their implementation is. They add a ton of sugar to the language which makes working with it joyful. Super stoked to see you highlighting some of them.

I definitely agree. A lot of subtle, but really nice things! The challenge for me is going to be finding the features so that I know I can leverage them :D

You can do this in MSSQL and MariaDB already directly in the DB using new json objects...

Interesting. I'm not super familiar with MSSQL syntax, so I am not sure which parts of that query are specifically for JSON and which are just MSSQL's way of aliasing columns. It seems, though, like you have to really change the query itself to return JSON. The nice thing about Lucee is that you don't change the query at all -- you just have to tell it to create an array out of the return values.

Hmm, I am not sure what happened with the formatting of your comment. It looks like somehow the <code> didn't generate properly from your fenced code block. Somehow, P-tags ended up inside the Code-tag. Very odd. I'll have to figure out what happened.

I finally followed-up with a post about using returntype="struct":

I can definitely see this being helpful in some algorithms!