A few months ago, I looked at returning CFQuery results as an Array in Lucee CFML; and, in the comments of that post, Gert Franz pointed out that Lucee could also return CFQuery results as a Struct in which a given column would be used as the look-up key in said Struct. Mapping a query onto a Struct is actually a technique that I use a lot in my ColdFusion code, typically with some sort of .indexBy() or .groupBy() User-Defined Function (UDF). As such, I wanted to take a moment and look at how I might replace my custom functions with this built-in query feature in Lucee CFML 5.3.6.61.

To invoke this feature in Lucee CFML, all you have to do is provide the CFQuery tag with two additional attributes:

This will tell the Lucee runtime to iterate over the underlying result-set and map each row to a Struct-key using the columnkey as the row identifier. To see this in action, here's a query that looks up Club Membership counts and then maps them over to the userID associated with the count:

This is going to return a Struct in which the userID column of each row is used as the key in the resultant Struct. And, when we run this ColdFusion code, we get the following output: 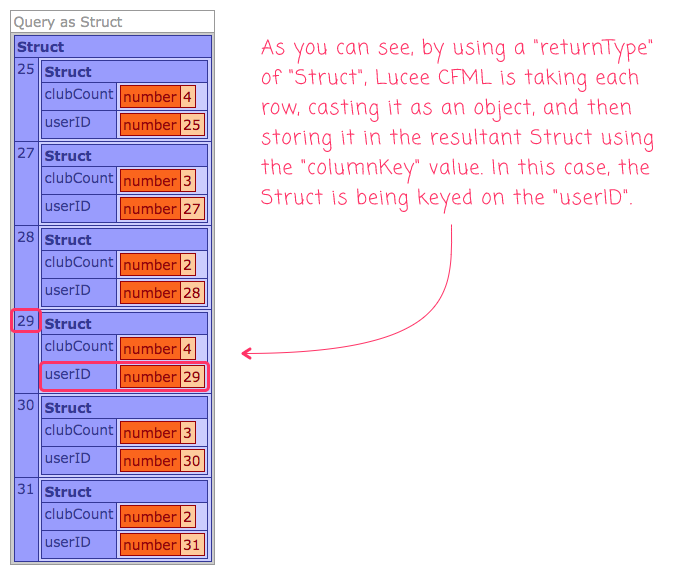 In a ColdFusion application, I often use this type of data-structure to move INNER JOIN relationships and sub-queries into the application code. Not that there's anything wrong with INNER JOIN and sub-queries; I just have cases in which I like to simplify my SQL queries and break down my data-aggregation into individual steps.

To see how this returntype="struct" might be used to replace a sub-query, let's look at Users who belong to Clubs. In the following code, I'm going to get a subset of application users; and, then for each user, output the number of Clubs in which they are a member. To do this, I'm going to use the returntype="struct" to generate a map of Club-counts associated with each user:

As you can see, once I have the users that I want to inspect, I pluck the ID values from the set of users; and then I use these IDs to gather all the Club-count values. The resultant Club-counts Struct is keyed on the userID column.

ASIDE: Notice that I'm passing an Array of user IDs into my CFQueryParam tag. This is a hot tip that I picked up from Julian Halliwell. Lucee CFML will automatically treat the CFQueryParam as a list="true" parameter-binding since the value attribute in an Array. Nice!!

Of course, users that don't have any Club-memberships will be omitted from the resultant Struct. As such, I'm using the safe-navigation operator in conjunction with the Elvis operator to provide a default Count value for each user in the output.

And, when we run this ColdFusion code, we get the following output:

Another aspect of this return-type that isn't immediately obvious is that the resultant Struct is an Ordered Struct (see Lucee Dev Forum). Which means that a for-in loop will iterate over the Struct in the same order that the keys were assigned. Which means, if the underlying query had an ORDER BY clause (or an implicit ordering based on an Index), the for-in loop will match that ordering.

Again, there's nothing wrong with performing sub-queries in the Database - Databases are totes-awesome for this kind of thing. But, in algorithms where data aggregation needs to be broken-down into individual steps for "reasons", I am loving that Lucee CFML can index a query for me. This will almost certainly replace my .indexQueryBy() calls using what is certain to be a faster, more native implementation.

ah, the array for cfqueryparam is a nice trick, I just updated the Lucee docs to reflect this https://github.com/lucee/lucee-docs/pull/877

there is also some newish support for indexed queries, since 5.3.4.23

But the implementation is somewhat buggy https://luceeserver.atlassian.net/browse/LDEV-2803

Interesting, I hadn't seen this indexed-stuff before. I'll have to dig in more deeply to understand what it's doing (since the docs just say indexname, but don't say what it is, ha).

One thing that could be really cool re: returning the query as a Struct, would be the ability to group duplicate rows. So something like this:

Then, this could both act as an "index by" operation or a "group by" operation. I use both of these on a regular basis (but do so using UDFs on the returned query).

Just stumbled on that post (Thanks Phil) and saw the array trick for cfqueryparam!

But, need to mention that you need the sql type of the values in the array for it to work. I guess you should always have the type specified, but it is not required if just a string, an integer, etc...

I also vaguely remember that there was some recent breaking change about passing in an Array as the value. I think it might be what you are talking about - that if you omit the type, something funky can happen. Definitely, I would always supply a type, though.