This past week at InVision, some data was accidentally deleted from one of our MySQL databases. In order to get the data back, our Data Services team had to restore one of the backups. And then, I had to write a ColdFusion script that would transfer a slice of the data from the restored-database back into the production database. Of course, for security reasons, I was only given access to the backup. As such, I had to locate the deleted records, serialize them as a series of INSERT statements, and then hand those SQL queries off to the Data Service team for execution. This was actually a really fun task to work on; and so, I thought it might be interesting to share my basic approach.

The deleted-data was spread across multiple tables. As such, my data restoration algorithm had to span multiple tables and multiple queries. What I ended up using was a Struct in which each key was a tablename and each value was an Array of database records. It was little more than a glorified nested loop:

The most interesting part of this algorithm was the serialization of the record into the INSERT statement. After some trial and error, I found that I had to massage some data-type, leave some data-types as is, and Hex-encode other types in an attempt to mitigate any lurking SQL-injection attacks in the data.

Here's a simplified version of the script that looks at a single table, product. Please note that I am working with a MySQL database, so I am using some syntax that MySQL-specific. I authored this script to be readable in a top-down manner:

This algorithm is not designed to account for every single data-type that MySQL offers - it accounts only for the data-types that we use. And, when I run the above Lucee CFML code on a demo table, I get the following output: 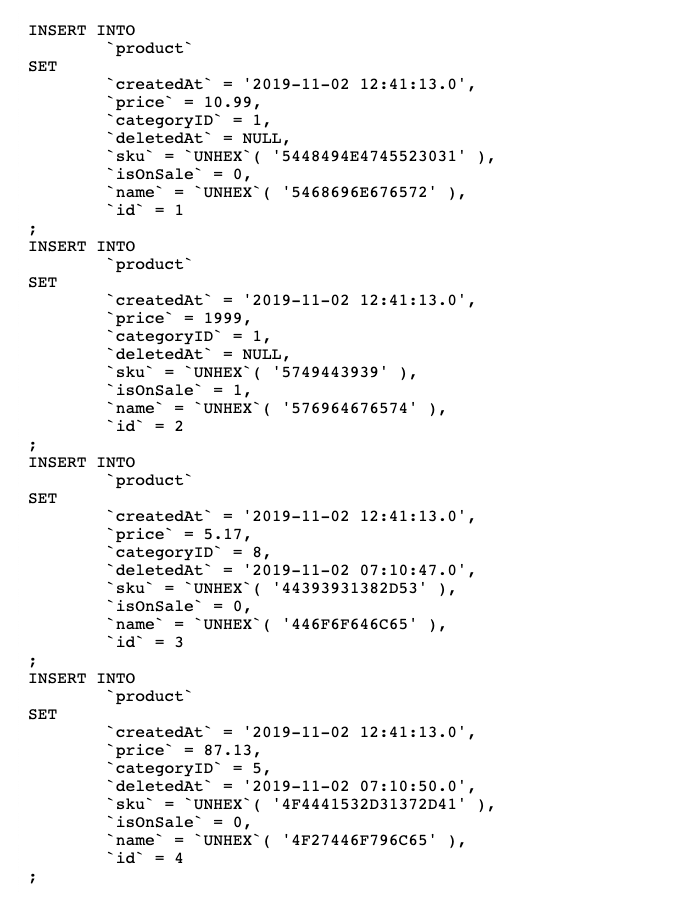 As you can see, each record in the set of database tables was serialized as a single MySQL INSERT INTO ... SET statement (special thanks to Bryan Stanley who taught me this syntax).

In a ColdFusion query, I would normally use a <cfqueryparam> tag to protect myself against SQL Injection attacks. However, since these queries are going to be executed outside of Lucee, I had to explicitly escape Strings. To keep things simple, I just Hex-encoded the value in Lucee and then used the MySQL UNHEX() function to translate it back to string format. By doing this, I prevent any embedded malicious (or special characters) from messing up the SQL statements.

I then took these MySQL statements, zipped them up, and passed them over to the Data Service team for execution. Of course, before doing that, I was able to run the INSERT statements against a local version of the database schema to make sure everything populated as expected.

I am sure that there are professional tools out there that would do some of this work for me. But, I love to write SQL; and, I don't know any of those tools; so, Lucee CFML was the right tool for the job at the time.

Tweet This Groovy post by @BenNadel - Serializing A MySQL RecordSet As A Set Of INSERT Statements Using Lucee CFML 5.2.9.40 https://www.bennadel.com/go/3713

Hi Ben, is there a reason you're using MySQL instead of MariaDB?

I use MySQL 1) out of habit, and 2) it's what this app has used for the past 7-years. What's the high-level overview of MariaDB? I believe the last I heard, it's just a drop-in replacement for MySQL. Is it just supposed to be faster, but all the same API?

So, over the past two days, I've been working on some data remediation for a client (who accidentally bulk-removed users from our platform). And, as part of that remediation, I've had to generate INSERT statements from SELECT statements directly within MySQL:

Syntax-wise, it's harder to do in SQL vs. ColdFusion; but, it got the job done.