A few years ago, I looked at the way scoped-variables were treated inside a ColdFusion component when set within the context of a CFThread tag. Since that posting (which was overly complex in retrospect), I've come to love CFScript; and with that love, I've also dropped most of my explicit references to the Variables and Arguments scopes. This has lead to a few "head scratching" moments when setting unscoped variables inside of a CFThread tag.

Each CFThread tag shares the Variables scope of its parent page. And, when you reference unscoped variables within a CFThread tag, ColdFusion will look in the Variables scope for those references (after looking in the thread-local and thread-attributes scopes). If you go to update an unscoped, simple variable within a CFThread tag, however, you do need to provide the "variables." scope; otherwise, ColdFusion will set the new value in the thread-local scope.

NOTE: I am explicitly referring to "simple" variables as updating properties and indices of Structs and Arrays, respectively, does not suffer from this problem.

To demonstrate this, I've create a ColdFusion component that has two private variables, valueA and valueB. These private variables are then both referenced and updated within a CFThread tag: 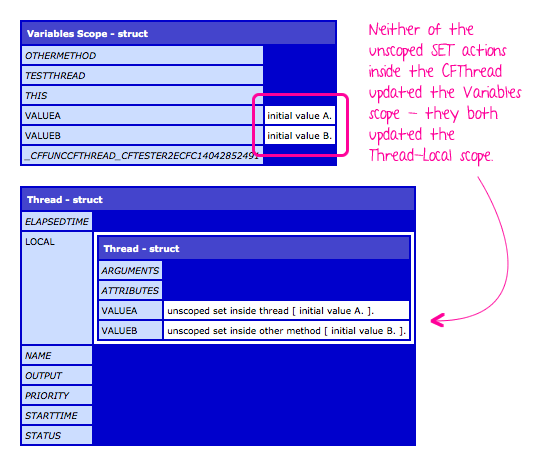 Anyway, just a minor note to be aware of.

If you want to write to a scope outside the thread you'll have to use a backdoor to pass in a reference (just remember ACF's idiotic legacy behaviour of passing arrays by copy instead of by reference):
<cfthread action="run" name="LOCAL.myLittleThread" tunnel="#createObject( 'java', 'java.lang.ref.SoftReference' ).init( LOCAL )#">

When it comes to CFThread and Arrays, you're actually fighting two different wars at the same time! On the one hand, Adobe ColdFusion passes arrays by value, not by reference. But, you're also dealing with CFThread attributes - and, ColdFusion performs a deep-copy when you pass something in via the thread attribute :)

I understand why they do it - it helps with race conditions and concurrency and all that stuff. But, on the other hand, it is very frustrating.

What I usually do now is just pass IDs in via the attributes and then reference the variable's scope when I need to perform actions within the thread body.

In this case, I am performing a deep-copy of the integer, UserID, which is no big deal; then, I use the variables-scoped service object - userService - to get a a thread-local copy of the object I need to do stuff with.

So far, that's been workout out fairly well.

I've always been comfortable not using the variables prefix, and prefer that the unnamed scope works the same way inside a thread, so I came up with this function that runs a function in the context of a component inside a thread by accessing it via "this":

Then elsewhere in the component:

Of course this does clutter the "this" namespace, and you wouldn't want to change the function related to the thread name on the fly because of race conditions, but it does work.

That said, I wonder if references to the "this" are really just doing this:

... where "this" is, itself, an "unscoped" variable on the this scope.

I vaguely remember a few years ago trying to override the "this" scope from locally within a function:

Anyway, the whole scoping in ColdFusion components is a little funky monkey :)