The other day, while recording a Working Code podcast episode, I mentioned to Adam that a big blind-spot in my database mental model was storing non-AUTO_INCREMENT primary keys. Or, more specifically, using something like a UUID (Universally Unique Identifier), GUID, or CUID as a table's primary key. As such, I wanted to start building up some foundational knowledge. And, based on what I've been reading, it seems that being able to convert a UUID string to and from a binary value is an important point of know-how. This post looks at performing this String-to-Binary conversion in ColdFusion.

To be clear, I am not a database expert! Yes, I love writing SQL. And yes, I love thinking deeply about database index design. But, I'm not one of those people who knows much about low-level storage details, engine ramifications, data replication, or any of the many complex topics that go into database management. Consider this post a note-to-self more than anything.

To start learning about storing Strings as primary keys, I did some reading:

From what I've seen in these articles - which is echoed in many StackOverflow posts - is that using Strings as primary keys is a trade-off: in return for having system-independent uniqueness, you incur larger indexes, larger working memory, possible performance hits, less intuitive values (pro-or-con depending on how you see it), and more complex workflows.

This post doesn't tackle all of those issues - I'm here to noodle on just one of them: larger indexes. Part of the index-size issue comes from how the value is stored. If a UUID is a 35-character String, storing said UUID as a String requires 35-bytes (1 byte per character).

And, that's just for the column value itself. When you consider that the primary key is implicitly stored as the suffix on a secondary index, the storage requirements of a "UUID as String" is multiplied by the number of indexes on the table. Not to mention that any other table using said UUID as a foreign key will also need 35-bytes.

A common suggestion for reducing storage size is to persist the value as a VARBINARY(16) instead of a VARCHAR(35). This technique is based on the fact that a UUID is already a HEX-encoded value. As such, converting a UUID into a Byte Array requires little more than a binaryDecode() call.

Converting a binary value back into a UUID is a little more work since we have to re-insert the dashes (-) after we generate the String. Here's two User Defined Functions (UDFs) that I created for managing this conversion in ColdFusion:

To try these functions out, I created a simple MySQL database table that uses a VARBINARY primary-key and a value column that stores the UUID in plain-text so that we can confirm values:

Then, I generated 10,000 rows in this test table. Note that in my INSERT, I'm using a CFQueryParam of type binary for the primary-key column.

To then test the SELECTing of rows, I looked in the database table, grabbed a UUID from about half-way through the table, and used it to locate the row. Notice that I'm using the uuidToBinary() to perform the look-up; and then, I'm using the binaryToUuid() to consume the key in my ColdFusion code:

When we run this ColdFusion (Lucee CFML) code, we get the following output:

And, if we run an EXPLAIN on this query, we can see that it uses the implicit primary-key index to look up a single-row without any table scanning!

NOTE: I'm using MySQL's UNHEX() method in this case since I'm running this EXPLAIN right in the database interface: 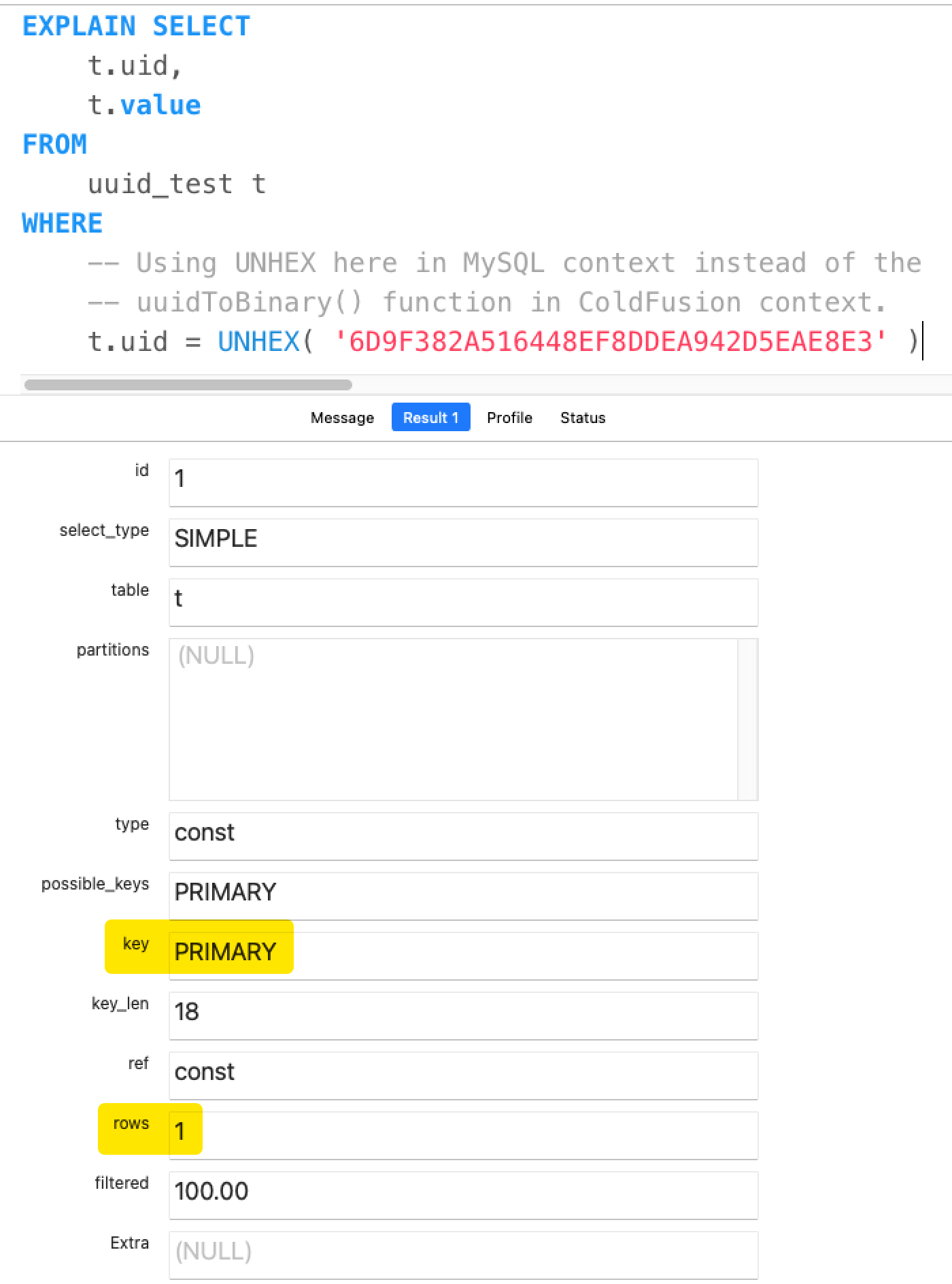 As you can see, this SQL query is using the implicit primary key (PKEY) index. And, is able to locate the single row using the index without any table scanning.

While MySQL 5.7 ships with a function to generate UUIDS (time-based, version 1), it leaves the string-to-binary conversions up to the application server. As of MySQL 8, however, the database engine now includes additional functions to perform these conversions in the SQL context:

For the time-being, I'll be sticking with Integer-based AUTO_INCREMENT columns for my primary keys. But, at least I feel like I'm finally starting to build up my mental model for what a String-based primary-key might look like. The UUIDs that ColdFusion generates (random, version 4) incur additional problems with regard to index structure and storage; but, that's a whole other topic (of which I know very little).

Tweet This Fascinating post by @BenNadel - Converting UUIDs To Binary For VARBINARY(16) Storage In MySQL And ColdFusion https://www.bennadel.com/go/4332

Yeah, this is my biggest fear. Having an int as the primary key feels like such a known, battle-tested approach. With Strings, I feel like I'm stepping back into the complete unknown. Plus, with int, the primary-key can essentially step-in as an ORDER BY column as well. But, with a String, that might not be in any particular order, you can't take those kind of short-cuts ... unless the String leads with a date/time-stamp ... but again, just a lot of stuff I don't have a handle on yet.

I wouldn't lose sleep over this!

It depends on what the key will be used for ... if it's only for indexing / foreign keys (and most of them are) then stick to smallest ints. If you need something more human readable or universally unique (you'd never need both at the same time) ... then those are each different types of data (and not the same thing).

You can also have all of them in the same record ... I've had tables with auto-increments, uuids, and human readable tokens all in the same row (I don't feel like remembering why right now though oops) ... perhaps only because looking up a top level record by a string is okay ... but doing deep SQL joins ... BAD! (and you usually need to do both)

Actually most of the times I've needed to create reasonably unique, reasonably human readable identifiers is because the data was going to reside OUTSIDE of a relational database .... like a filename in a filesystem or a serial number stuck to a widget.

Now that you say that, I definitely have a few tables where we have int for the primary key and a varchar(50) for a "non-guessable" key that can be referenced externally (and rotated as well should we need to, in theory). That varchar has a unique-index on it, and I never worried about it before.