After posting yesterday's exploration of position: sticky on the horizontal axis, Patrick Finegan - one of our Customer Success Managers at InVision - felt that it would make for a great conversation with one of our customers. As such, I had to generate a stand-alone version of the demo using "real data". And, since my Angular app was expecting said data in a particular format, I ended up using the JSON_OBJECT() function, introduced in MySQL 5.7, to generate Newline-Delimited JSON (NDJSON) data that I could plug right into my Angular app.

I am sure that every database GUI (Graphical User Interface) provides some sort of export mechanism whereby you can export a given recordset as CSV (Comma Separated Values), XML, or perhaps even JSON (JavaScript Object Notation). But, in my case, I needed to "massage" the data as part of that export. For example, when inter-operating with JavaScript, I always return my DATETIME values as UTC Milliseconds. And, I often (though not always) return my TINYINT values as true/false Booleans.

... I was able to generate my NDJSON results using something akin to the following SQL statement:

The JSON_OBJECT() function is a variadic function; meaning it accepts a variable number of arguments. In this case, the arguments consist of a set of object keys interlaced with a set of object values. In other words, it takes a series of key-value pairs and returns the generated JSON type. MySQL then serializes said JSON type into a JSON String as it generates the result-set. And, when we run this SQL query in MySQL 5.7.32, we get the following output: 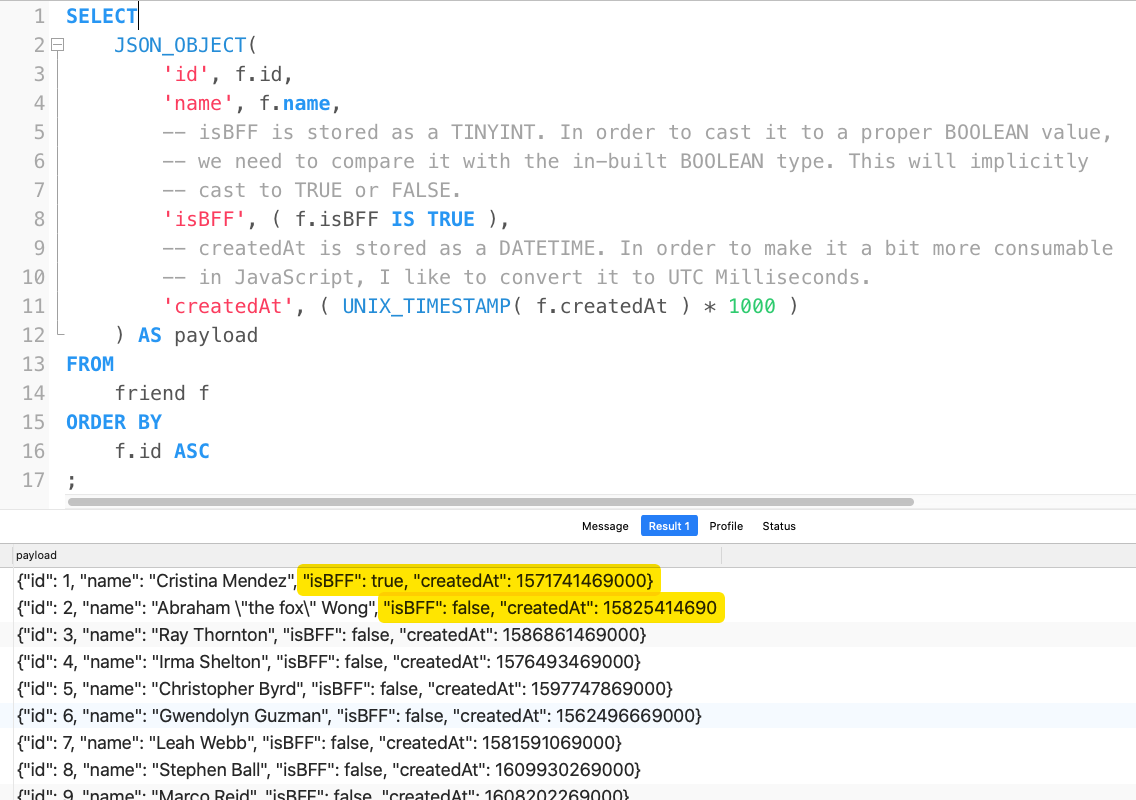 As you can see, each record is returned as a JSON (JavaScript Object Notation) payload. And, my isBFF and createdAt values have been massaged into Boolean and UTC Millisecond values, respectively. So much winning!

ASIDE: At this point, in order to drop this data into my Angular app, all I had to do was add a comma to the end of each line and jam it into an Array. This was a trivial effort using the extraordinary power of multiple cursors in SublimeText 3 (ST3).

JSON is the de facto standard for data interoperability. And, with the slew of JSON-related functionality introduced in MySQL 5.7, I now have a lot of options when it comes to generating data. In this case, I was able to use the JSON_OBJECT() function to return a set of records as Newline-Delimited JSON (NDJSON) without breaking a sweat!