At InVision, we are in the process of upgrading some of our MySQL database servers from MySQL 5.6.x to MySQL 5.7.32. While this is a "minor" upgrade (done so in order to remain within LTS - long-term support), this update does include something kind of cool: a JSON column type. I've never actually used any official JSON (JavaScript Object Notation) support in a relational database before. So, I thought it would be fun to sit down and try it out in Lucee CFML 5.3.7.47.

While the JSON support in latest version of MySQL - version 8.x - is more robust from what I have read, the initial JSON offering in MySQL 5.7 consists of schemaless validation, some JSON-related access methods, and explicit indexing of "virtual columns". When writing to a JSON column, the database validates that the non-NULL payload is a valid JSON structure; but, it doesn't constrain the contents in any other way. Nor does it require that the structure of the JSON column be the same across all rows in a table. When returning a JSON column value, the payload is returned as a String, leaving serialization and deserialization up to the ColdFusion application server.

Since I've ever experimented with this MySQL feature before, I won't go into any more detail than that. I hope that nothing I said above is overly incorrect.

The benefit - and often the drawback - of working with a schemaless document model is that it is very flexible. In most cases, you don't actually need that kind of flexibility in a data-persistence layer. But, one place that I thought it might be helpful is when storing user preferences and flags. An application's concept of user preferences will almost certainly change over time. And, it would be nice to have a data-persistence layer that rolls along with said evolution.

In a strictly relational context, we could model these types of user-preferences and flags using an Entity-attribute-value model (EAV), where we have a database table with the following columns:

Then, as new flags are added to the application, it's just a matter of putting a new flagName in the application layer and adding new records - as needed - to our EAV table.

That said, this type of entity-attribute-value model maps really nicely onto the flexibility of a JSON column type. To explore this, let's create a user_flags table that contains a JSON column for these dynamic, key-value pairs:

Now, as we add and remove user preferences and flags for a given user, all we have to do is modify the flags JSON column. However, since we'll want to treat flags as an on demand feature that evolves over time, we do have to take care not to overwrite the existing flags payload. Instead, we'll want to update it with new keys, as needed.

To do this, I'm going to try and use two features together:

When used in conjunction, I think we'll be able to add new JSON payloads while safely updating existing JSON payloads that have already been associated with a given user.

To try this approach, I've created a ColdFusion database gateway component that provides various CRUD (Create, Read, Update, Delete) methods for the user_flags table. And, while the JSON column type is inserted and retrieved as a String, I don't want that concept to "leak" too much into the main application logic. As such, this data access gateway (DAG) is going to deal with Structs as inputs and outputs while managing the serialization / deserialization of the JSON behind a layer of encapsulation.

Note that several of these gateway methods call, setUserFlags(), which is our "patching" method that uses ON DUPLICATE KEY UPDATE for the aforementioned "upsert" functionality:

Notice that all the values from within the flags JSON column are passed-through the database driver as a String. As such, I have to run deserializeJson() on the values before I return them to the calling context.

And, to test this data access gateway, I just ran some some inserts, updated, and deletes:

When we run this ColdFusion code against the MySQL 5.7.32 database, we get the following browser output: 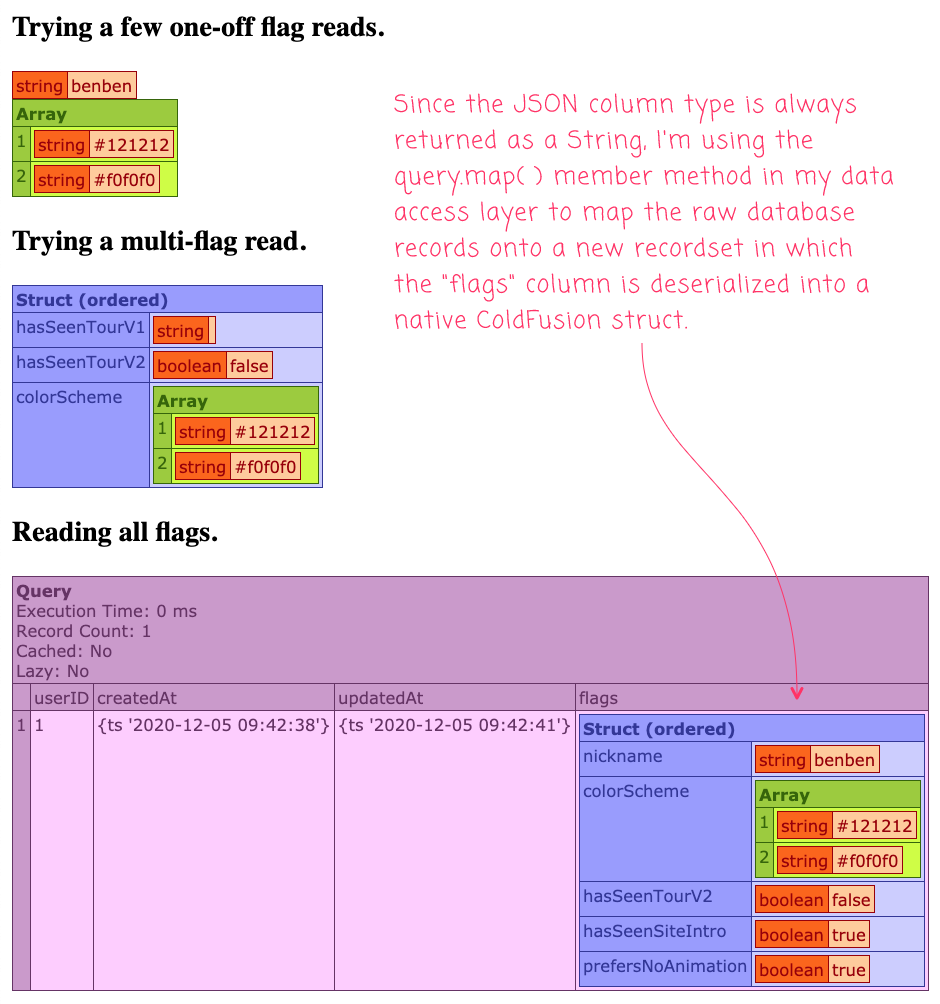 As you can see, the values being returned from the data access layer are native ColdFusion data-types. This is because I'm using the deserializeJson() method internally to translate the stringified values in the database layer into "hydrated" values within the application layer.

From what I've read, there's a lot more that you can do with JSON column types (even in the 5.7 release); but this was just my first look at them, so I wanted to keep it as simple as possible (and no simpler). This was also my very first use of the ON DUPLICATE KEY UPDATE technique, which is really exciting! So, for me, this whole exploration was a massive value-add for my mental toolbox. Hopefully there's something interesting in it for you as well.

Epilogue: Why Not Just Use a LONGTEXT Field?

Since we have to serialize and deserialize the JSON within our data-access component, it may be tempting to ask why we don't just use a LONGTEXT field? And, in fact, prior to MySQL 5.7, this is exactly what people on my team have done when trying to shoe-horn JSON into a relational database model.

ASIDE: We've discovered that reading-in a LONGTEXT field can be garbage for performance in high throughput scenarios. After having discovered this after the fact, we've had to jump through hoops to do "just in time" reading of LONGTEXT "JSON" if - and only if - we need the values.

Not covered in this post, you can also index values within a JSON column by creating "virtual fields". And, I'm sure there are a whole host of other performance-related reasons that I am still naive to.

This morning, I wanted to share a quick follow-up post in which I continue my exploration of the JSON column-type in MySQL 5.7:

In this follow-up post, I look at trying to improve upon an old, janky design in which I was / am storing foreign keys in a comma-delimited list. I try to improve on that approach by using a JSON hash in which the foreign IDs end-up being keys in the hash.

A quick follow-up to this post, I've been thinking about the delta between the MySQL JSON support and the feature-set we get in more robust "document" databases (and the like). And, one thing I wanted to see if I could do was atomically increment a value within a JSON column:

Turns out, since MySQL is build with ACID properties, this is actually fairly easy to build (if not a bit verbose).

I don't know how I missed this in my earlier exploration, but it seems that there are also two new JSON aggregation functions that can be used with GROUP BY and other aggregation approaches:

The JSON_ARRAYAGG() and JSON_OBJECTAGG() functions are going to be super helpful!