As you may know, I collect most of my JavaScript demos in a single GitHub repository (JavaScript Demos). And, for the last year or so, I've been compiling my subset of Angular demos with Webpack 3. These Webpack compilations have been using the ts-loader plugin to transpile and concatenate files. As of today, however, I've finally figured out how to upgrade my Angular build process to use Webpack 4 along with the Angular-provided webpack tooling, complete with Ahead of Time (AoT) compiling. This should significantly reduce my vendor bundle and decrease the initial load time of my Angular applications.

CAUTION: I don't really know what I'm doing. Webpack is a mystery to me. Take all of the code here with a handful of caution and understand that I have not battle-tested it. I have only gotten to a point where it all seems to compile and behave the way I want it to. This post is primarily for my own documentation. Your mileage may vary. Thar be dragons. And so on.

Since the Angular portion of this post isn't really relevant, I will omit the code (you can view it on GitHub if you want). I'll only point out that the Angular application has this subset of files:

With my previous builds, I was using the ts-loader and angular2-template-loader Webpack loaders. Both of these loaders are now being replaced by the one Angular-provided Webpack loader, "@ngtools/webpack". This one loader will handle the transpilation, HTML and CSS inlining, and Ahead of Time (AoT) compilation.

In order to get the "@ngtools/webpack" loader to work, I had to install the following packages:

Here is my full package.json file so you can see what npm modules I am using for my Angular 6 demos:

And, here is my Webpack configuration file:

I tried to keep this configuration code as simple as possible. And, I tried to comment it to the best of my abilities (if for no other reason to help ensure that I knew what the heck I was talking about). There are few key things to see:

With this Webpack configuration in place, if I run "npm run build" to generate the production build with Angular's Ahead of Time (AoT) compiling, we can see that the automatically-generated "vendor" bundle is less than half the size of what it would be normally: 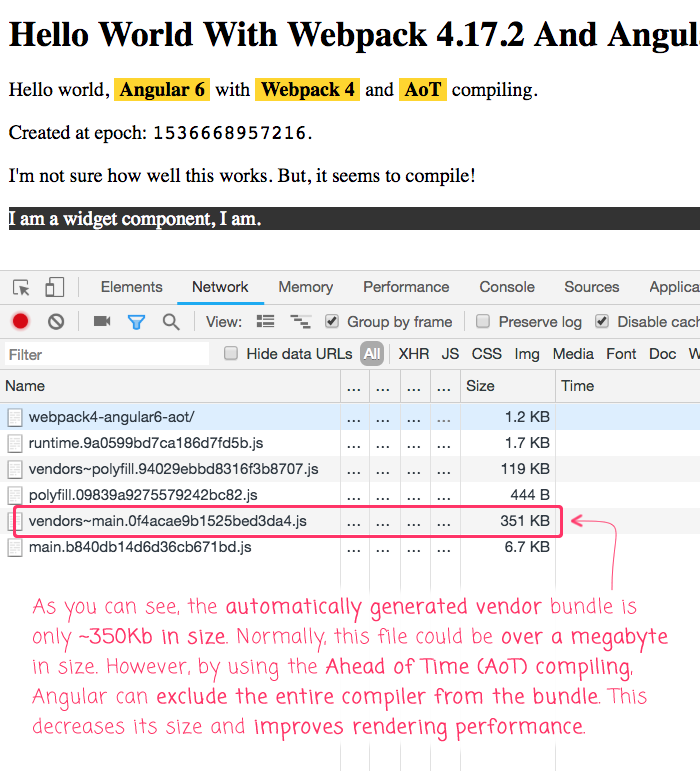 This reduction in size is thanks to the fact that Angular can completely exclude the compiler from the bundle that gets delivered to the browser. Since the Angular code has already been compiled at build-time, there's no need to include the JIT (Just in Time) compiler code in the browser context.

Now, in my Webpack configuration file, you can see that I am changing the "devtool" setting for production. Specifically, I am using the "nosources-source-map" setting. To be completely transparent, I have little understanding of how source-maps actually work - to me, it's all magic. That said, this setting allows the browser to include proper file-names and line-numbers in errors stack-traces without actually having access to the original source code.

To test this, I added a click-handler in my Angular code that would throw an error. And, if I trigger that error, we get the following output: 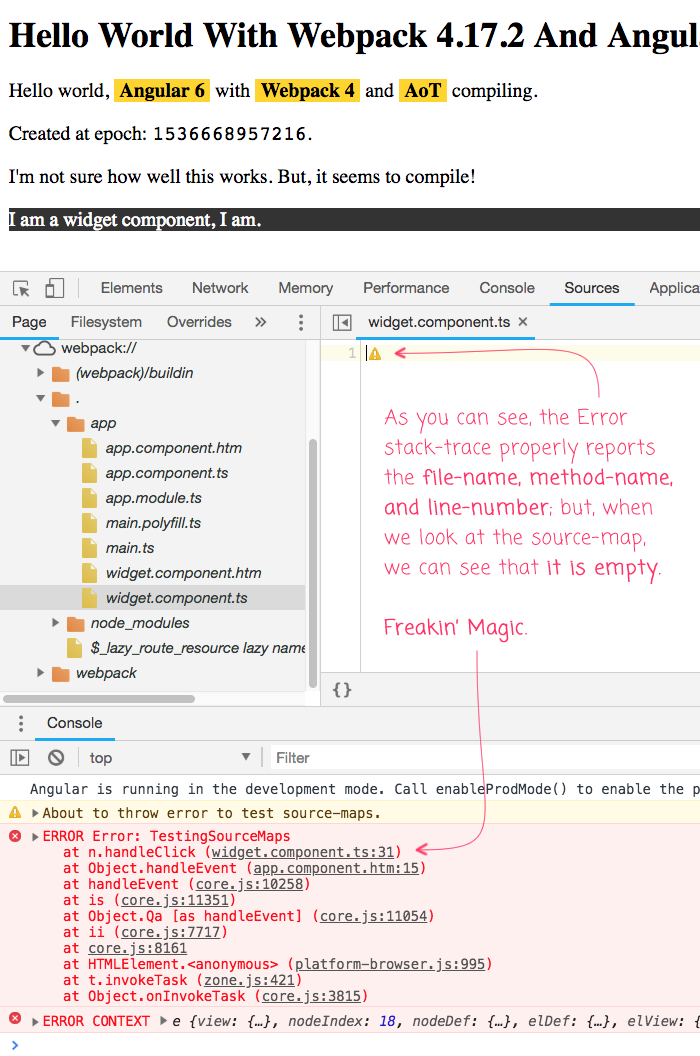 As you can see, the Error stack-trace properly reports the file-name, method-name, and line-number. But, when we look at the source-map content, it is empty. None of our original source-code has to go to the browser in order to get high-fidelity error reporting.

Of course, if we ran this in "development" mode, using the devtool setting, "eval-source-map", our source-maps would contain the original non-transpiled code. We could then proceed to add break-points to the source-map code and debug our errors like a boss!

At some point, I may try to switch over to using the Angular CLI directly. But for now, I am using Webpack. Thankfully, the "@ngtools/webpack" module makes this interaction fairly low-friction. And, without too much effort, allows me to use Ahead of Time compilation with Webpack 4 and Angular 6.1.7.

Tweet This Fascinating post by @BenNadel - JavaScript Demos Using Webpack 4 With Angular 6.1.7 And Ahead Of Time (AoT) Compiling

I've tried to take this AoT + Webpack approach even further and get it working with Lazy Loading of modules:

Thank you for this demo!

I have been using Angular with Webpack 3/4 for my company's projects. All of the project compile with JIT. I attempted few times to switch to AoT but there are some old libraries were not compatible with AoT, so I stayed with JIT. I also want to try Angular CLI but most of my project are using ASP .NET Core so I need to custom a little bit Webpack, this also a reason. Now after I read your blog, I think it is a time to upgrade my Webpack config using AoT. Thanks for inspiring me.

Very cool! Super excited to be able to provide some inspiration. I hope that it is going well. The Webpack stuff -- all of it -- has been challenging for me. So, once I get something working, I tend to not touch it for a while. Hopefully you are getting there!