It's no secret that I love Angular. But, many of my teammates have a preference for React. As such, I try to keep up with React as best I can so that when I read their code, I'm not completely lost; plus, it's nice to switch up my context from time to time in an attempt to gain a broader perspective. Now, since I've been using TypeScript to build out my Angular code, I thought it would be a fun experiment to see if I could get React running with TypeScript as well. It was a bit of bumpy ride getting used to all the new Type annotations; but, I finally got something working.

First, I don't think I would have gotten this working without Basarat Ali Syed's chapter on using JSX in TypeScript. If you've used TypeScript, there's no doubt you've come across Basarat's book - it's often one of the first Google results I get when I search for TypeScript answers. Quite an outstanding resource!

That said, I started this journey by taking my Angular / TypeScript / Webpack approach and just refactoring it to use React instead of Angular. Since this will be part of my JavaScript Demos Project on GitHub, I created a separate "vendor" folder that will contain my common assets like TypeScript, Webpack, React, and Lodash libraries:

The tricky thing about having all of my vendor files in a common location is that neither TypeScript nor Webpack know where to find things automatically. As such, each of the transpilers and packagers need to be told to explicitly look in the vendor folder when trying to resolve module expressions.

For example, my TypeScript configuration file needs to know the baseUrl for module and type resolution:

My demo-local package.json file needs to know where to locate the .bin directory for npm run script execution:

And, finally, my Webpack configuration file needs to know how to resolve modules and loaders:

The Webpack config for my React exploration is basically the same as the one I use for Angular. The only significant difference is that I am adding the .tsx file extension and removing the Angular template loader.

Once I had something compiling, I went about playing with React in TypeScript. The concept was simple - create a list of contacts. But, trying to figure out how the Type system interacted with React was a bit of a hurdle. You actually don't need to add nearly as many type annotations as I did - many of the types can be inferred based on the Class Generics and the @types declaration files provided for React and ReactDOM. But, I like to over-annotate my TypeScript code in order to prove to myself that I understand the type system.

With React, each Component is based on a Generic class that is parameterized with a State and Props interface:

These interfaces take care of all of the validation for what can be passed into a component (its Props) and what kind of state it can store (its State). This means no more dealing with those messy "propTypes" validation objects - just let the TypeScript compiler handle that for you. The State interface even allows the compiler to infer what kind of return value should be allowed in a setState() callback-based invocation (though I provide a return type - Partial<State> - since, as I said, I like to over-annotate the code).

For the return type of the render() function, I just looked in the declaration files to see what was allowed. It looks like render() can return a JSX.Element type, which, according to the TypeScript documentation, is the type returned from any JSX expression:

By default the result of a JSX expression is typed as any. You can customize the type by specifying the JSX.Element interface. However, it is not possible to retrieve type information about the element, attributes or children of the JSX from this interface. It is a black box.

The other type annotation that tripped me up was the event-binding stuff. Normally, I'm used to using native Event objects; but, React uses event-delegation by way of Synthetic events. As such, event-handlers, in a React application receive parameterized synthetic events exposed on the React namespace:

This certainly doesn't cover all of the React-specific type annotations; but, this was sufficient for me to build a working demo React, TypeScript, and Webpack. The rest of the code just uses normal TypeScript annotations like you would in any TypeScript-based application.

That said, let's look at what I was able to come up with. It's a very simple contact list that allows new contacts to be added and old contacts to be deleted. Let's start at the entry point into the application - the main.tsx bootstrapping file:

Here, we're telling React to render the AppComponent in the #root node of the parent HTML document. This is fairly straightforward; but, remember from the Webpack configuration that this entry point is just one of the files that we want to bundle. In order to facilitate browser caching, we want to try to isolate the code that changes frequently from the code that changes infrequently. As such, we also want to provide a polyfill file:

Now - thanks to the Webpack CommonsChunkPlugin module - any shared vendor modules will be factored out into a separate bundle.

With the foundational file work setup, we can now look at the AppComponent being rendered as the root of the React application:

The root component manages the state of the application - the contacts list - but, more or less, defers rendering to the ContactListComponent and the AddContactFormComponent, using a one-way data flow. This means that the root component passes state down into the components and reacts to events being emitted by the components.

NOTE: You'll notice that my demo doesn't use Immutable.js. And, yet, somehow, the world hasn't ended </snarky-comment>

The root component, however, is not the only component that has state. The AddContactFormComponent also maintains state for its embedded Form data:

Having been working with Angular for so long, I had forgotten how much the React ecosystem drives you to "hyper" decompose your UI (user interface) into micro components. In Angular, what could easily function as a single UI component generally has to become several components in its React counterpart. This is because React doesn't have any mechanism (that I know of) for binding list data. As such, when you render a list that needs to react to events, you often have to break that list down into list-items, each of which receives some sort of "item" prop that it can subsequently work with and emit events on.

There's nothing wrong with decomposing a UI to this level (and it can often be good to differentiate so-called Layout components from the Widget components). But, I just appreciate that you have more choice in Angular - it can all be one UI component that gracefully binds iteration values to event-handlers; or, it can be broken up more akin to a ReactJS application.

CAUTION: Don't use .bind() to try and to bind iteration values to component event handlers. It will cause shenanigans.

That said, let's look at the ContactListComponent that uses this kind of UI decomposition:

As you can see, the ContactListComponent really just turns around and renders a collection of ContactListItemComponent's. This decomposition allows individual Contact entities to be managed in a separate context, which facilitates event binding and management. But, it also means that the props have to be passed down an additional layer; and, the OnDelete interface (for the onDelete callback) needs to be surfaced in case the calling context wants to reference it.

In retrospect, I probably should have just included both the ContactListComponent and the ContactListItemComponent in the same module. I don't see any real value-add in spreading these two components across two different files. It serves no real purpose, hurts readability, and requires this additional layer of import / export propagation.

ASIDE: I wonder if one can use BEM (Block Element Modifier) notation to drive file organization. Hmmm - let me think on that.

That said, here's the ContactListItemComponent:

As you can see, by decomposing the UI into individual React components, each ContactListItemComponent is associated with a single Contact entity. As such, when the onClick() callback is invoked, it is immediately clear which Contact the event is targeting. This allows the onDelete() prop to be invoked with confidence.

And that's basically all the code. If we compile this with Webpack:

... and the open it up in the browser, we get the following output: 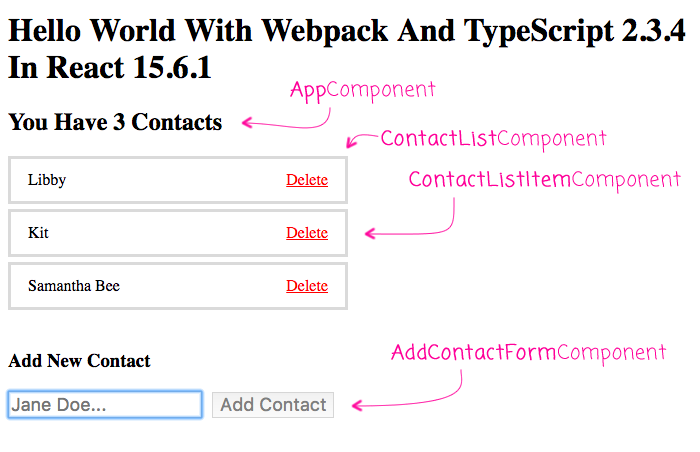 NOTE: I'm just putting the CSS in the index.htm page; I've not gotten to the Styled Components portion of my mental model.

I'm fairly new to ReactJS. All in all, I probably have no more than a month of React R&D; so, I am sure there are other ways to approach this same problem. Mostly, I was just trying to get React working with TypeScript and Webpack (so that I could more research). As such, please take this post with that perspective. But, if you do have some feedback on the React code itself, I'm always excited to learn how to do things moar better.

After doing this experiment, I didn't like how the contact-list components were broken up into different modules. I thought about using the BEM (Block Element Modifier) mindset as a means to bring logic to the module structure of the React.js application:

As someone that has spent too much time with webpack, I have to say this would be easier for someone just starting out with React and Typescript:

Then if you absolutely must know how everything is being done:

I have to get better about looking at the CLIs for various libraries. I'm the same way with Angular - it has a CLI and I think I've used it only once. The hesitation I usually have is that I'm concerned that the CLI won't work with some of my specific needs (like having a shared "vendor" folder for many of the apps across my github project). But, it could very be that the CLI can do exactly that - though, it might require even more finagling to get it to bend to my needs.