Over the weekend, I posted a PouchDB plugin that performs a bulk update operation in PouchDB. This plugin was meant to encapsulate the Get-Modify-Put workflow for updating multiple documents in this NoSQL database. The plugin didn't inspect the results in any way - it just passed them back to the calling context (via a Promise). After reading through Nolan Lawson's upsert plugin, however, I was inspired to try and add some retry logic to my bulk-update plugin. This turned out to require quite a bit more noodling than I had anticipated.

In theory, retrying a .bulkDocs() operation in PouchDB should be relatively straightforward:

Of course, dealing with asynchronous code - especially asynchronous code that contains loops - is not exactly simple. But, the real complexity of the retry wasn't the asynchronous Promise-based nature, it was the fact that a Conflict result doesn't tell you which document it was for. For example, here's what a .bulkDocs() operation might return when conflicts are present:

Notice that while a successful operation reports the doc "id", the conflicts do not. As such, it's not possible to perform a retry based on the results alone; you'd have no idea which documents to reprocess. Solving this problem, in the context of an iterative retry, took me several days. In fact, I started working on this right after I finished my last post (3 days ago), and only just finished it last night.

My solution was to keep track of both the "primary documents" and the "primary results". Since we know that .bulkDocs() method returns results in the same order in which it received documents, we know that we can match conflict results to their source documents based on array indices: 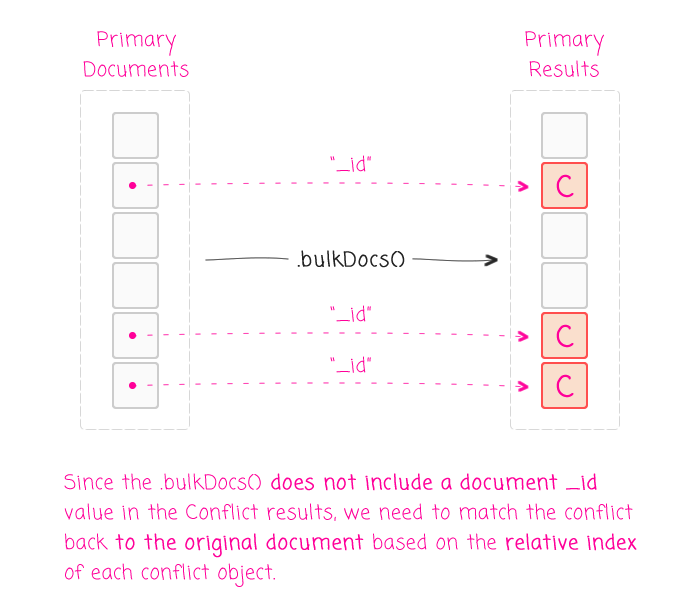 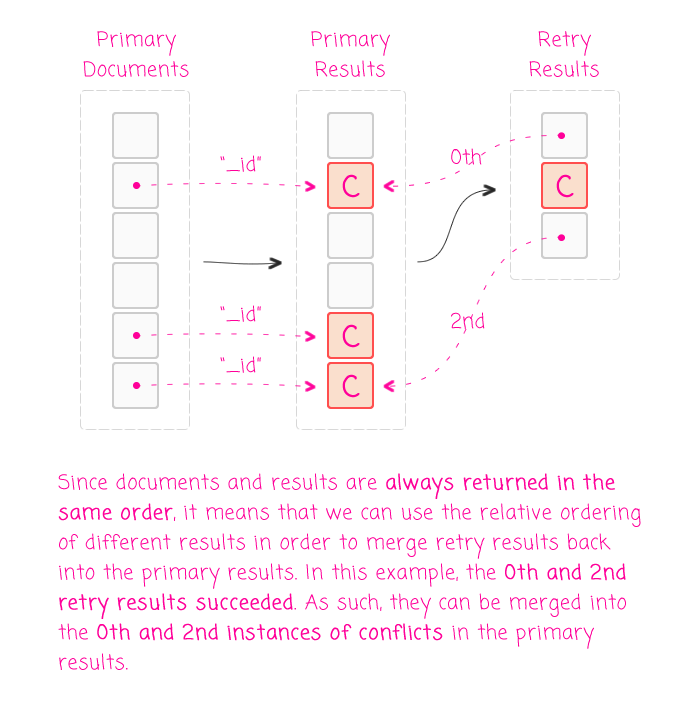 Once we have this mental model established, we can start to perform retry requests on bulk operations. However, since we're relying on an out-of-context operator (callback) to perform the document mutation, there's a small possibility that conflicts will never be resolved. For example, if the operator continually deletes the "_rev" property from each document, no amount of retry will help. As such, we want to put a limit on the number of retries we perform.

To do this, I implemented a recursive Promise chain that call itself with an ever-decreasing number of possible retries:

The key to recursion is that there must be an end to the iteration - a point at which a known result is returned instead of a call back to the same function. In this case, our recursion ends when we either run out of retry-attempts; or, if the results come back without any conflicts:

Here, you can see that the top of our recursive Promise segment will halt the recursion if the results are conflict-free or if we've iterated too many times. In that case, it resolves the current Promise segment with the current state of the primary results, which will then be passed on to the next segment of the Promise chain (which is outside of the scope of the plugin).

NOTE: This works because a named-function always has access to its own reference, even if that reference is not stored in a lexically-bound variable (so to speak). This is a fundamental feature of JavaScript and is not specific to Promises or PouchDB.

To bring this all together, let's revisit the fruit-demo in which we update each Apple document. Only this time, in order to create and resolve artificial conflicts, my update operator() is going to delete the "_rev" property from each document after the first index. This means that if N documents are being updated, indices 1..(N-1) will return as Conflict results. Essentially, on each .bulkDocs() call, only the first document will be processed successfully - the rest will have to be retried. Of course, on each subsequent retry, the "next first document" will succeed.

As you can see, each update operator() attempts to append "( UPDATED )" to the name of each Apple. Of course, this will result in conflicts which will have to be retried. After several attempts, however, we can see that the full collection of documents has been updated:

As you can see, all of the documents were updated; but, it took 2 retries to process all three documents (due to the artificial conflicts I was creating). In the video, you can see how changing the number of retries affects the results.

Getting retries to work with bulk updates in PouchDB was quite a challenge. Not only was it difficult to match results to documents for the retry, thinking about recursion is always a mind-trip. But, I think I finally came up with an approach that works and won't fall into an infinite loop.

Tweet This Fascinating post by @BenNadel - Retrying Bulk Updates In PouchDB Using A Recursive Promise Chain Woot woot — you rock the party that rocks the body!