CAUTION: I am very new to RxJS and simply trying to find my way in the world. Before you read this article, I should warn you that Ben Lesh (RxJS team lead) has characterized my desire to disconnect the "implementation stream" from the "results stream" as promoting incorrect usage of RxJS streams and a misunderstanding of the core data type. As such, please take this article with a grain of salt; this is just my opinion based on my own personal experience.

In an earlier post about creating leaky abstractions in Angular 2 with RxJS, I added a comment about the "Principle of Least Surprise"; and, while I am not sure that this Principle technically applies here, I was trying to convey that, for many people coming from other libraries like jQuery.ajax() and $http.get(), using a Cold Observable will likely lead to more surprise and astonishment than Hot Observables. This is, in part, why I will personally be using Hot RxJS Observables in my Angular 2 service layer. After I left this comment, it got me further thinking about complex service interactions; and, what would happen if you cancel a subscription during the execution of a chained set of Cold RxJS streams.

For the sake of this exploration, imagine that we have a Service class in Angular 2 that needs to fulfill an action by making two AJAX (Asynchronous JavaScript and XML / JSON) requests to the server. However, these two calls cannot be made independently - the second call depends on the result of the first call. In our demo class, we are going to use the .mergeMap() operator to continue one Http stream with another related Http stream:

Notice that the returned RxJS stream is a Cold stream. Meaning, it won't actually execute the underlying Http request until the calling context subscribes to the stream.

Now, in our Angular 2 root component, we're going to provide two options: one to subscribe to this business service stream; and, one to unsubscribe from this stream:

Because we're using the .delay() RxJS operator to simulate some network latency in our chained Http stream, it gives us the opportunity to interact with the Cold stream while it is mid-execution. But first, let's initiate a request to the Business service and let it run to completion: 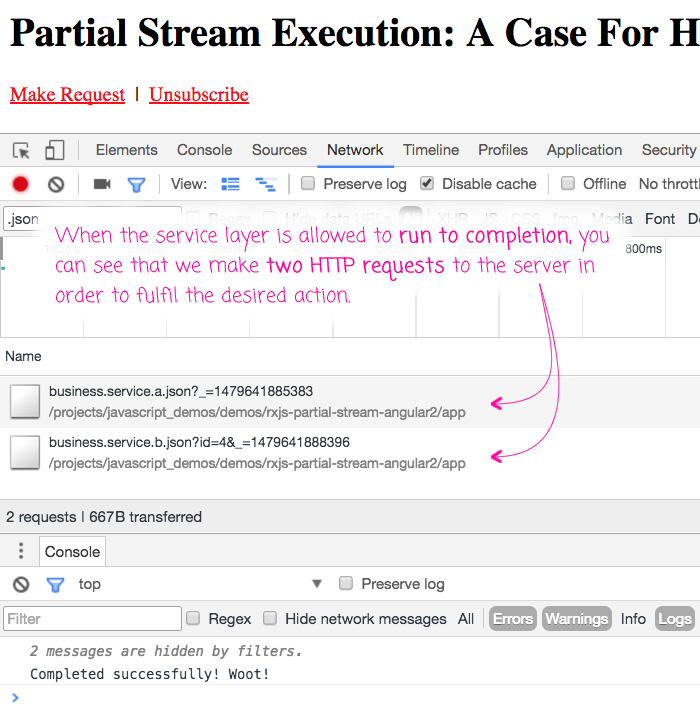 As you can see, the call to the BusinessService resulted in one stream that initiated two AJAX requests against the server.

Now, let's run the same code; but, this time, we'll unsubscribe from the result in between the first and second AJAX requests, during the simulated network latency: 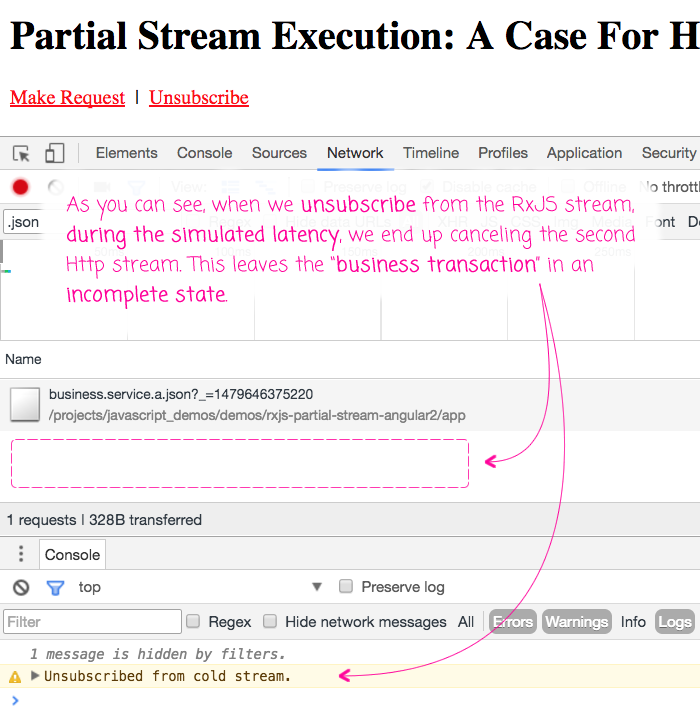 As you can see, when we unsubscribe from the service layer stream while the stream is mid-execution, we can find ourselves in a situation in which the first Http request has been executed but the second Http stream has not (and never will be). The action requested by the service layer has only been partially fulfilled.

To be very clear, I am not saying that this is a bug in any way. This is exactly how Cold streams are supposed to work (as far as I undrestand - again, I'm very new to RxJS). I point this scenario out only to try and make a case for Hot streams in my Angular 2 service layer. Had the BusinessService implemented a Hot stream, the sequence of Http requests would not have been interrupted by the .unsubscribe() call in the root component.

It's hard to talk about "surprise" when something works exactly as it is documented. In this case, the Cold stream isn't working in a surprising way; but, I would argue that the service layer itself - from a consumption standpoint - is working in a surprising way, allowing for the partial execution of commands. I believe that if I use Hot streams in my Angular 2 service layer, it will lead to less surprise and will generally be more in alignment with the type of behavior that my team is used to seeing elsewhere.

Very nice, I've not used RxJS ... but I'm familiar with Async observables... ( Java) I'm kinda thinking you might benefit from using a schduler for this pattern.

I haven't even touched on Schedulers yet :( I do see in RxJS that there is often an opportunity to define or select a Scheduled in the operations. But, I don't really have any sense of what they do. From a cursory glance at that link, it looks like its yet another layer of complexity on top of the already complex mental model of RxJS :D

It's interesting - over the weekend, I heard on a podcast that some people are floating the concept of a "cancelable Promise" for a future version of JavaScript. If that ever lands, I wonder how many uses of RxJS streams might be replaced with that.

I completely understand that RxJS does *way more* than a cancelable Promise. But, I also know that many of my use cases are quite clearly "one-off request that I wish I could cancel" type actions. Perhaps as I get more comfortable with reactive programming, the very though of a Promise will start to seem more foreign? Not anywhere close to that mindset yet.

For what it's worth, I'm staring to coalesce around Promises again in the "core" of my application:

I'll continue to use RxJS Streams in my Controller layer, and in specialized parts of the "query core"; but, the deepest parts of my business logic will be moving towards Promises.

Just continuing to evolve my understanding of all this asynchronous workflow stuff :D

You could argue that someone that is used to working with an Observable orientated API would find that an Observable that could not be retried or cancelled (at the XHR level) was a big surprise.

My preference is that if you want those semantics (can't cancel, can't retry), that returning a promise would yield a more intention revealing API.

That would then allow you, as the api designer, to show your intent of supporting cancellation and retry by returning an Observable in those cases.

I totally agree with your sentiment. I've continued to noodle on this and have actually reached a similar mental model. Now, going forward, I intend to use Promises for most of my "service layer" application logic. But, I will expose Streams if and when they make sense for exactly the reason you outline - for people who want to use streams, they should receive the kind that they expect to work with.

This way, my "commands" can't be cancelled half-way through execution. And, my "queries" may be exposed as Streams where the behavior is a value-add (ex, cancelling an AJAX request during a type-ahead interaction).