UPDATE: After getting push-back on the concept of this post, I tried to come up with a more concrete demo that explains what I mean by a "leaky abstraction" - that the return value of the method was used in a way that was not intended by the author of the method. The abstraction is leaky because the return type enables the consumer to circumvent logic in the origin method.

In Angular 2, there has been a shift in the handling of asynchronous actions - away from Promises and towards RxJS (Reactive Extensions for JavaScript). One of the big selling points of RxJS is that - unlike Promises - streams can be canceled. But, the more I think about RxJS and streams, the more I come to the conclusion that I've been using RxJS to create "leaky abstractions" in my Angular 2 service layer.

In application development, a "leaky abstraction" is an abstraction that allows underlying implementation details to leak out into the calling context. With Angular 2 services that use RxJS streams, this is exactly the kind of abstraction that I've unwittingly been creating.

The source of the data is an implementation detail.

And, the mechanics of the underlying stream should be an encapsulated, implementation detail as well.

But, what I've been doing, basically, is returning the Http-initiated streams directly from the service layer. This is leaky. And, you can tell that it's leaky because I need to subscribe() to all service-layer method calls, even ones that could otherwise be "fire and forget" calls. The fact that an external context has to subscribe() to the response in order for an encapsulated mechanism to execute fully is evidence that the underlying implementation has leaked out into the calling context.

If I dig down into my understanding of RxJS - which is admittedly very incomplete - I believe that my misstep was conflating the concept of "unsubscribe" with the concept of "cancel". When I have a Controller that unsubscribes from a Stream, what I really want is for the Controller to stop caring about the response; what I don't want - and I shouldn't want in most cases - is the underlying stream to be canceled. That's a totally different and unrelated intent.

However, when you pass an Http stream out of a Service API, that's exactly what is being conflated: unsubscribe and cancel.

To see this in action, I've created a simple FriendService that fetches a JSON (JavaScript Object Notation) file from the server. The FriendService uses the toPromise() operator and the fromPromise() observable to patch the leaky behavior, creating a point of indirection between the internal and external streams.

To test this, I created a simple root component that fetches and displays the friend data:

In this version of the code, the root component is subscribing to the response from the FriendService. And, when we run this code, we get the following output: 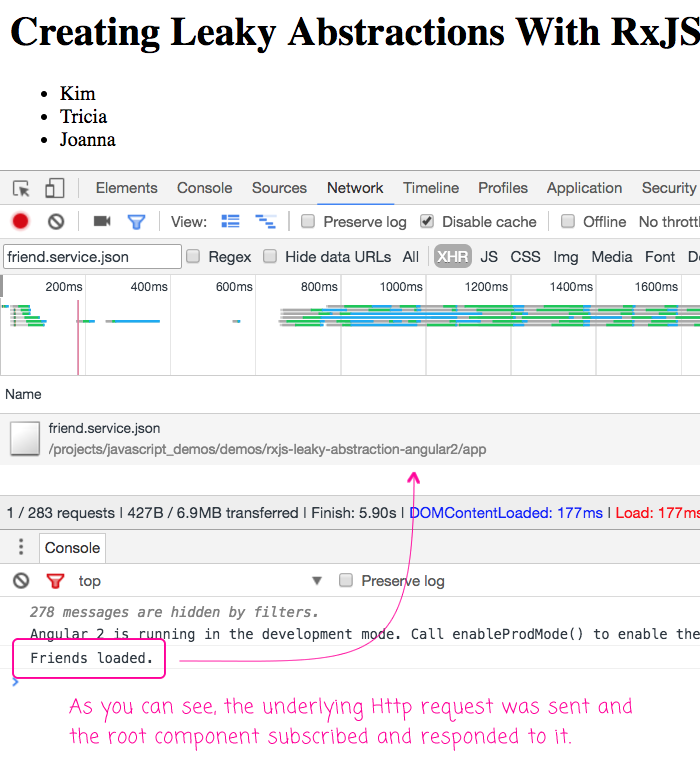 As you can see, the request to "friend.service.json" is sent over the wire and the root component responds to it.

Now, let's try this again, but forego the subscription to the FriendService response:

This time, when we run the code, we get the following output: 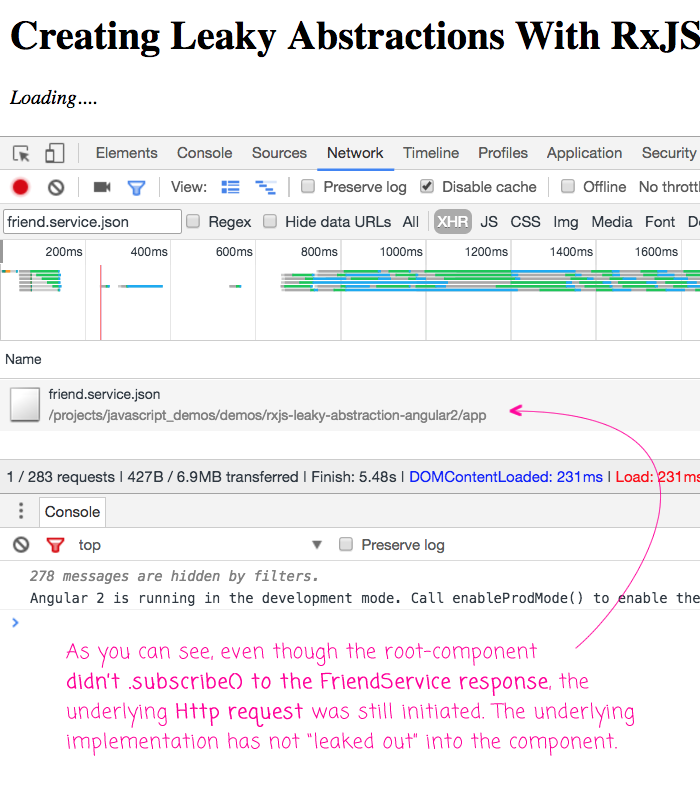 As you can see, even though the root component was disregarding the response, the request for the data still went over the wire. We have decoupled the component from the service and prevented the underlying implementation of the Http stream from leaking out into the calling context.

I had a Twitter conversation with Ben Lesh, lead of the RxJS project, and I feel like I should point out that he feels my point-of-view here is incorrect. That my approach here represents anti-patterns for Streams.

That said, I wanted to try an perhaps more clearly articulate my point-of-view:

Perhaps Ben Lesh can drop in here some time and expand on his interpretation of my perspective.

Another follow-up post to this one. Nothing fundamentally different - just me trying to create a more "canonical" RxJS solution:

... this one achieves the same decoupled approach, but does so with a shared, "hot" Observable that caches the last emitted value.

Here's a comment that I just left in another post that I think perhaps codifies my mindset nicely. To me, the use of Observables in a service layer is an implementation detail, not a fundamental change in behavior.

Perhaps the biggest disconnect is that I simply don't view Observables in a *service layer* as being fundamentally different than anything else. To me, it just seems like an implementation detail. Meaning, I could have an API that uses Callbacks:

... or refactor it use Promises:

... or refactor it use Generators (hope this one is right - I'm a noob there):

... or refactor it use Observables:

In any of those cases, I wouldn't expect the *behavior of the service* to fundamentally change - only the way in which I was listening for the response. But, if we're saying that an Observable fundamentally changes the way a service works, then I think we just have two different mental models for what a service does. In my mind, it's just an implementation detail.

I've spent a month and half noodling on all this RxJS stuff; and, as I've continued to evolve my mental model, I am now returning back to Promises for the "core" of my application:

I'm thinking about my application architecture as a layered system with the "web app" layer on the outside and the "app core" on the inside. The App core is where all the real "business logic" is and it will be broken up into Commands and Queries. The Commands portion will be Promises. All of it (that I can see). But, the Queries portion will be a mix of Promises and RxJS, when it makes sense.

And, in the web-app layer, with the Controllers, I'll use RxJS when it facilitates user-interaction workflows. Of course, Promises dovetail quite easily with RxJS streams, so I don't see any real complications here.

Thanks for your high quality posts and helpful code examples. Hope you don't mind any feedback. There any chance you can provide an update/caveat at the top of the post to your followup (www.bennadel.com/blog/3185-follow-up-creating-leaky-abstractions-with-rxjs-in-angular-2-1-1.htm)?

Sure thing, consider it done - thanks for the feedback.