The other week, as I was reading Programming JavaScript Applications by Eric Elliott, I came across a passage that didn't feel right. Or, at least felt outdated - the book was written 3 years ago. On pages 31-32, Eric talks about "anonymous functions" and how they show up in error stack traces with little helpful information. While this is definitely true for function expressions defined as part of a high-order function invocation, the book seemed to indicate that this behavior is also true for function expressions that are assigned to variables and object properties. This may have been true at the time of the writing; but, this is definitely not [or no longer] true in modern browsers.

First, let's take a look at the passage from the book, Programming JavaScript Applications:

The disadvantage is function expressions create anonymous functions unless you explicitly provide a name. Anonymous functions are used in JavaScript frequently - with reckless abandon, perhaps. Imagine that you've declared all of your functions this way, and you have a pile of functions that call functions that call even more functions. This is a common scenario in a well-architected, event-driven application. Now imagine that you're 12 function calls deep and something goes wrong. You need to debug and view your call stack, but looks something like this:

Obviously, this is not very helpful.... The baz example exhibits the same behavior. It's another anonymous function assigned to a property in an object literal. (Pages 31-32)

I am sure we can all interpret this differently; but, to me, this seemed to indicate that function expressions, assigned to variables or object properties, show up as strictly anonymous in stack traces. To test this, I created a simple AngularJS page that consumes function expressions assigned to both local variables and well as object properties: 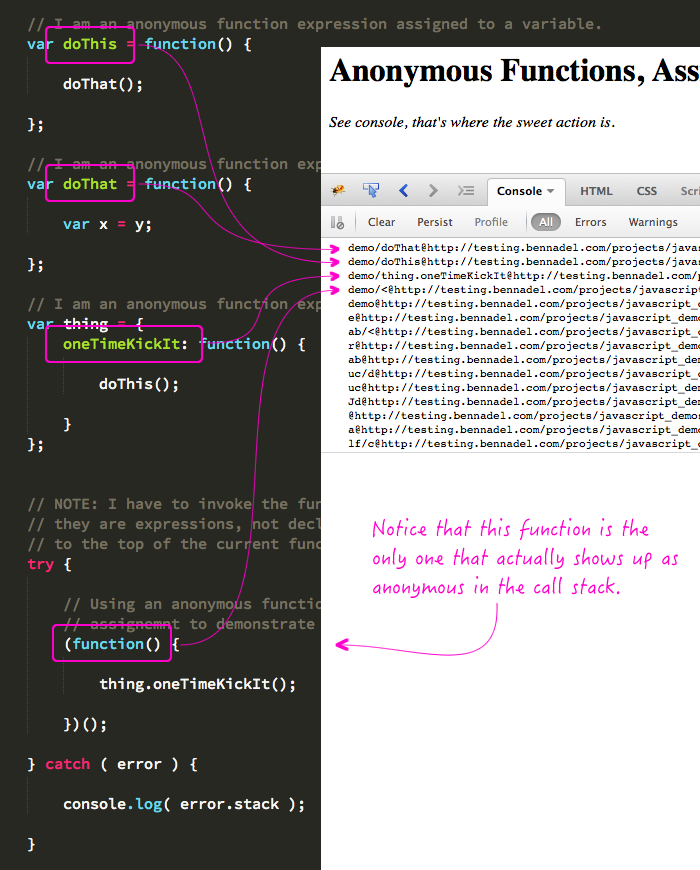 As you can see, the stack trace properly identifies the functions by the name of the reference (whether it be a variable of an object property). I tested this in Firefox, Chrome, Safari, and also tested the non-AngularJS portion in Node.js - all of them properly represented the anonymous function in the call stack.

NOTE: If you provide an additional, explicit name in the function assignment (ex, var foo = function bar(){}), the provided name [bar] is what shows up in the stack trace.

I'm happy that modern browsers have finally solved this problem. Having to provide an additional name for each function assignment would be a huge pain in the butt. That said, you should still provide an explicit name for functions defined as part of a higher-order function invocation or an immediately invoked function expression - those still show up poorly in stack traces.

You're right, but that's not the whole story.

The reason new browsers handle this correctly is because in ES6 (which browsers are starting to support), some function names can be inferred. Of course, this won't be the case on most mobile browsers for a long time to come.

Sadly, for object literal methods and concise method syntax, the name gets set properly in the callstack, but you won't be able to use it for recursion, and (at least in Babel), you won't get proper tail calls by referencing `this.methodName()`. Sad but true.

In other words, if you need to reference the function from within a method, you'll still want to manually add the name. There's a more detailed explanation and a handy ESLint rule to alert you and help you figure out what to do when you encounter that problem here: https://github.com/johnstonbl01/eslint-no-inferred-method-name

Finally, for lambdas (the functions you pass into higher order functions), you'll still want to include a name if the function is more than one line long.

So named function expressions will still have a place, even in ES6.

Nice, have noticed this improving recently but this clears things up for me - especially with Eric's explanation.

I just don't understand why the demo is using Angular?

Re: AngularJS - I think I had started the demo intending to render some UI updates based on the error. But, then, as the demo rounded out, I decided to just use the console. You are correct in not seeing any connection between the features being explored and AngularJS.

Sorry for this late post, but as I find the topic interesting, here are my 2 cents around it all. =)

Personally I have not quite understood what you actually gain by defining functions using function expressions. Apart from being sensitive to order with regards to forward references they just make the whole code so much harder to read. At least in my (slow) brain, I like to be able to quickly scan the contents of a file to get an initial fast overview of its contents. When functions are declared using function declarations they clearly stand out from the other "var" declarations and I can more rapidly come to grips with what actually will be variable in the code. Unless you have some logic where a variable during execution actually will point to different functions in a dynamic way, defining functions with function expressions really does not make much sense to me. This is especially true when you also can pass around functions declared with function declarations by reference to other functions.

Is there really any situation where a function expression is a better method than a standard function declaration? I am not being negative with this post. I am only trying to see if I can learn something new about all this. =)