In my previous post on flattening arrays in ColdFusion, I mentioned that the arguments scope in a Function body acts as both an Array and a Struct. This is a truly great feature of ColdFusion; but, iterating over such a dynamic data structure can be confusing at times. Luckily, ColdFusion also gives us the highly dynamic CFLoop tag. We can use CFLoop to iterate over the arguments scope using either Array iteration or Struct iteration.

To see this in action, I've create a function with two named arguments; but, I'm going to pass-in four arguments. Then, I'm going to iterate over the arguments scope twice: once as a Struct and once as an Array:

Now, when we run this ColdFusion code, we get the following output: 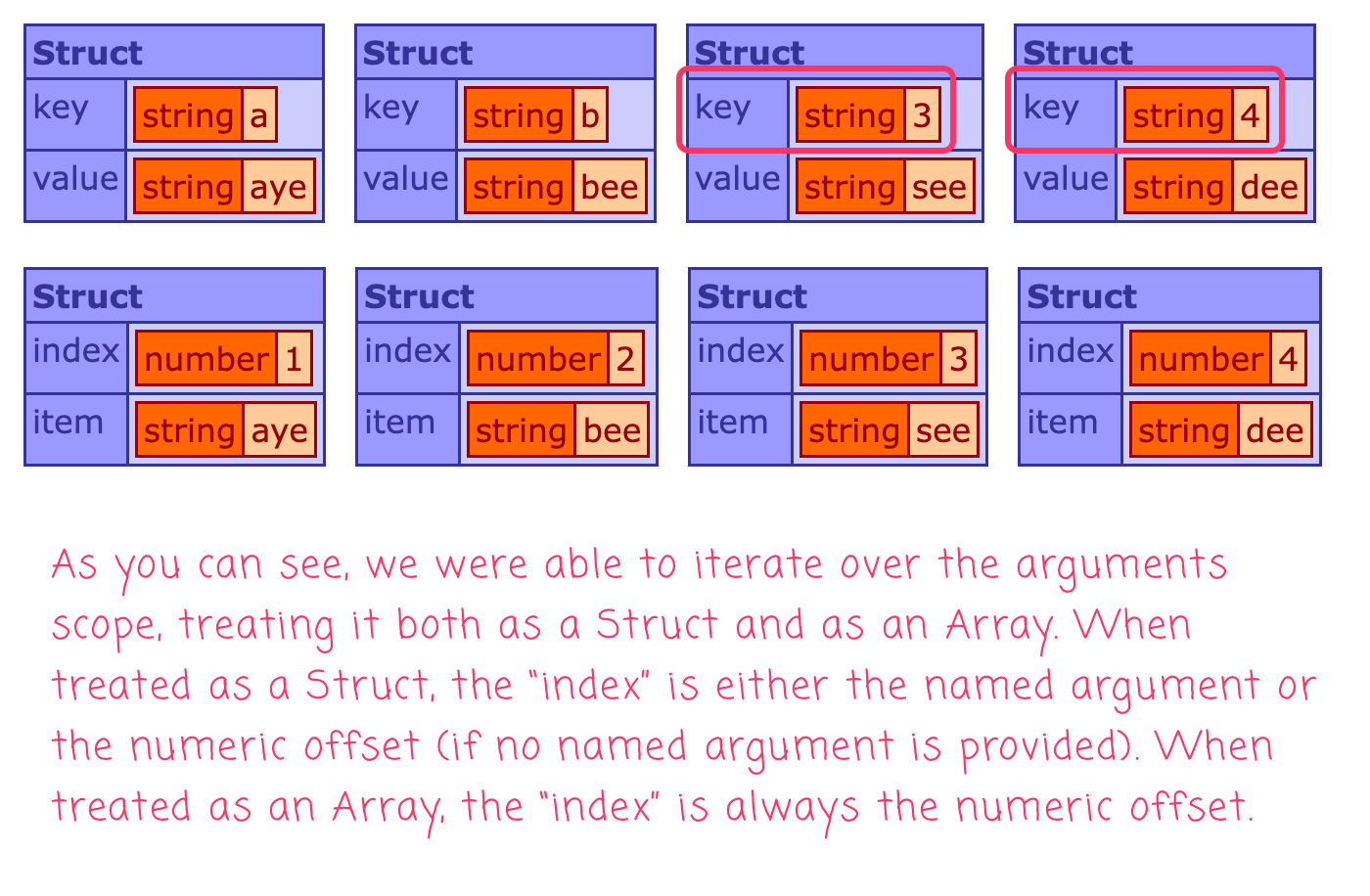 As you can see, we were able to iterate over the arguments scope as both a Struct and as an Array! Note that when treating the scope as a Struct, if we run out of "named arguments", the "index" variable will be the numeric offset of the argument.

The ColdFusion Function is a very dynamic, powerful construct in the CFML world. In fact, I listed "Named And Ordered Arguments" as one of the many reasons to fall back in love with modern ColdFusion. The arguments scope is certainly part of that power. And, the more we understand how to use the arguments scope, the better we can be at leveraging this great power.

It's also possible to iterate over the arguments scope using structEach() and arrayEach(). Frankly, I forgot these functions even existed since I moved to using member methods as often as possible. That said, at least in Lucee CFML, when I use arrayEach(), the "index" provided to the callback is the argument name, not its index.

What I truly wish would get added to CFML? Function overloading. That would be awesome. Right now, you can at least use the "default" attribute on an argument, and use cfparam, as well.

But true detection of argument types and having CFML call the appropriately flavored function would be great. But the pre-compiler would also have to recognize duplicate function signatures.

Even better would be to maintain the fuzziness of argument types, and perhaps specifically indicate a given function should be inspected for overloading.

I go back and forth on this idea of differentiating function signatures. I think there are definitely times when it would be great. But, then, I'll go and look through the Lucee CFML code (written in Java) and there's like 8 different versions of the call() method all with different types of arguments, and it feels a bit overwhelming to wrap my head around what is available.

That said, it would probably be kind of crazy to have 8 entirely differently named functions for the various combinations of arguments as well 🤣

All to say, I'm definitely curious to see what that would be like. But, it could also be a foot-gun as well.