In a recent episode of Syntax.fm, Scott and Wes discussed HTTP caching headers. From their discussion, I learned that there is am experimental value called, stale-while-revalidate. And, while this post isn't about HTTP caching, their discussion got me thinking about different ways in which I might manage a server-side cache of data that needs to be kept in-sync with a remote data source. I wanted to do some noodling of what a "stale while revalidate" workflow might look like in ColdFusion.

The concept, "stale while revalidate", usually means that your request to read a value is served immediately from a cache. Then, a background non-blocking request is spawned to fetch the latest value from the "source of truth". This allows subsequent requests for the value to receive the most up-to-date version. This allows all requests for the value to be extremely fast since they are all fulfilled using locally-cached data.

This Is An Optimization

To be clear, this is an optimization technique. Instead of reading from a cached value, we could always fetch data from the "source of truth" when fulfilling the request. In fact, trying to read from a cached value adds a good bit of complexity. As such, I would likely only attempt to use a stale-while-revalidate pattern if I was either already seeing latency issues; or, if I expecting to have a high-throughput Read scenario and I wanted to keep the emotional cost of performing that Read low for the developers.

For example, Struct access in ColdFusion is already synchronized - meaning, it is thread-safe by default. Here's a quote from the Lucee CFML doc:

Note, the type "synchronized" is no longer supported and will be ignored; all struct/scopes are "thread safe" since version 4.1.

Array are, apparently, also synchronized by default; though, I've definitely hit an Array iteration deadlock in earlier versions of Lucee CFML. And, fun fact: I just learned while writing this post that arrayNew() allows you to pass in an argument for creating non-synchronized arrays.

For this exploration, I'm going to use the runAsync() function to implement the background cache refresh. I honestly have next-to-no experience with runAsync() - the last time that I used it was in 2019. Normally, I just use the CFThread tag; or, run parallel iterations over Arrays.

That said, the ergonomics of runAsync() feel a bit lighter; though, I don't actually know if there's much of a technical difference between the task runner for this function and the task runner for the CFThread tag. In this exploration, I chose runAsync() specifically because it returns a value (a Future) that I can store. This makes it easier to know if I've already requested a background refresh.

ASIDE: The CFThread tag stores a reference to the spawned thread in the cfthread scope. As such, I could have implemented this experiment with a CFThread tag; but, it's just easier to use the returned value from runAsync().

To keep things simple, my cached value is going to be a Boolean. And, our background cache revalidation will simply flip the Boolean value. I'm going to scope the revalidation to the current ColdFusion Request. Meaning, only the first read of the value in a given ColdFusion Request will spawn the background check - subsequent reads of the value in the same request will just read from the cache and will trigger no other actions.

Here's my demo ColdFusion component, Flag.cfc. It only exposes a single method - getValue() - which returns the currently-cached value and then spawns the background cache revalidation:

As you can see, in my revalidateInBackground() method, I'm checking to see if the Future has already been stored in the request scope; and, if so, I short-circuit the method. This should ensure that - in vast majority of cases - only a single background refresh will be performed in a given ColdFusion request.

The error handling here is a bit of blind-spot for me. I know that I can't add the .error() handler since that will turn the runAsync() workflow into a blocking request, which is exactly what we don't want. I've attempted to cover my bases by wrapping both the thread-spawning code and the internal operator code in a try/catch.

That said, assuming that I've cached this ColdFusion component in the application scope, let's look at the console logging when we make several calls to the getValue() method within a single request:

Because we are caching the runAsync() Future in the request scope, only one of the preceding 3 calls should spawn a background cache revalidation. And, in fact, when we run this ColdFusion code, we get the following logs: 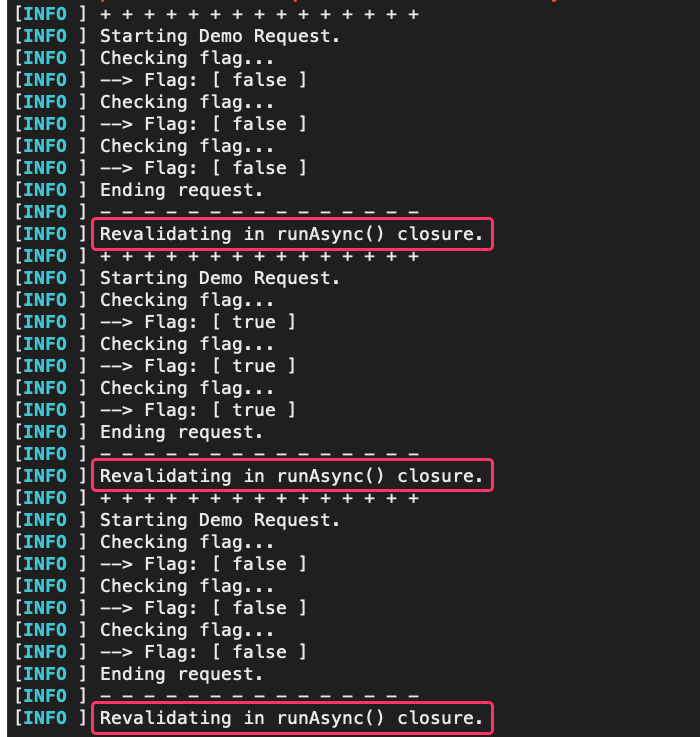 As you can see, for each ColdFusion request, we only see one log from within the runAsync() callback, despite the fact that we're making 3 calls to the getValue() method in each request. We can also see the the value of the flag is being flipped on each request, but not between getValue() calls. This is because it's being served from the local cache for the duration of the request (mostly).

CAUTION: Even though it is working out this way in my demo, the runAsync() doesn't necessarily run at the end of the current request. It just doesn't block. If other aspects of your request block (such as a database query), there's a distinct possibility that your runAsync() callback will be invoked before the end of the parent request. As such, there's a possibility that the state of the cached value will be "revalidated" within the bounds of a single request.

Again, to be clear, I've never done this in a production scenario before. I'm just starting to noodle on what this would look like in a ColdFusion application. It's a bit challenging to think through the details without a real-world use-case. But, sometimes you gotta start with the building blocks before you can assemble the larger concepts.

This is fundamentally a cache synchronization issue. And, there are many ways to keep a cache up-to-date. For example, we could use a ColdFusion scheduled task to periodically read from the "source of truth" and then update the local cache (simple, but slower). Or, we could use some sort of Publish and Subscribe (Pub/Sub) mechanism to be alerted to the changed values (complex, but fast).

What I like about the "stale while revalidate" approach is that it is relatively simple. In fact, it's really just one step beyond not caching at all. In fact, we could revert the workflow to not use caching and the change would be completely transparent to the calling context. As such, it seems to strike a nice balance between performance, complexity, and the latency of eventual consistency.

Interesting, Ben. Thanks for sharing. I'd heard the episode yesterday and the discussion of that concept caught my attention as well. :-)

But where you've gone pretty low-level and are caching at the component level--indeed at the variable level--I had heard it and wondered how one might take advantage of the idea at the page content (or partial content) level. For either, one might consider cfml caching features.

But for page-level content caching, one might consider (or already be) fronting their cf or web server with a caching solution like squid or varnish (or even nginx).

And so I'd wondered whether and how these other caching options might support this stale-while-revalidate notion, or could be made to. But I'd not gotten beyond that "wondering". :-) So I thought I'd chime in here with this idea if anyone else might either already have more to share or might dig into it themselves.

Would seem a good extension of what you started here, though I suppose the discussion could grow enough to be worth it's own post. Then again, maybe no one else will have a word to say, pro or con. :-)

So, from a "page level" caching perspective, it was actually the HTTP Content-Control header that got me thinking about this in the first place. There is a stale-while-validate header value that will allow the browser (as I understand it) to do this naturally. ie, to use the locally-cached version and then check for an update in the background. Of course, that's on a per-user basis, not a per-page basis since it's controlled by the client.

That said, if the request was going through something like CloudFlare, I wonder if the CDN would also follow the caching headers for how it handles point-of-presence caching?? Not sure.

I'm pretty sure that back-in-the-day, Ray Camden had a ColdFusion custom tag that would cache the this.generatedContent output of the custom tag. So, that would do a sort of "run once" of custom tag and then use the cache going forward. I wonder if there's a way to re-run the custom tag "body" in the background?

After this post, I started to think about shared access of variables in native ColdFusion data types; and, I started to wonder if my mental model for iteration over shared data structures is out of date. As such, I wanted to do some experimentation in ACF + Lucee CFML:

From what I can see, read-only iteration over Arrays and Structs is thread safe (at least by default - you can ask ColdFusion to create non-thread-safe arrays).