At InVision, I've been working with Holger Schueler to generate some internal reports regarding how different users end up in an enterprise context. One of the reports creates a Tree structure of cascading "invitations" (ie, this user invited another user who, in turn, invited three more users). In addition to rendering the tree structure visually, Holger would also like to download the tree structure as a CSV (Comma-Separated Values) file in which each row in the CSV contains a distinct path within the tree structure. This is a data translation that I've never actually done before. So, I wanted to sit down and figure it out in Lucee CFML 5.3.7.47.

A year ago, I looked at using while loops to perform depth-first and breadth-first traversal of a tree structure in Lucee CFML. To find the unique paths within a tree, I'm going to use the same traversal technique; except, in addition to walking the tree, I'm also going to be aggregating the nodes into paths.

Once you understand how to use a while loop to perform the tree traversal, the complicated part becomes understanding how to manipulate the aggregate path as you move from node-to-node. For example, one node might be at depth N; then, the next node could be at depth N+1 or something radically different like depth N-10. It all depends on the structure of the tree: 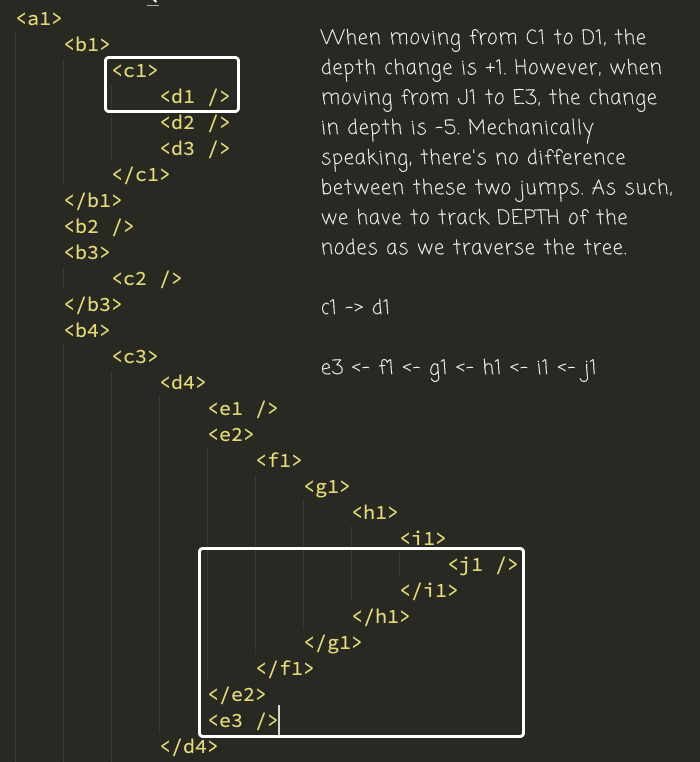 To deal with the erratic depth changes, we have to store the depth of each node as we're performing the tree traversal. This way, as we reach each node, we can use its depth to readjust the current path aggregate. For example, imagine that we are at the current path:

... such that we can then append the new node at the target depth, 3:

Once I figured this approach out, all I had to do was update my queuing technique to store a "node location" rather than just a node. This location would contain the depth and the node in a single structure.

Here's the algorithm I finally came up with. To explore this concept, I'm using an XML data structure since it's easy to understand visually and make creating the sample tree data very easy:

And, when we run this depth-first, path-aggregation algorithm in Lucee CFML, we get the following page output:

As you can see, each unique branch path in the tree has been represented as an individual line in this output; with, common ancestor nodes being repeated as necessary. And, now I know one possible way to represent a tree structure as a CSV file.

These kind of explorations are fun - so much of my work is just CRUD (Create, Read, Update, Delete), it's nice to have to think about something that requires a different part of my brain. And, I love how simple so much of this is thanks to Lucee CFML.

Tweet This Interesting post by @BenNadel - Finding All Unique Paths In A Tree Structure In Lucee CFML 5.3.7.47 https://www.bennadel.com/go/3989

It's amazing how I can read and understand Lucee to an extend even when I don't know anything about it.

It's also interesting that Lucee Array starts at 1

Sir, you don't even know how much your comment means to me :D I am so thrilled to hear that Lucee CFML is easy to ready. I totally agree; but, I've been doing it for so long, I lose sight of what is real and what is not. So, to hear you say that, it is heart-warming.

Arrays starting a "1" takes a moment to get used to when you come from another language. But, it has some great benefits. For example, if you are finding an index within an array, you can treat "1" as a Truthy:

Since a "not found" value will return 0, which translated to Falsy. This is in comparison to other languages that are 0-based and have to return a -1 for "not found", making the equivalent statement something like:

Of course, there are higher-level constructs that can remove some of that friction. But, there's other things where you would normally have to length-1 in other language that you don't have to do in ColdFusion.

I completely agree with the Array length being the true length which also limits the need for extra subtraction and many other things that come with it.

I really appreciate the effort you add to share your experience with real-life examples as well.

Thank you :) I will keep up the good work!