The other day, in JavaScript, I wrote some code that required three nested for-loops in order to locate data for consumption. The JavaScript code looked something like this:

This is hella ugly; and, on some level, "feels wrong" in a way that I can't fully articulate. As such, I thought it would be a fun to try and figure out a way to encapsulate this nested looping using some sort of a "Visitor" Function. Meaning, create an algorithm that takes an object graph and an operator and then have it invoke said operator for each desired leaf-node within the graph.

A couple of months ago, I looked at depth-first vs. breadth-first traversal; and, how we can use a Closure to separate tree traversal from node consumption in Lucee CFML. But, in those posts, I was visiting all nodes within an object graph. And, in this post, I wanted to look at visiting only a set of desired nodes.

The algorithm that I came up with for this post is similar to the previous ones in that it uses a "stack" to keep track of where it is in the object graph (as opposed to messing around with recursion). But, the difference in this algorithm is that I also need to keep track of the ancestor nodes so that I can pass them to the "visitor" function.

Ultimately, what I want is to be able to call something like this, where I provide a root collection, a set of keys to traverse, and a callback that gets invoked with each instance of the key-values:

To experiment with this idea, I set up a static data-structure with Users, Projects, Screens, and Comments:

As you can see, I have two users - Terry and Arnold - who each have a set of Projects, Screens, and Comments, each with a "name" property that helps me make sense of the eventual output.

Here's the algorithm that I came up with - in this demo, I'm going to use an increasingly-deep set of keys. This way, you can see how the existing of a leaf-node changes the behavior of the visitor:

As we visit each node within the object graph, we keep prepending items to the stack. And, as we move deeper into the graph, we keep a running aggregation of the ancestor nodes that will be used to invoke the operator (visitor function). Now, if we run this ColdFusion code in Lucee CFML, we get the following output: 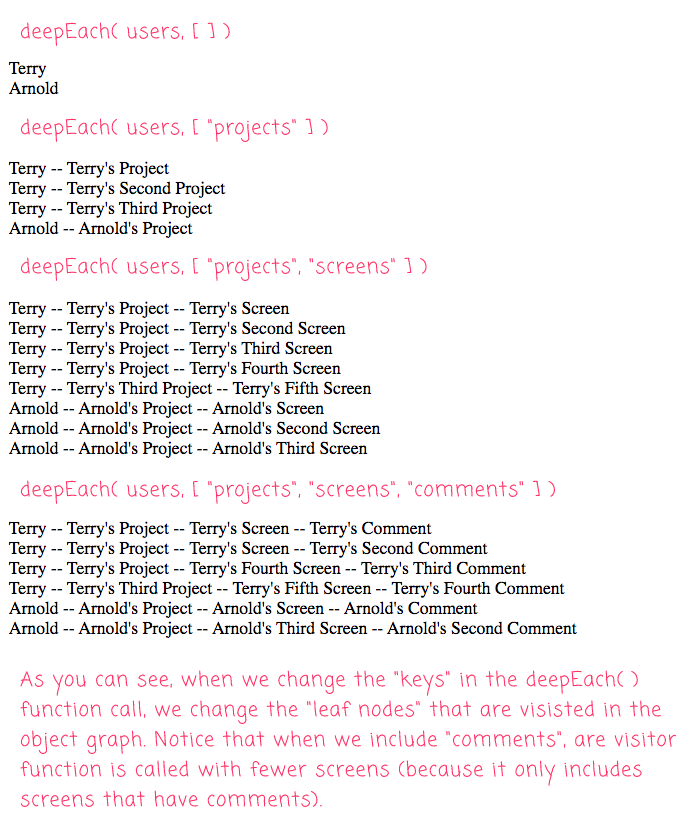 Anyway, just a fun little code kata to kick off my Friday. I haven't blogged as much because I've been quite stressed. So, this is just me trying to kick-start my creative engine.