The other day, I took a look at using CFMailParam / custom SMTP headers to include debug data in outbound emails in ColdFusion. In the comments to that post, Aaron Terry mentioned that my approach was fine from a "generic" standpoint; but, that most of the Email SaaS (Software as a Service) providers include special functionality for this very purpose. And, in fact, he pointed me to Postmark's metadata documentation. It turns out, if I include SMTP headers with the prefix, X-PM-Metadata-, Postmark will parse and remove those headers before the email reaches the end-user. This is an awesome feature! And, one I wanted to try for myself in Lucee CFML 5.3.6.61.

In my previous post, I was simulating a user-submitted comment in InVision; and, I was included context-specific SMTP headers that could help debug comment delivery and/or functionality issues:

According to the Postmark documentation, there are a few key constraints for how the metadata fields work:

With that said, let's look at the revamped ColdFusion code:

As you can see, I'm using the CFMailParam tag to include custom SMTP headers that start with the X-PM-Metadata- prefix. Now, when we send this email out using the CFMail tag and look in the Postmark App UI, we see the following: 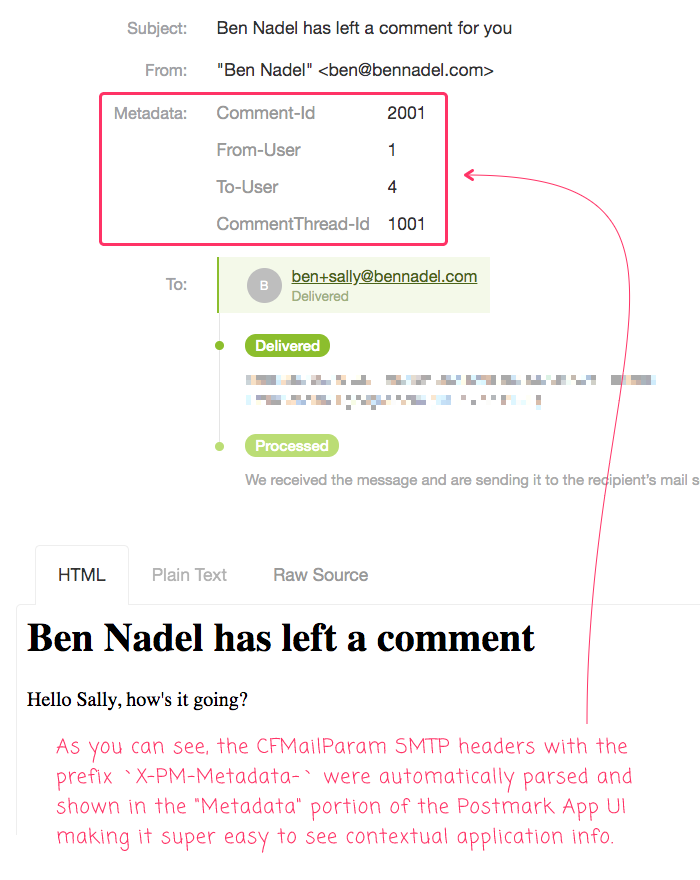 As you can see, our custom SMTP headers were parsed and displayed very neatly in the "Metadata" portion of Postmark's App UI. How awesome is that! And, as a special bonus, none of those SMTP headers reach the end-user. If I look at the raw source of the email that ends-up going to Sally, none of these headers are present.

A huge shout-out to Aaron Terry for pointed me in this direction. It seems that in the 8+ years I've been a Postmark customer, I've been negligent in following up on all of their subsequent feature releases. It's time for me to look through their documentation and see what other bits of magic I might be able to leverage at InVision in Lucee CFML.

Now this is a much cleaner approach. I prefer that the end user doesn't see our debugging data, even though most users won't have a clue what it means:)

The only issue, is that I will need to pay for yet another 3rd Party API Service.
I am already using SparkPost, so I will see, if they have the same feature set. It is quite likely that they will. As most of these mail services are in fierce competition with each other.

Thank you for providing yet another informative tutorial.

On sparkpost, it's the metadata struct within X-MSYS-API header.

Like Sendgrid's X-SMTP-API header .... you embed a JSON struct in that header that controls a slew of options and features, with custom metadata being one of them.

Thank you for the advice.

I will have a look for this feature, the next time, I log into my SparkPost dashboard.

Yeah, agreed - this feels much cleaner. Glad to hear that SparkPost has a similar thing.

A quick related follow-up post on using Tags in Postmark:

Tags, like Metadata, uses a custom SMTP header, X-PM-Tag, and allows us to both view and filter Postmark's activity stream based on Tag values. This is gonna be awesome!

Wohow, I love PostmarkApp as well and this adds so much usefulness to track down important emails. Had never even read/realised this could be done. Your code comments are, as always, super helpful too!

Awesome, so glad you found this helpful :D