The other day, as I was using the Slack chat app at InVision, I happened to notice that the scrollbar in the Channels column is only visible when I'm mousing-over the Channels column. I recently explored the idea of conditionally showing scrollbars on hover in Angular (based on GMail's implementation); however, Slack's scrollbars aren't just conditionally rendered, they also overlap with the viewport content - something that a native scrollbar (on Desktop) won't do. Clearly, something quite cleaver is going on. So, I opened up the browser-based version of Slack and took a look. And, what I saw was totally fascinating. So much so that I wanted to see if I could copy Slack's brilliant virtual scrollbar and overflow container implementation in Angular 9.1.12.

The brilliance of this approach is that Slack doesn't need to re-implement all of the native scrollbar behaviors - the overflow container does a lot of the heavy lifting. As such, Slack only needs to re-implement the direct scrollbar interactions. This creates a much smoother, much more consistent experience over other virtual scrollbar solutions that attempt to re-implement the )entirety of an overflow-scroll behavior. 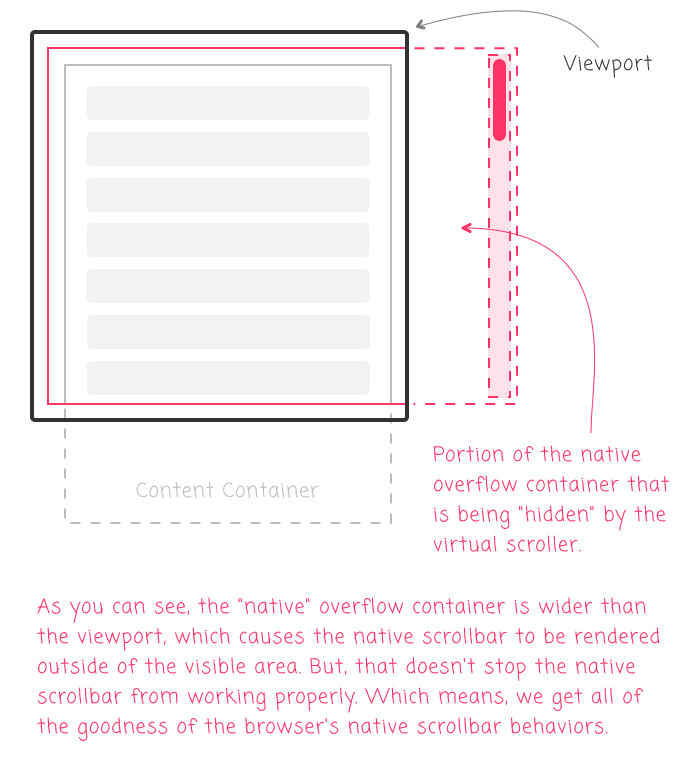 It's just that, the user can't see the scrollbar in the overflow container as it is being hidden by the viewport's narrower width.

Of course, Slack still needs to show some sort of scrollbar for a good user experience (UX). As such, it stacks a virtual scrollbar over the content of the viewport. Slack then needs to implement some of the native scrollbar behaviors on top of the virtual scrollbar; but, the vast majority of the work is already being done by the browser.

The virtual scrollbar only needs to implement the following behaviors:

These aren't trivial behaviors (especially the drag behavior); but, this is much less work than Slack would have had to do had they completely reinvented the wheel.

So now the fun part: trying to implement this dual native scrollbar / virtual scrollbar using an Angular 9.1.2 component. The first thing I did was set up my test environment, which is just a simple App component that generates a few hundred Slack channel names:

These channels are then rendered using content projection and a custom Angular component:

The <app-slack-scroller> component is what is implementing the overflow container and the virtual scrollbar. And, when we run this in the browser, we get the following output:

To implement this, here's my virtual scroller's HTML:

As you can see, we're using content projection to render the list of Slack channels inside an internal viewport. But, the .viewport element is actually wider than the host element, which is what hides the native scrollbars from view: 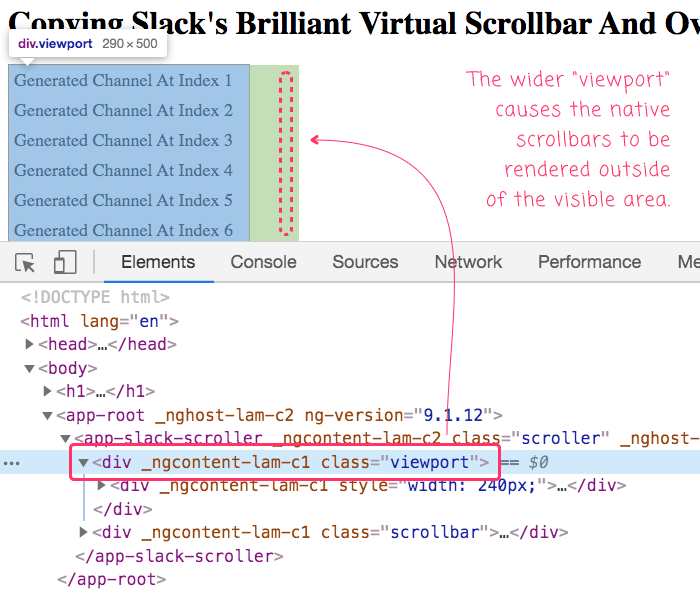 This is done using a -50px absolute positioning of the right border:

Now that we see how the native scrollbar is being hidden via CSS, let's look at how the virtual scrollbar behavior is being implemented. For my approach, I am looking at the scroller as having three distinct states:

I've tried to include a lot of comments in my implementation, so I won't go into much more detail. I'll just provide the code as-is. One thing I will add, though, is that all of my event-bindings are being done inside the TypeScript, not in the view. I did this for two reason:

NOTE: To be clear, this is my implementation, not Slack's. I have no idea how Slack built theirs; and, I'm pretty sure they also include "virtual scrolling", where they dynamically add and remove content as the user scrolls. My implementation is "static".

As you can see, there's quite a bit of logic in here; and, that's just to re-implement a small subset of the browser's native scrolling behavior. One can easily imagine the monumental amount of code it would take to fully implement a scrolling container. That's what's so exciting about this approach - it implements only what it needs to and leans on the native browser behavior for the most complicated parts!

Anyway, this was a really fun exploration of Slack's virtual scrollbar in Angular 9.1.12. This took me about 3-mornings to get working in a way that made me feel good about it; but, I think that was time well spent.

Ben. This is very interesting.

I have used a library called perfect scrollbars for several years. It tries to emulate the event handling side of scrolling, which makes it a little janky:

What's interesting, is that the author of this library, never saw the simplicity of your approach.
I am fairly sure this solution didn't require any new language features, although I could be wrong, as I haven't really analysed the issue in any real depth.

Sometimes if you look at a problem for long enough, answers reveal themselves, organically.

This begs the question, how many other libraries could be fundamentally improved by applying a completely different approach to the same problem.

Thinking outside the box can be extremely rewarding.

I think the real moral of this story is that if you see something that looks slightly out-of-the-ordinary, it pays to pop-open those Chrome dev-tools and take a look at what is going on. The only reason I even thought to look at Slack's implementation was because the scrollbar was overlapping with the content (in a transparent kind of way). And, I was like, "Hmmmmmmm" :D

Hi Ben,
Very interesting write up. it's very clever of slack, I did not think it was possible without implementing custom scroll bars from scratch.

Yeah, I really like this for that reason - we get so much right out of the box with this approach. We only have to "patch" the dragging of the "thumb" (which most people don't do anyway since most people are using scroll-wheels and magic-mise and things of that nature). So, with not too much effort, you get a custom look-and-feel, but still get to leverage all the power of the browser's native capabilities.

I absolutely hate hate hate disappearing scrollbars. They are a UX abomination. At the very least, if you are going to do this, you need to respect the users wish to always display scrollbar (On Windows, in accessibility settings). Both Teams and Slack abuse this.

I actually tend to agree with you on this. I'm on a MacOS and I always turn on the "always show scrollbars" setting. I find it so strange to ever have an overflow container that isn't obviously scrollable.

What's odd about Slack is that desktop app always shows the scrollbars where as the web app is the one that conditionally hides it. I wonder if that has to do with how the two apps are honoring the user preferences. Makes me wonder if there is a CSS media query for the scrollbar preferences.

And, just as a note, what I loved about how Slack was hiding the scrollbar was more about the technique that they were using, as opposed to the fact that the scrollbar was being hidden. All so say, I'm generally on the same page.

I think it is all about giving the impression that there is as much screen real estate as possible, on the mobile. But, I don't think creating illusions should override UX. So, I must agree with both of you.

But, I think we need to appreciate that this is more about how to emulate a great technique, rather than the pros and cons, on whether scroll bars should be visible, all the time, on the mobile.