The other day, I came across an interesting post on David Walsh's blog about preventing body scrolling. In his article, he was using the CSS property, "overflow," to disable and re-enable scrollbars on the Body element. I had never seen this done before and it got me thinking about how I might implement this approach in an Angular 5 application. This is an especially interesting problem considering that the Body element is outside of the Angular 5 application boundary. To help keep my Angular components decoupled from the parent page, I've encapsulated the scrolling functionality inside a WindowScrolling service that can, itself, be consumed within the Angular component tree.

A few weeks ago, I created an Angular attribute directly called [trapScroll] that would trap mouse wheel events and prevent scrolling in a parent element. This directive is intended for use in an "overflow: scroll" context; but, such an approach could also be used to prevent scrolling on the body element. However, an attribute directive isn't always so easy to apply. For example, in a routable view, there is no component element on which to bind the [trapScroll] directive.

As such, there are cases when it makes sense to provide an Angular service that specifically deals with the window / body scrolling functionality. For example, if I route to a Modal window, it would be nice to disable and then re-enable body scrolling when the modal window is opened and closed, respectively. This way, as the user is interacting with the modal window, they are not accidentally causing a scroll in the hidden (or mostly hidden) Body element.

To experiment with this idea, I created a WindowScrolling service that exposes two public methods:

In this service, I'm making direct calls to the global document object. Generally speaking, this is frowned upon in the Angular world because it couples the application to the Browser environment (as opposed to the Server environment). I tried to use the Renderer2 service to maintain some degree of indirection; but, it seems that the Renderer2 service cannot be injected into a "Service" - it can only be injected into a Directive. Because of this, combined with the fact that I am completely befuddled by the idea of running an Angular app in any other context than the Browser, I decided to just reference the document directly and let my WindowService be the point of abstraction. 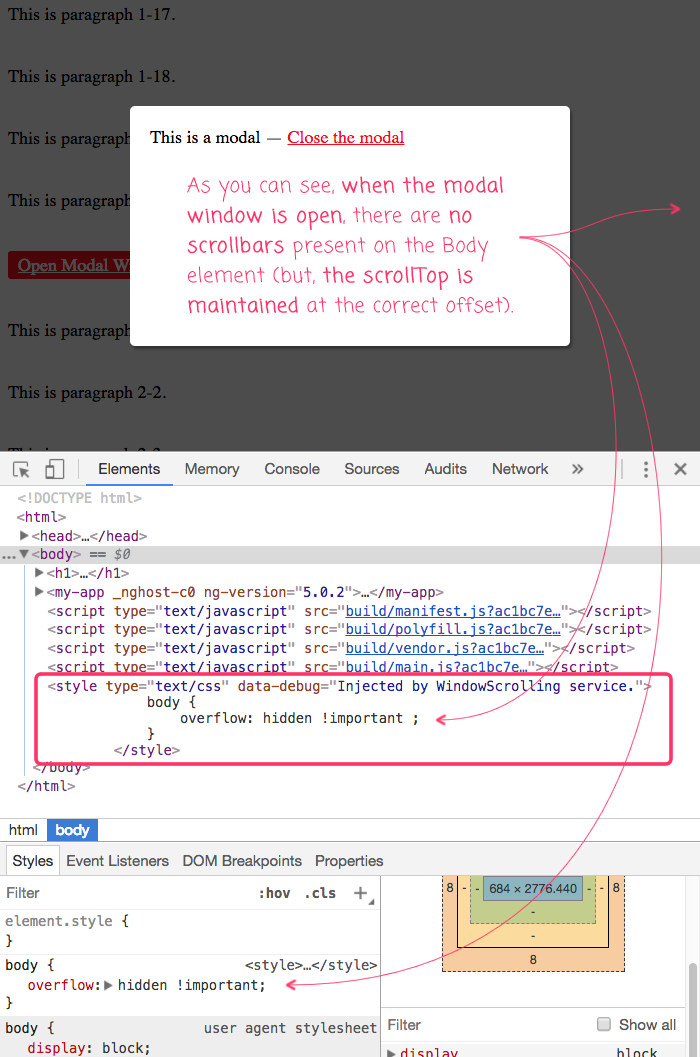 And, when the modal window is closed, the WindowScrolling service will remove the Style tag, effectively re-enabling scrolling on the Body element: 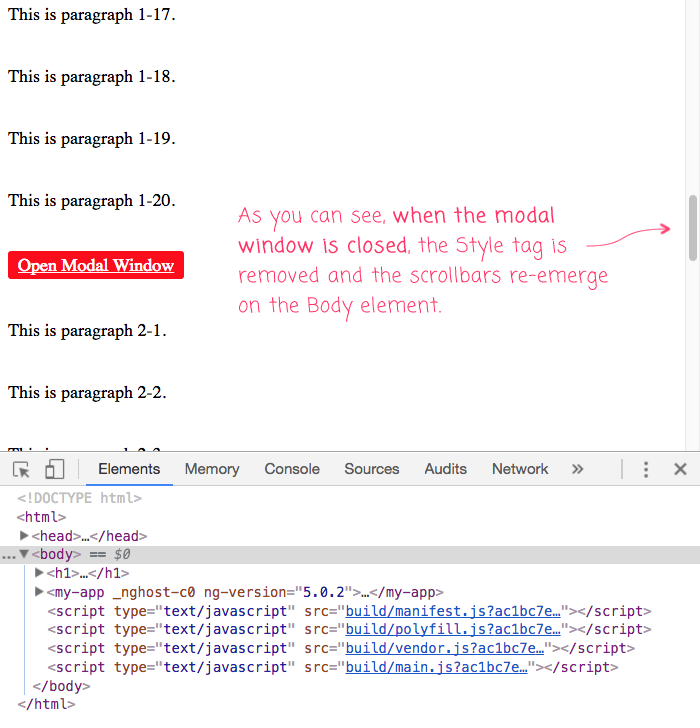 Apparently, this "overflow: hidden" trick has been around for a while; but, it's the first time that I've seen it. Ironically, after reading Walsh's blog, I found out that we actually use something similar in our production app. So, it seems like I'm fairly behind the curve on this matter. That said, I love the fact that we can easily prevent Body scrolling with a simple style change. Apparently this doesn't work as well on mobile devices; but, I don't think that such platform differences detract from this approach in the least.

Tweet This Fascinating post by @BenNadel - Prevent Body Scrolling With A WindowScrolling Service When Showing A Modal Window In Angular 5.0.2 https://www.bennadel.com/go/3374

overflow: hidden; doesnt work with mobile safari, so it will require extra js for (touchmove) event

Very true. That said, I consider this feature a "nice to have", not necessarily something that is absolutely required. So, if it doesn't work on a mobile device, I'm not overly concerned. I am not even sure that a modal window, in general, is a great UI to have on a mobile version of an app. Of course, I don't really have all that much mobile-dev experience, so please take that with a grain of salt.

Hi I am getting the following error after installing this service. Kindly tell me how to remove this error :

The "Can't resolve all parameters" error usually means you are not including something as a Provider somewhere. So, Angular is going to try to pull your constructor arguments out of the Dependency-Injector; but, it can't find anything that matches your token.

Looking back at my code, I don't seem to be defining any meta-data for the WindowScrolling service. In newer versions of Angular, you would do something like:

This would replace the providers item in the AppModule. It automatically provides the WindowScrolling service as a provider. But, even if you don't use the providedIn approach, I still think you need the @Injectable() meta-data on your Service. Honestly, I am not sure how my demo even compiled :D

Thanks for the article Ben.
In fact you can inject Renderer into a service using RenderFactory.
This is the same service, using renderer2:

Interesting. I have not seen the RendererFactory before. Do you know if this is a "suggested approach"? Or, is this more of a hack that happens to work? Meaning, if there's not a more intuitive way to get the current Renderer, is it possibly an indication that a Service shouldn't be coupled to the Renderer?

At the end of the day, you're gonna be coupled to something; so, you either couple directly to the window, document, and body' or, you couple to the RenderFactory. So, perhaps its more or less the same thing.

I think you're right about coupling. Something's gotta give in a real-world app.

Regarding using that approach, I believe it's somewhere in the middle: it's not recommended by best practice, but Angular seems to be using it internally in their APIs, as can be seen here:
https://github.com/angular/angular/blob/e3140ae888ac4037a5f119efaec7b1eaf8726286/packages/core/src/render/api.ts#L129

Thanks for the links, I will take a look. One of the most helpful things about the Angular docs is that every doc page links directly to its source in GitHub. It's awesome for seeing how things are working under the hood. That said, sometimes the "under the hood" stuff is so complicated, I can't even make heads-or-tails of it :D

Thanks for your reply It's working perfect now. Thanks again.