At InVision, when a user goes to upload a screen for an interactive prototype, we have the browser upload the file directly to S3 using a pre-signed URL. We've been using this technique for years and it's worked perfectly well. However, we now have an Enterprise client whose network is blocking all calls to Amazon AWS. As such, they are unable to use pre-signed URLs for their file uploads. To try and get around this issue, I wanted to see what it would take to proxy uploads to Amazon AWS S3 through our application using the CFHTTP tag and Lucee CFML 5.3.6.61.

ASIDE: This isn't the first time that I've looked at proxying files through ColdFusion. A few years ago, I created a fun little project called "Sticky CDN", which was a content-delivery network (CDN) designed for your local development environment. It was intended to cache remote files on the local file-system. My current article uses the foundational concepts from that CDN project.

To explore this concept, the first thing that I did was go into the ColdFusion code that generates the S3 pre-signed (query-string authenticated) URL, intercept the response payload, and then redirect the URLs through my local development server. In the following truncated snippet, the "data" payload contains a collection of pre-signed URLs that the browser will use when uploading the files directly to S3:

As you can see, I'm redirecting the uploads to my experimental "s3-proxy" folder locally. And, I'm passing-in the original pre-signed URL as the remoteUrl. Now, in the "s3-proxy" folder, all I'm going to do is take the incoming file-upload (binary) and pass-it-on to the given remoteUrl.

When performing this pass-through, I want to be sure to:

When the browser uploads the file to my ColdFusion proxy, it is going to do so by sending the file as the request body. As such, I can access the incoming file using the getHttpRequestData() function:

As you can see, there's not too much going on here. I'm just using the CFHTTP tag to implement the original pre-signed URL request. Then, I'm taking the response from Amazon AWS S3 and I'm doing my best to return the HTTP Headers and response content that S3 gives me.

Now, if I open up Postman and try to upload a picture of my dogo through my local development proxy in Lucee CFML, I get the following output: 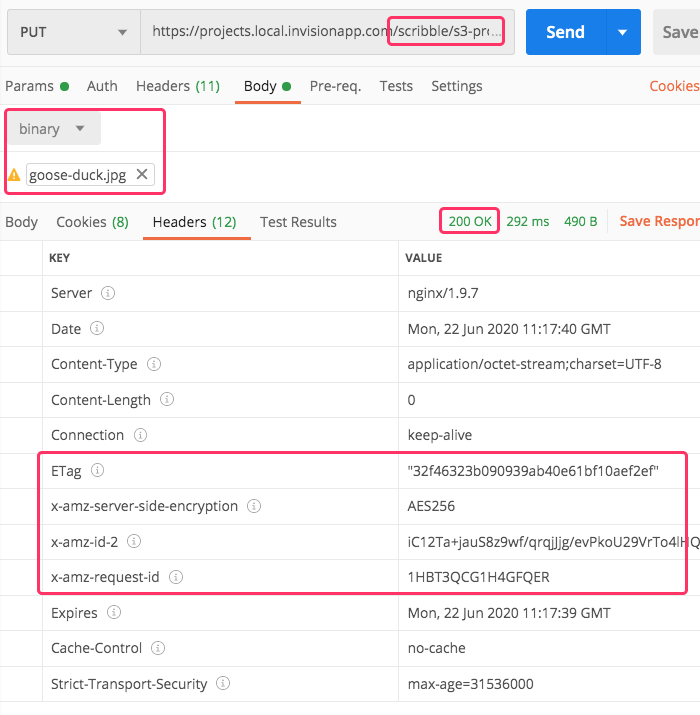 Ultimately, we'd love for the browser to upload directly to S3. Doing so removes load from our servers; and, removes our application as a potential point-of-failure in the upload mechanics. As such, it's unfortunate to have to proxy an upload to S3. That said, it's pretty cool that the CFHTTP tag and Lucee CFML make implementing a proxy fairly painless.

If I were to deploy this to a production server, I'd want to lock the proxy end-point down in some way. Right now, it just generically proxies any HTTP request; which doesn't necessarily open us up to a "security threat" per-say but, could allow people to send load / traffic through our servers, which we obviously don't want (and could even have legal implications).

Locking it down could be as simple as ensuring that the pre-signed URL, in the url.remoteUrl parameter, points to the customer's S3 bucket.

My original idea for this was to implement the proxy using Netlify's Lambda Functions feature. This way, the uploads would still be off our servers and would be fronted by Netlify's global CDN. But, it seems that Netlify functions don't currently allow for binary data. It would have been pretty cool, though!

I was able to get it to work fairly easily using Axios in the development server for Netlify Lambda Functions (which happily provides binary payloads as a Buffer in Node.js). But, once deployed to Netlify's edge-network, said payloads staring coming through a corrupted String values.

One thing I ran into here was that if the Connection Fails, the status_code is reported as 0. Well, it seems that - at least in Chrome - if you send back a status code of 0, the request just hangs. As such, I've been using this:

This appears to allow the browser-request to at least complete.

A quick follow-up on this. As I mentioned in this post, I had originally tried to do this with Netlify Functions; but, at the time, Netlify functions didn't properly handle application/octet-stream content properly. Well, a few weeks ago, they fixed this issue, which means that the timing was right to expeirment with using Netlify:

It's the same basic idea; only, I'm using a Netlify Lambda Function + Axios to perform the proxy rather than Lucee CFML and CFHttp. Everything else is roughly equivalent.