As much as I love databases and writing SQL, the reality is, I'm not a "database admin". And, I don't have the best grasp of how databases work their magic under the hood. This leaves me open to many misunderstandings; one of which appears to be the way that the CFQuery and CFQueryParam tags work with the MySQL JDBC Driver (MySQL Connector/J 5.1) when used in ColdFusion / CFML. I believe that my understanding of the caching and performance benefits have been way off-base.

To set the stage for this post, I've been thinking a lot about my use of the CFQueryParam tag within IN () clauses; and, specifically about how the CFQueryParam tag works with lists of values; and, how those dynamic queries may be filling up the prepared statement cache in the database (since a new prepared statement would theoretically be created for each unique-length of IN () value).

With that said, earlier this week, I went to see how many prepared statements were being cached in my local MySQL 5.6 database:

... which gave me the following:

Ummmmm, wat?! Where the heck are all my prepared statements? 99% of my CFQuery tags include a CFQueryParam tag - I was expecting this number to be in the thousands.

When I saw this, I started to go down the rabbit-hole of Google searches, trying to understand why I wasn't seeing any prepared statements showing up in the database. I turned on the MySQL general log to see if I could spot anything fishy:

Then, I started clicking through the application in order to populate the now-active general log. After a minute or two of this, I went back to the database to see what was showing up:

Which gave me this: 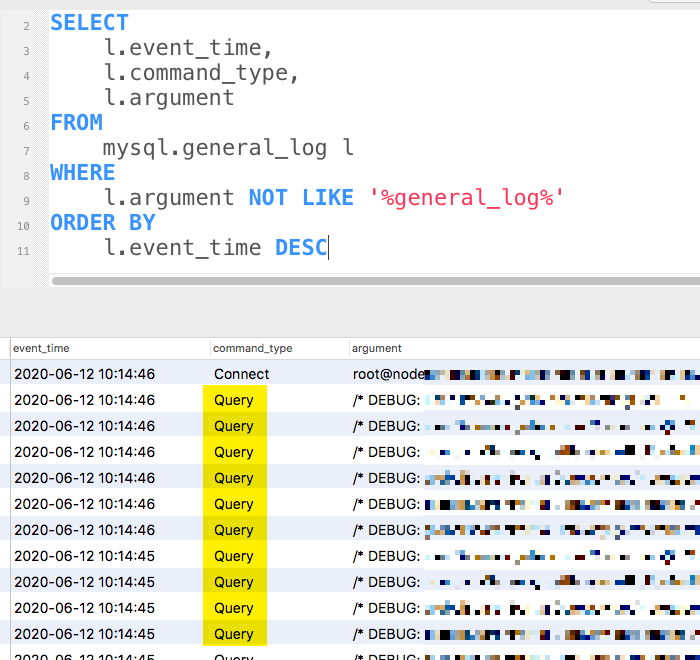 Notice that all of the command_type values are coming back as query. According to the MySQL 5.6 documentation on Prepared Statements, these should be showing up as Prepare and Execute commands, not Querycommands. Well, that is, if they were being run as prepared statements.

At this point, I started to look at how our MySQL JDBC driver was being configured. And, in the comments of the code, I saw this:

PUBLIC SERVICE ANNOUNCEMENT: If you put comments in your code, it can actually help the next person who reads it. Take this to heart, all ye who think that comments don't belong in code.

According to the linked resource, here's the configuration for "max performance":

As you can see, it has cachePrepStmts, which is documented as:

cachePrepStmts - Should the driver cache the parsing stage of PreparedStatements of client-side prepared statements ....

But, I'm seeing that it's not that simple.

As I was reading through the J-Connector documentation page, I came across this setting:

Notice that the "max performance" configuration omits the useServerPrepStmts setting, which means that it is defaulting to false, which means that my application isn't using any server-side prepared statements.

To test this new understanding, I created a stand-alone ColdFusion application with the following JDBC connection settings:

After running this page a few times, I went back to the general log:

Which gave me the following: 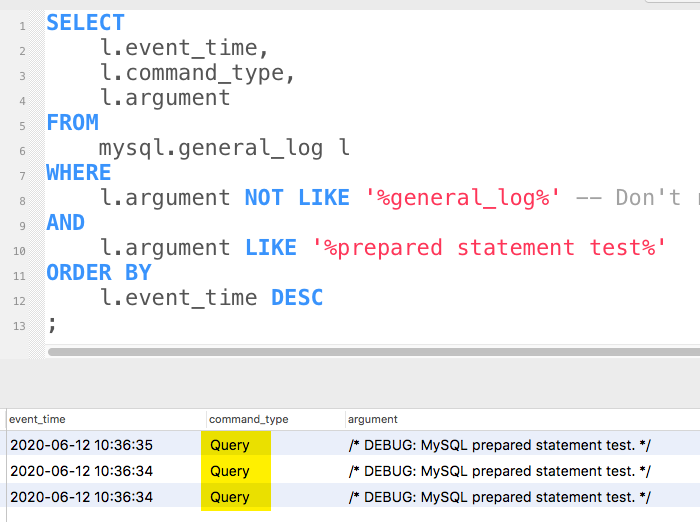 Even with the useServerPrepStmts connection setting enabled, this test query is still showing up as a Query command_type.

Eventually, Google brought me back to the MySQL Prepared Statement docs, which contained the phrase:

SQL syntax for prepared statements does not support multi-statements (that is, multiple statements within a single string separated by ; characters).

This makes sense. And, my test query was only running a single statement. However, I am often in the habit of ending my SQL statements with a semi-colon (;) in the same way that I often end my sentences with a period (.) in order to denote the "end" of the statement. To see if this "meaningless semi-colon" was causing an issue, I re-ran the test without the semi-colon:

After running this a few times, I went back to the general log and finally saw what I was expecting to see: 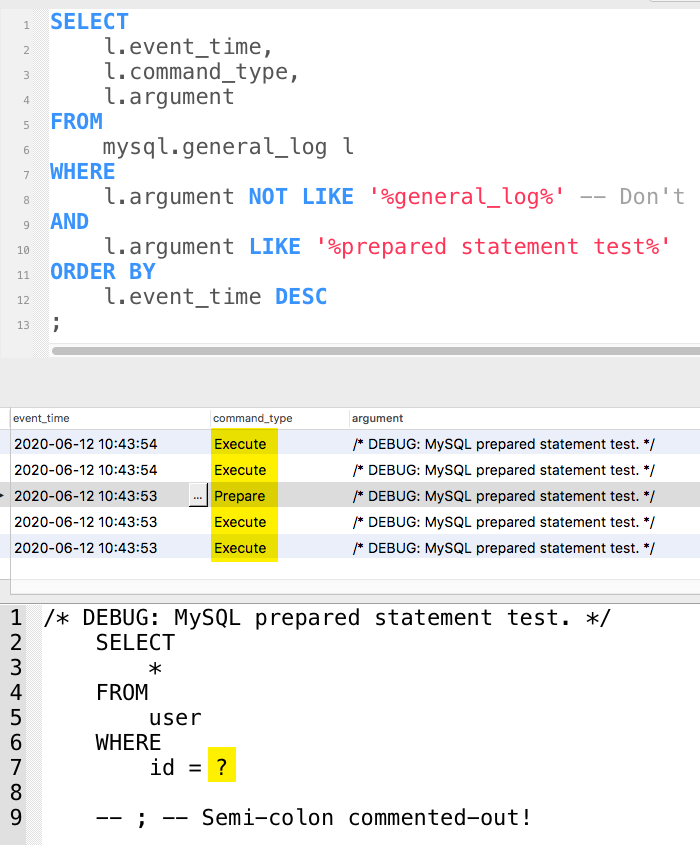 Finally! The query is now showing up as a prepared statement in the server. As you can see, there is a Prepare command_type followed by a series of Execute command_types.

Awesome; but, also, wat?! Are you telling me that by including a "meaningless" semi-colon at the end of my SQL queries, I may be accidentally and fundamentally changing the way the SQL query is managed and executed?! That seems completely bananas!

Very interesting! This could explain why the J-Connector docs don't include it as a default. Vlad goes on to describe how client-side prepared statements work (which is what I've apparently been using all these years):

When the statement is prepared on the client-side, the bind parameter tokens are replaced with actual parameter values prior to sending the statement to the database server. This way, the driver can use a single request to fetch the result set.

Very interesting! So, even with the CFQueryParam tags in place, the MySQL database is still receiving the "raw query" - the parameterization and substitution is only happening within the JDBC driver.

Continuing to try and understand how this all fits together, I read through the J-Connector docs and found this setting:

Oh chickens! Are you telling me that of the thousands of unique SQL queries that my application is running on a regular basis, any given connection in the database connection pool is only preparing and caching 25 of them? And the rest are what? Being re-parsed on every single execution?

There's a lot of food-for-thought here! This journey down the prepared-statement rabbit-hole has really shown me how little I've understood about what the database connection pool is doing, how prepared statements work, and who's actually doing the caching in these workflows. Here's what I'm taking away from this:

Of course, you should take all of this with grain-of-salt because, clearly, I've been very wrong about this stuff in the past - I'm not confident that I'm any less wrong at this point. But, at least I have a slightly better understanding of how prepared statements are parsed, cached, and executed in the MySQL JDBC driver in ColdFusion and Lucee CFML.

And, if you see me getting anything blatantly wrong here, please educate me! I want to understand this stuff better.

As part of this exploration, I turned on the general log, which logs every single query that gets executed. This can be no-so-great for performance. So, once I was done, I went back and turned off the general log:

I'm torn between "of course!" and NFW! Blimey, funny what a semi-colon can do, isn't it!

That's interesting about the configuration of the MySQL JDBC driver - where abouts would I start to configure the driver? Where do I put those options?

Right?! It's so strange. Especially when the very existence of a ; is actually preventing caching -- even if there is no content after the semi-colon. As far as where you can set these values, in our app we are setting them in the Application.cfc using this.datasources. But, I assume this can also be in the data-source settings within the ColdFusion administrator, probably in the Connection String box.

Excellent - thanks for the tip. Yeah, the semi-colon thing is definitely real - we got a 2s query down to 200ms, so that's a win, just by removing the semi-colon!

Damn. I went through my code & was hoping to find extraneous semicolons. No such luck! Just poorly written queries against a bad database design.