The other day, I had a typo in my ColdFusion code that was accidentally creating a circular reference in one of my data-structures. The workflow that was consuming this data-structure dealt with serialization; and, attempting to serialize the accidental circular reference was completely locking-up my Docker container. To debug this, I tried to use the dump() function with the top argument in an effort to see where in the structure the problem was residing - something that I demonstrated in Adobe ColdFusion 14-years ago. However, it turns out that the top argument won't actually protect you form a circular reference in Lucee. As such, I wanted to see if I could build a wrapper to the dump() built-in function (BIF) that would safely handle circular references in Lucee CFML 5.3.3.62.

To give you some more context, the problematic ColdFusion code looked like this:

As you can see, I had accidentally appended the variable values (with an s) when I had meant to append the variable, value (with no s). What this did was append the Array to itself over-and-over again, creating a bevy of circular references. And, when I then called serializeJson(), my Docker container would completely lock-up and I would have to force-quite out of Docker For Mac.

I knew something was wrong with the data-structure; but, I didn't know what it was. So, I attempted to use the top argument for dump() in an effort to incrementally output the values object, looking for suspicious data:

But, when I used dump(), my Docker container would lock-up; and, again, I'd have to quite out of my Docker For Mac.

This morning, I tried to replicate the same conditions in my CommandBox. And, at least CommandBox doesn't lock-up like my Docker container did. Instead, Lucee CFML gives me a reasonable error:

Here, we can see that Lucee is running into a StackOverflow error when trying to call .hashCode() on some value internally. Not knowing much about Java, my guess is that the .hashCode() of a ColdFusion Array (List) or a Struct (HashMap) is calculated by aggregating the .hashCode() calls of its member values. This would lead to infinite recursion given a circular reference.

To get around this problem, I wanted to create a wrapper to the dump() function that would handle circular references a bit more gracefully. And, I clearly had to do this in such a way that didn't require calling any .hashCode() methods.

Luckily, I discovered that the triple equals operator (===) in Lucee CFML will compare object references for complex objects. This gives us a way to see if two variables reference the same physical value.

To leverage this feature, I can keep an Array of complex objects. And then, given a value, I can brute-force loop over that Array and compare the given value to each existing value in the Array using ===.

ASIDE: I couldn't use array.contains( value ) as this function uses the .hashCode() under the hood (as I found out) and creates the same infinite recursion that we're trying to avoid.

Ultimately, my solution was to recursively traverse a given data-structure, creating a deep copy of it that would replace circular references with the string, [circular reference]. And then, pass this deep-copy off to the native dump() function so that Lucee could work its normal magic.

I called this function dumpSafely():

As you can see, the dumpSafely() function keeps a running aggregate of Arrays and Structs in the variable, complexObjects. Then, every time my deep-cloning algorithm runs into an Array or a Struct, it first checks to see if the value exists in the complexObjects collection. And, if it does, it replaces the reference with the string, [circular reference].

Once the deep-clone has been made, I just pass it off to dump(), along with any other arguments that were originally passed into the dumpSafely() function.

To see this in action, let's create a Struct with some wonky circular reference action:

As you can see, I'm creating a cornucopia of circular references. And, when we pass this data off to dumpSafely(), we get the following output: 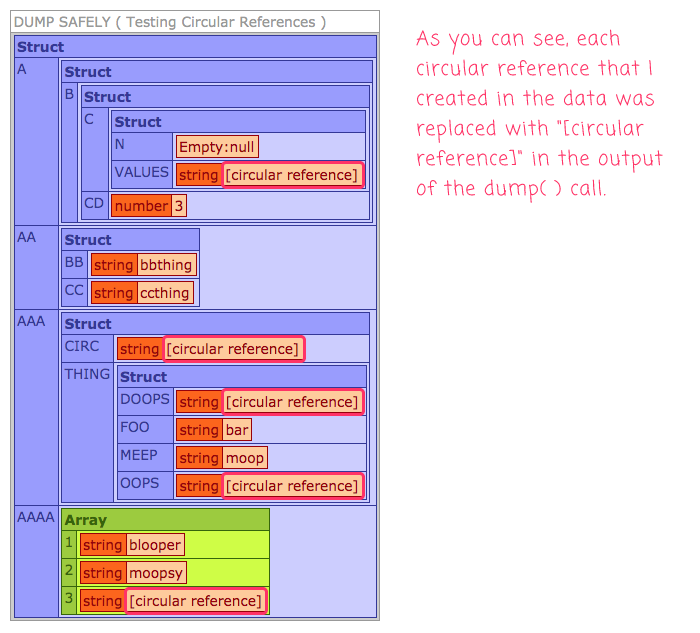 Each of the circular references that I created in my data-structure was gracefully replaced with, [circular reference], inside of my deep-copy. This allows the underlying call to dump() to execute without infinite recursion!

Obviously, my dumpSafely() wrapper is going to take a performance hit by both making a deep-copy of the given variable and then having to iterate over an internal array, checking every complex data-type; and, I'm going to lose the fidelity of some of the data-types (namely ColdFusion components which now get reported as Structs); but, seeing as this is a hail-Mary approach to debugging the circular references in my code, it seems reasonable enough to me in Lucee CFML 5.3.3.62.

Tweet This Fascinating post by @BenNadel - The "Top" Argument In Dump() Will Not Protect You From Circular References In Lucee CFML 5.3.3.62 https://www.bennadel.com/go/3763