In general, Lucee CFML has really solid JSON (JavaScript Object Notation) support because it stores data using native Types under the hood. Because of this, it never suffered from the random Type conversions that plagued Adobe ColdFusion developers when using serializeJson() (ex, converting "Yes" to "true", and things of that nature). Maintaining key-casing of Struct Keys, however, is not super straightforward. There are a number of Struct key-casing settings that you can define; and, they each have different scope and level of precedence. This is my attempt (through trial and error) to codify a mental model for these settings.

Notice that the quoted-key maintained its case and the unquoted key was implicitly converted to uppercase.

To get a more "natural" JSON serialization behavior in Lucee CFML - one that plays nicest with JavaScript and AJAX (Asynchronous JavaScript and JSON) - go into the Lucee Server Admin and, within the Language/Compiler section, set the Key Case setting to be Preserve case: 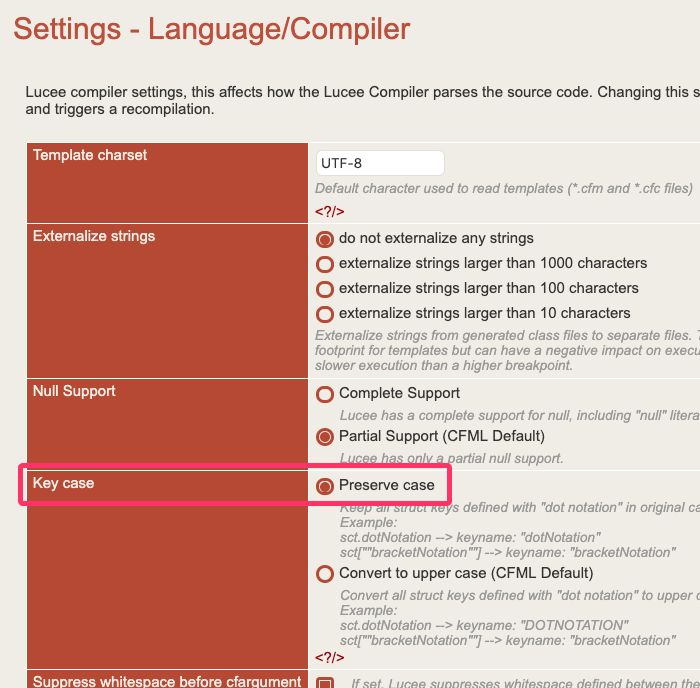 Ultimately, what this Lucee Server Admin setting does is update the lucee-server.xml configuration file. Specifically, it sets the compiler directive, dot-notation-upper-case to false:

With the dot-notation-upper-case set to false, if we re-run the Lucee CFML code from above, we get the following output:

This time, both the quoted and unquoted keys maintained the expected casing based on the notation as defined within the code itself.

At this point, you can be done. Your Lucee CFML code will behave the way you want it to when calling serializeJson(). However, this is not the extent of the settings for Struct-key management. So, let's take a quick look at the other options.

First, you can use JVM System Properties to define the dot-notation-upper-case compiler setting outlined above. If you define the System Property (or, supposedly ENV variable) lucee.preserve.case=true, then you will get the natural JSON handling. With CommandBox, I am using the jvm options in my server.json file to test this:

The next option is to use the CFProcessingDirective tag with the preserveCase attribute set to true.

With the processingDirective tag in place, running the above Lucee CFML code will give us the following output:

Again, we can see that both the quoted and unquoted keys maintained the expected casing based on the notation as defined within the code itself.

Unfortunately, the processingDirective tag is scoped to the CFML Template. Which means, using this directive in the Application.cfc, for example, will have no impact on your other CFM and CFC files. It literally has to be included in every template that defines a Struct-key.

NOTE: The key-casing seems to be applied at key definition time, not at serialization time. As such, collocating the processingDirective with the serializeJson() call will do nothing if the Struct-in-question was defined in a separate CFML template.

As such, if we run the following Lucee CFML code:

... we get the following output:

Notice that both Struct keys - quoted and unquoted - were converted to uppercase during the serializeJson() call. Setting this option to false overrides both the preserveCase attribute of the CFProcessingDirective tag as well as the Preserve Case setting within the Lucee Server Admin.

Ultimately, when it comes to Struct-keys and serializeJson() calls in Lucee ColdFusion, the best option is to just enable Preserve Case in the Lucee Server Admin. This will set the dot-notation-upper-case Compiler directive to false, which will allow all Struct-keys to adhere to the casing as it is defined within the code. This will make all of your serialized output more predictable, making Lucee CFML much more compatible with JavaScript-based clients that consume JSON via AJAX and embedded JSON payloads.

This is why I always write Structs with quoted keys and I always read from a Struct, in the same way, for consistency's sake:

I am also leaning towards writing to linked hash maps.
So instead of:

In this way, I can guarantee the key order, although, confusingly:

Does not honour this order, when displayed to the screen, which can be a source of much confusion.

So, regarding the struct-key ordering, one thing I saw when reading though the documentation is that you can pass a type to the structNew() method:

It looks like doing structNew( "linked" ) will create a Struct that maintains the key-ordering. I haven't tried it yet, though.

You can also use a "linked" syntax that looks like an array, [key:value]. Again, I haven't tried this yet. Perhaps this weekend.

Awesome news! Another useful addition to the CFML language...

You probably know this by now, but this will also create a struct that will maintain the order the key's are inserted in the struct

Oh heck yeah! I've been a big fan of ordered-structs since I realized that Lucee (and ACF) have this syntax. For the most part, in a production app it doesn't really matter what order keys are in. But, when doing demos with screen shots or outputting JSON, seeing the keys in a "human friendly" order is such a nice experience.