As I mentioned two weeks ago, I am currently in the process of migrating the explicit instrumentation of my ColdFusion JVMs using Datadog and DogStatsD over to the implicit Agent-based instrumentation of my JVMs using New Relic's Java Agent. The Java Agent covers a lot of ground right out of the box when it comes to Database transactions and overall request processing. But, it doesn't really know how to introspect the ColdFusion application internals. As such, the New Relic Agent still requires some explicit instrumentation on behalf of the developer. And, to do that, I've been cultivating a ColdFusion proxy component that makes interacting with the Java Agent a bit easier. 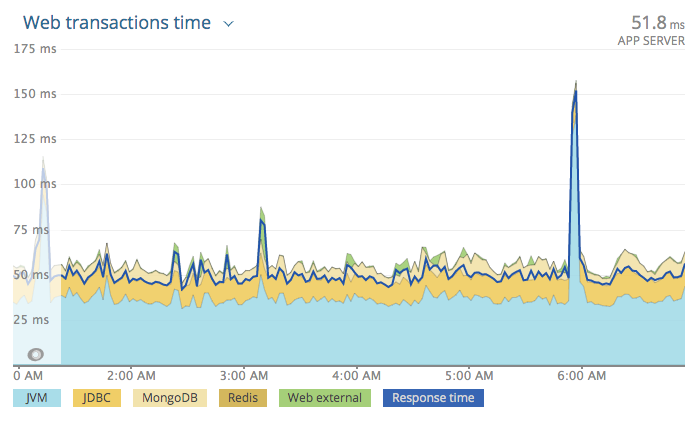 Ultimate credit for this ColdFusion component should go to Andrew Dixon who published his Lucee New Relic Component repo on GitHub 4-years ago. I basically just took his core concept and extended it to fit my own needs.

The first method that I created gave me the ability to name the Transactions running through my ColdFusion application:

Out of the box, it looked like New Relic was taking care of this automatically. It appeared to be taking the cgi.script_name and cgi.path_info values and using them to identify and group Transactions. However, upon further investigation, I noticed that a lot of requests weren't showing up at all in my Transaction list. New Relic was also grouping requests in a way that obfuscated some of the request distinction.

So, I decided to add code at the beginning of all of my request processing that explicitly names the Transaction. At work, we use Framework One (FW/1); so, our ColdFusion application is organized by "subsystems", "sections", and "items". I use these components, along with the HTTP Method to identify each request:

Using the fw.getSubsystemSectionAndItem() method, we end up producing Transactions with names like:

... which map directly back the code-organization of the ColdFusion application.

These both add a key-value pair to the Transaction, which can be queried later on in the NRQL (New Relic Query Language); but, the latter adds the value as a double whereas the former adds the value as a string. This is an important distinction because the NRQL engine won't cast "numeric strings" to numbers. As such, if you want to use aggregation in your NRQL, such as sum(*), you have to make sure the value being aggregated is stored as a number.

For example, when recording the payment processing Webhook in my ColdFusion application, I include the user ID as a string and the dollar amount as a number:

Then, with the dollar-amount as a number, I can aggregate it as a sum() in a NRQL query:

ASIDE: A cool feature of the New Relic transaction parameters is that they can be stored as structured objects. So, when I add a parameter called user.id, that stores it as an id property on a user object. This provides a nice way to group related parameters and avoid name-collisions across your ColdFusion application.

In addition to identifying Transactions and associating custom parameters, I also want to be able to time various portions of the ColdFusion application. For this, I created several Segment-related methods:

The timeSegment() method uses the startSegment() and endSegment() methods under the hood, wrapping them around the invocation of the given callback. It just makes the management of the Segment a bit easier:

This code executes the given callback synchronously and then adds a security.authenticate.getUser segment to the Trace details of the request.

Now, some requests are important from a ColdFusion application standpoint; but, are known to be really long running. Things like generating Zip files or running scheduled tasks take a long time and negatively impact some of the New Relic graphs and Apdex scores. As such, I added methods that allow me to side-step the instrumentation of long-running requests:

To be honest, there is probably a much better way to handle this. Telling the New Relic agent to ignore a request means that we no longer see it in the New Relic dashboard at all. This obviously has drawbacks when it comes to monitoring the application. But, it's the best way I have - so far - of curating dashboards that more directly reflect the user-facing experience.

And, of course, there's a method for monitoring errors:

I've only just begun to experiment with this method. The New Relic Java agent requires a "Throwable" object under the hood. And, I'm having trouble accessing the "Throwable" from a given ColdFusion error object. As such, I'm explicitly creating a java.lang.Throwable behind the scenes and then populating its Stacktrace using the TagContext property of the ColdFusion error. It's not a perfect mapping; but, it might be enough to facilitate debugging.

With that said, here's the code for my JavaAgentHelper ColdFusion component that proxies the underlying New Relic Java Agent. You'll notice that each method has an if statement internally that quietly becomes a no-op (No Operation) if thew New Relic Agent isn't installed in the current environment.

Explicitly instrumenting my ColdFusion / Lucee application with the New Relic Java agent is still an ongoing experiment (and learning experience) for me. As such, I am sure this component will be augmented over time. I'm still trying to figure out how to best express all of the application information and metrics in New Relic, whether it be as Transaction parameters or custom events (the latter of which I haven't even tried yet). That said, I hope this has been helpful to others that may be looking to add New Relic to their ColdFusion applications.

Tweet This Provocative thoughts by @BenNadel - Instrumenting ColdFusion And Lucee Code With New Relic's Java Agent Woot woot — you rock the party that rocks the body!

Ben, I have been wanting to look into this for so long! Thanks for doing it! We use New Relic for our Scala Play apps and I wanted to see how it would work with CF but haven't had the time.

My pleasure, good sir. I'm just starting to get more into the nitty-gritty of New Relic. We've had it for years, and I've literally only used it to look at the average response times (since we have historically done most of our metrics in Datadog). But, now that we're migrating from Datadog to New Relic across the whole org, I need to start to figure out how to use this beast.

It would probably be helpful if I actually linked to some of the Java Agent Docs :D

On a related note, I've recently started to track my feature flag state as custom parameters on my New Relic request transactions:

This allows me to pick apart my request performance on a granular level using the New Relic Insights NRQL (New Relic Query Language).