A couple of years ago, I looked at the Ng-Template construct in Angular 2 RC 1 and demonstrated that templates appear to maintain lexical binding even when passed out-of-scope. And, since that exploration, my mental model for TemplateRef's has been parallel to that of the JavaScript closure. However, the other day, Arul asked me how to access a top-level template variable from within a nested template. According to the rules of lexical binding, this should "just work". But, his question gave me pause; so, I decided to run a quick sanity check on nested template behaviors in Angular 7.2.13. And, from what I can see, nested templates maintain lexical binding perfectly well.

To test the scoping of template variables in a nested template context, I've created a silly little App component that iterates over a list of values. Each NgForOf iteration uses several TemplateRef's, including two nested templates and one sibling template:

There's no meaningful business logic here; so, please forgive the "foo", "bar", and "baz" values. The point here is only to see which templates have access to which values. Notice that the both the top-level and nested TemplateRef's are accessing "value". And, that the nested top-level template is also trying to access a sibling TemplateRef: 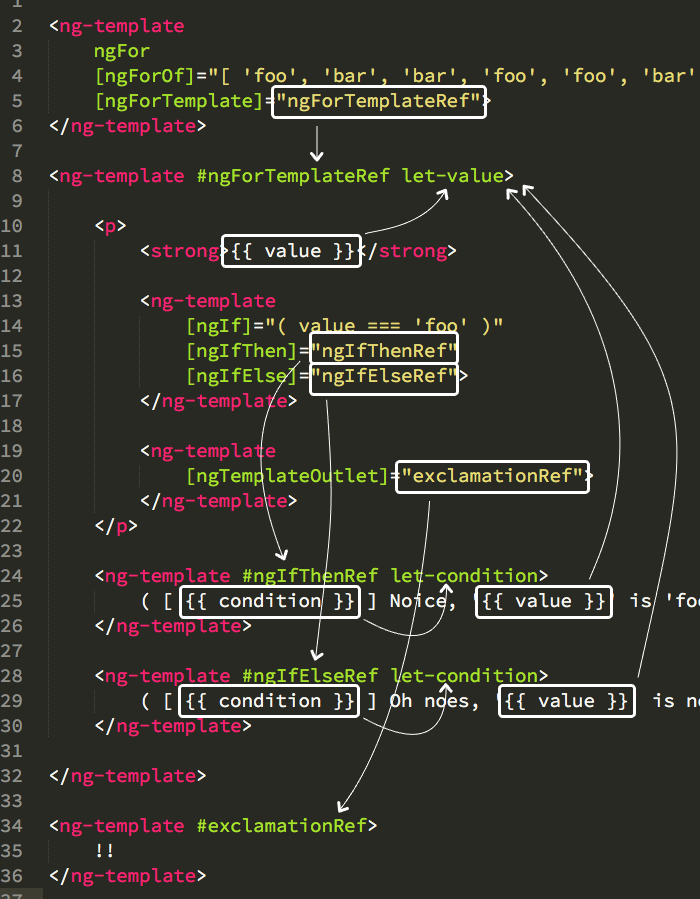 Again, there's no business logic here - only an exploration of bindings. And, when we run this Angular app in the browser, we get the following output: 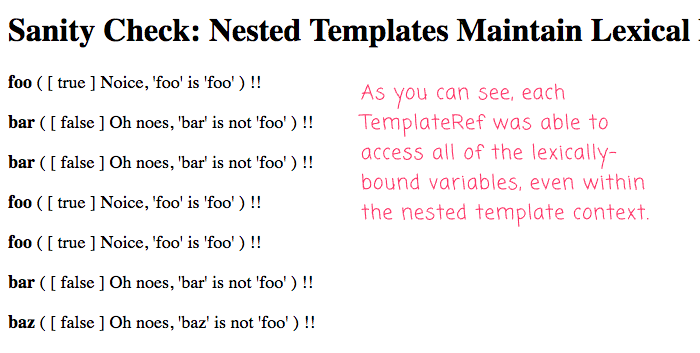 As you can see, the lexical binding of Ng-Template in Angular "just works". Or, at least, it works much like a JavaScript closure. The only other thing worth pointing out here is that accessing the "context" variables (ex, let-value, let-condition) has to happen on the TemplateRef itself, not on the context in which the TemplateRef is consumed.

Templates in Angular work like lexically-bound HTML fragments. This allows them to access variables declared in a parent scope as well as maintain bindings when passed out-of-scope (such as into another directive). Having nested templates does not change this behavior. Sanity check achieved!

?I used ng-template this evening with *ngIf, that evaluates to true. But the HTML content inside did not display. When I used the same *ngIf statement on a parent DIV conainer, the content displayed!

Does ng-template have some special requirement??

To be clear, I am not recommending that this be done -- I'm only exploring the behavior of ng-template and [ngTemplateOutlet].

Ah, good question. So the * is actually some "syntactic sugar". It allows structural directives to be applied without the use of ng-template. So, the following two are functionally equivalent:

The difference is that when you remove the *, you have to use underlying syntax, which breaks-apart the * expression and uses property bindings.

This is similar with *ngFor, but easier to see the big difference:

I try to break this syntax translation down in an earlier post, if it is helpful: www.bennadel.com/blog/3076-creating-an-index-loop-structural-directive-in-angular-2-beta-14.htm