A few weeks ago, I experimented with dynamic template rendering in Angular 2 RC 1. As of Angular 2 RC 2, dynamic template rendering is now part of the core platform functionality. But, the context input for the given template is provided as an object, not as a set of individual inputs (as I had in my experiment). This got me thinking about object literals and how they would affect input change detection. At first glance, it seems that Angular 2 is handling object literal inputs with a smarter approach than it did in Angular 1.x.

If you look at the code for the NgTemplateOutlet core directive, you will see that it destroys and re-renders the template if either the TemplateRef or the Context inputs change. This is really what got me thinking about literals. Specifically, I wanted to see if the given TemplateRef would be destroyed and recreated on every digest simply because I supplied the context as an inline object literal.

To test this, I created a small demo in which I am creating and consuming a TemplateRef in my root component. When consuming the TemplateRef, I'm passing-in the [ngOutletContext] property as an object literal. Then, I log the lifecycle of the template using an embedded directive, LogLifecycleDirective.

As you can see, I'm supplying the template context as the inline object literal:

The root component exposes three links - two of which change the inline object's value and one of which is unrelated. The unrelated link will still trigger change-detection in the root component which will help us see how the object literal dovetails with the change detection strategy and the digest lifecycle.

Embedded within the template, I'm using a simple directive that logs its own lifecycle so we can see when the TemplateRef is created and destroyed:

Bringing this all together, when we run the above code and click the three links in series - setting apples, setting bananas, and incrementing the counter - we get the following output: 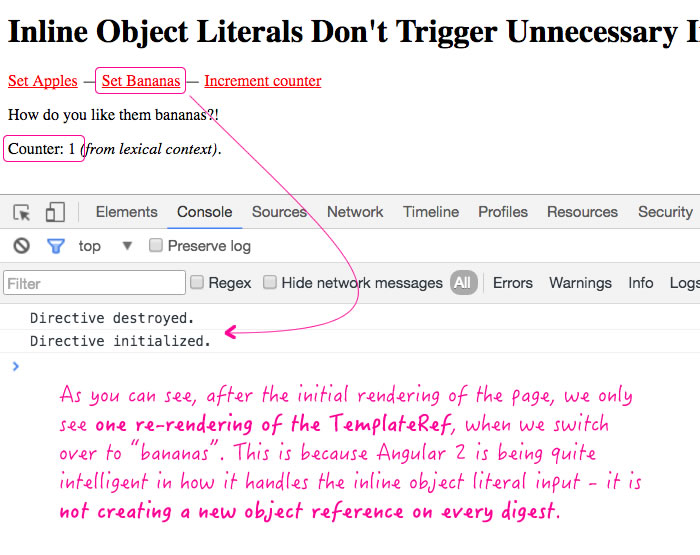 What we can conclude from this is that the use of an inline object literal doesn't create a new object reference in every digest cycle. And, in fact, if we add some breakpoints (which I do in the video), we can see that Angular is, indeed, looking at the dynamic portions of the object literal before it determines which object reference to use as the input. This is very good to know and makes the NgTemplateOutlet directive much more useful than I had at first believed it to be.