A couple of months ago, I looked at using recursive ng-template references in an Angular 6 app. And then, I followed that up with a look at recursive components. On its own, Recursion is plenty exciting. But, there's something particularly thrilling about rendering an application View recursively. In the comments for one of those posts, Munindar Reddy asked me for an example of using recursive rendering in conjunction with dynamic state. As such, I wanted to follow-up with one more exploration in Angular 7.2.13, this time using a "Folder" tree in which each folder can be expanded or collapsed by the user.

For this exploration, I'm creating a very simple data structure with Folders and Files. Both Folders and Files live within Folders, allowing the Folder structure to be deeply and arbitrarily nested below a root Folder. Here are the TypeScript interfaces for these two data types:

What you don't see defined in these Interfaces is any concept of the "expanded" or "collapsed" state of a Folder. For this particular exploration, I have chosen to store that information outside of the Folder tree. This approach is neither right nor wrong - it's simply a set of calculated trade-offs.

I wanted to keep the Folder tree as an immutable data-structure. And, by keeping the "expanded" state outside of the data-structure, I wouldn't have to jump through data-duplication hoops or deal with complex APIs like Immutable.js. Instead, I am just going to store the "expanded folder" state as a collection of Folder UIDs (universal IDs). This makes expanding and collapsing folders as easy as adding or removing UIDs from a simple, string Array.

But, this also means that as I recursively render the Folder tree component, I have to pass-down both the Folder structure and the collection of expanded folder UIDs. Luckily, with recursion, the code for this is only one-level deep - the "nested" portion is strictly a runtime concern. As such, this is much less complicated than it may sound.

As we pass the data down through the Recursive rendering, I want to keep the data immutable. This means that as a user toggles the expanded state of any given folder, I don't want to the contextual Folder component to mutate the collection of expanded Folder UIDs directly. Instead, I want the Folder component to emit a "toggle" event, which will bubble-up through the Recursive rendering until it is captured by the App component, which will, in turn, handle the mutation of the View-Model.

And, to add a little flair to this demo, I'm going to persist the collection of expanded Folder UIDs to the browser location. This way, if you refresh the browser - or pass the URL to another person - the Folder tree will re-render to the previously-expanded state.

NOTE: In order to keep the persistence simple, I'm skipping the Router and just using the Location service directly. This leads to code that is a bit janky; but, gets the job done.

When it comes to Recursion, you almost always want to separate the consumption of the recursive process from the implementation of the recursive call. This provides a layer of encapsulation that allows the recursive API to evolve independently of the calling context. In this exploration, we are upholding this practice by rendering a "FolderTree" component rather than attempting to render the root "Folder" directly. We then pass the root Folder and the collection of expanded UIDs to the FolderTree component without having to worry about how they are being consumed under the hood.

We also bind to the (toggleFolder) event on the FolderTree. This event is used to mutate the View-Model - expandedFolders - which is then passed back into the FolderTree using a unidirectional data-flow. This puts the AppComponent in complete control over how the data is maintained over time.

Now, let's look at the FolderTreeComponent - the start of our recursive view-rendering. This layer of encapsulation over the recursion is very thin. All it does it render the root Folder (the recursive component) and propagate toggle events:

As you can see, there's almost nothing going on here. In fact, it would have been trivial to remove this component altogether and just move the root folder rendering to the App component. But, again, I would recommend that you always create a layer of encapsulation around the recursive implementation. It will make the long-term maintenance easier.

With that said, let's get to the recursion! In order to make the FolderComponent a little easier to reason about, I've split the HTML template into its own file. This way, we can see that code behind the template is almost as simple as it is in the FolderTreeComponent:

As you can see the, Inputs and Outputs of the FolderComponent match the FolderTreeComponent. But, the FolderComponent also defines some local view-model state - isExpanded. This state determines, at least to some degree, whether or not this Folder attempts to render itself recursively. If the Folder is collapsed, then there's no reason to recursively render sub-folders.

The "isExpanded" state is calculated based on the Input bindings. Which is why, in part, we need to keep the "expandedFolders" collection immutable. If we attempted to mutate the expandedFolders collection directly, our ngOnChanges() life-cycle method wouldn't be invoked and we'd have to use the less-performant ngDoCheck() life-cycle method. As such, any request by the user to toggle the state of a Folder is emitted as a (toggleFolder) event, which is then handled by the App component, which, in turn, passes-down a new "expandedFolders" reference.

Now, let's look at the FolderComponent template. This is where the recursive magic happens:

As you can see, as part of the FolderComponent rendering, the FolderComponent iterates over its own sub-folders and then uses itself (<my-folder>) to recursively render each sub-folder. Notice also that any (toggleFolder) event that is emitted from the recursive call is then used to trigger a local (toggleFolder) event. Essentially, in a recursive component, each EventEmitter becomes a chain of EventEmitters that bubble events back-up to the calling context (the AppComponent).

Now, if we load this Angular application in the browser and toggle some of the folders, we get the following output: 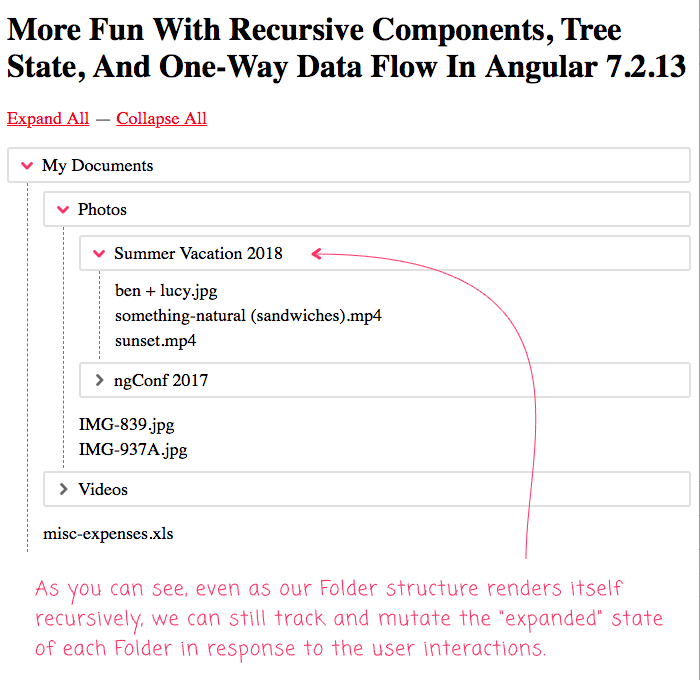 Isn't recursion just the bee's knees?! In this case, the recursion ends when a Folder either has no sub-folders; or, it is in a "collapsed" state and therefore does not render its own contents.

As I stated at the beginning of this exploration, my approach is just one of many valid approaches. The concept of the "isExpanded" state could have been baked easily into the actual Folder data-type. Or, it could have been baked into a derived data-type owned by the AppComponent. Each choice comes with different trade-offs. For my exploration, I opted to keep the data-structures immutable and track the expanded folders in a separate collection. Of course, the real goal of this post was to look at recursive component render in Angular 7.2.13; so, hopefully my choices don't distract too much from the primary focus.

I'm doing same thing for nested json with Expand/Collapse. toggleSection2() is function in which hide/show logic is working based on two classes. My code is much simpler. You can use ng-Container as below:

1.) selectedRuleList : is your json data
2.) item.SubRuleList : is my child record data
3.) replace hyperlink with a tag