One of the nice features of the Angular Router is that it can perform a "local" redirect at any level of the Route configuration. It can even chain local redirects together as it steps down through the configuration tree. A local redirect will even carry-forward the route segments that come after redirected segment. But, for design reasons that I don't fully understand, none of this works after you perform an "absolute" redirect. In other words, if your route configuration performs an absolute redirect, then no local redirects in the subsequent route will be honored. We can get around this limitation by performing the absolute redirect with a Component rather than a "redirectTo" property in Angular 7.2.13.

To understand the need to chain "absolute" and "local" redirects, imagine this scenario. Your application defines a feature that allows an administrator to manage a list of users. This feature is defined at the route:

Then, later on in the application development life-cycle, the powers-that-be decide to rename the feature from "User Management" to "People Management"; and, as such, change the route from "/users" to:

Of course, they don't want to break links that may have been bookmarked out in the wild; so, they define a redirect within the Angular Router configuration to forward the old "/users" route to the new "/people" route:

At this point, everything works exactly as you would hope.

Of course, all things change. And, eventually, the "people" feature gets re-engineered to use a list page. Unaware that there's a redirect from the old "/users" route to the "/people" route, the developers come in and add a local redirect in the "People Management" feature such that forwards the user from the feature-root to a "list" page:

From the feature's perspective, everything works perfectly well. But, unknowingly, these developers just broke the old redirect from the "/users" route. This is because the Angular Router won't follow the local "list" redirect after it has followed the absolute "/people" redirect. As such, any bookmarked links to the old "/users" feature will leave the Angular app in an incomplete state (possibly rendering a blank page or half-formed view).

To get around this limitation, we can use a transient Component - rather than the "redirectTo" property - to perform the redirect operation. Essentially, we're going to create an Angular Component that does nothing but invoke the Router.navigateByUrl() method. It turns out, if you use the Router to navigate to an absolute URL, any local redirects at the destination URL are honored and work as expected:

As you can see, all that this AbsoluteRedirectComponent does it look for the "data.redirectTo" property and then pass it to the Router.navigateByUrl() method. I'm doing this in the ngOnInit() method, rather than the constructor(), because it allows the previous navigation to finish before starting the new navigation (to the data.redirectTo URL). This feels more in alignment with the in-built "redirectTo" property, which doesn't emit a "cancel" event.

It should be noted that using the Router.navigateByUrl() method will "break" the Back Button. Unlike the in-built "redirectTo" property, which doesn't push the intermediary location onto the History, the AbsoluteRedirectComponent will allow its own route to be pushed onto the History before forwarding the user. This makes it difficult for the user to use the browser's back button to navigate to the pre-redirect Location. Because of this, you might want to considering using this approach only for application ingress routes.

To this strategy in action, let's define an Angular Router configuration with our "people" and "users" routes as well as a fun little route that bounces the user to various absolute locations before finally taking them to the "people" route:

And, if we load this Angular app in the browser and attempt to navigate to "/ping", we get the following output: 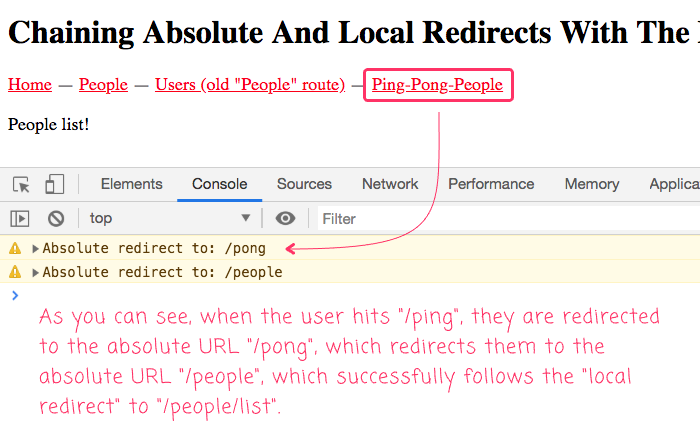 As you can see, even through we chained several absolute URL redirects together, we were still able to follow the local redirection from "people" to "people/list".

Once you are in an Angular application, local redirects work in the vast majority of Router use-cases. But sometimes, such as when trying to honor old URLs, it's necessary to chain a local redirect after an absolute redirect. Out of the box, the Angular Router doesn't allow this. But, as you can see in my demo, we can side-step this limitation by performing the redirect with a transient component rather than the Router configuration in Angular 7.2.13.

Tweet This Deep thoughts by @BenNadel - Chaining Absolute And Local Redirects With The Router In Angular 7.2.13 https://www.bennadel.com/go/3600

It just occurred to me that I might be able to use a "replace state" navigation extra to get around the "Back Button" issue. I will follow-up on that after work.

I was correct. You can use the replaceUrl Navigation Extras option in order to get around the broken Back Button behavior. Or, in other words, you can use replaceUrl to create a more natural and intuitive back button experience:

... in this follow-up post, I am updating the .navigateByUrl() call as such:

I believe that this update makes a much more viable solution.