Yesterday, I demonstrated that wildcard routes (**) can be scoped to a route sub-tree in Angular 5.1.3. I described this behavior as good for "modularity" in that it made it possible for a feature module to handle invalid URLs within its own local logic. But, the "redirectTo" route configuration that I used in the demo was anything but "modular" - it redirected to an absolute path in the application. As a quick follow-up post, I wanted to demonstrate that a wildcard route can redirect to a URL that is relative to its place in the UrlTree. This allows feature modules to contain truly modular route definitions in Angular 5.1.3.

In yesterday's post, I had a "**" catch-all segment that used an absolute URL redirect:

This worked; but, of course, coupled my local URL logic to the fact that the entire application was below some "/app" prefix. To decouple the local portion of the URL tree from the app prefix, we can change the "redirectTo" value to use a location-relative path:

To see this in action, I've modified the router configuration in yesterday's demo to use a relative path in the "**" catch-all route. Nothing else has changed:

As you can see, the catch-all route (**) is redirecting the user to the "" segment. Which will leave them in the root of the "/app/a" UrlTree. And, if we run this in the browser and try to navigate to the invalid route within the "/app/a" sub-tree, we get the following output: 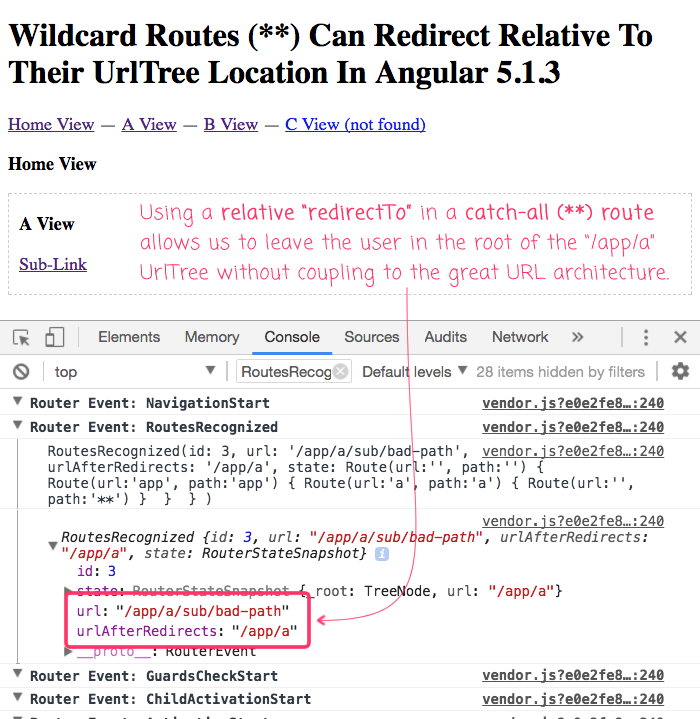 As you can see, the use of the relative (redirectTo: "") left the user in the local root of the "/app/a" sub-tree. We were able to handle the feature module redirect logic without coupling the feature module to the overall URL architecture of the application.

I should have mentioned this yesterday. But, to be honest, I didn't even think that this would work. I only thought to test it after I had already posted yesterday's demo. And, when I tried it this morning, I was surprised and delighted that it worked.

Tweet This Interesting post by @BenNadel - Wildcard Routes (**) Can Redirect Relative To Their UrlTree Location In Angular 5.1.3 Woot woot — you rock the party that rocks the body!

have visited your page a couple times now - very helpful! I find Google's own documentation --extremely-- tiresome, cumbersome and failing in so many other ways (especially when it's 5am and I am short in patience, as it is right now^^)

How often do you go to programming/tech events? Seems you hang out daily :D

Thanks for the kind words! It is much appreciated. I know what you mean about the Angular docs. There are a lot of them; it can be hard to find the one specific feature details that are you are looking for. I'm glad that we community members can help fill in some of the little gaps :D

I've been trying to go to more events lately, specifically Meet Ups. Actually, not for the past month or two; but, I'm hoping to get back into it again.