In the past, I've looked at the APP_INITIALIZER as a means to re-create the "run blocks" that we knew in AngularJS. I soon discovered, however, that the NgModule constructors could provide an even more straight-forward "run block". But, in both cases, I was only using the "run block" to manipulate services that had already been instantiated. The thing that's so fascinating about Dave's post is that he's using the APP_INITIALIZER to actually load remote configuration data from the server using an AJAX request.

It's in this "block and defer" period that we can use Angular's HttpClient to make an AJAX (Asynchronous JavaScript and JSON) request to the server. Using the AJAX request we can load configuration data that can be used to customize our application for a specific environment. For example, we probably want to use different API keys in Production and in Development. Take, as a thought experiment, a simple Geolocation Service that leverages the IPInfo.io API:

Each of these API calls needs to include an API Token. And, that API Token is tied to a particular rate-limit. As such, we probably want to use a "paid" API Token with a high rate-limit in production. But, in the local development environment(s), we can use a "free" API Token that has a smaller rate-limit.

In order to keep the application portable, we don't want to compile the API Token into the Angular code. Instead, we want to pull the API Token from an external source. For the sake of this demo, I'm going to use a simple app.config.json text file:

The question then becomes, how do we grab that API Token; and, do it in such a way that makes it available for ************ dependency injection. After all, if we look at our GeocodeService class, it doesn't know anything about APP_INITIALIZER. It just requires the API Token as part of its constructor. That's the beauty of dependency-injection (DI) - it inverts the relationships. The GeocodeService doesn't have to care about where the configuration data is coming from - it leaves that decision making up to the DI container.

Now, one thing that is awesome about Angular's dependency-injection algorithm is that services aren't created until they are actually required by the application. So, if you have a Service that is used by a single component; and that component is never mounted; then, Angular will never instantiate that Service.

This "lazy evaluation" is going to be a key ingredient in our remote configuration integration. It means that we don't actually have to configure all of the application Services at the same time. Instead, we can use Factory functions to defer configuration until just before a given Service is instantiated.

So, we can use the APP_INITIALIZER to load the remote data. Then, once the remote data is loaded - and the application bootstrapping is allowed to complete - we can consume the configuration data within subsequent Factory functions in order to configure the dependency-injection tokens for our configurable services (like the GeocodeService).

To see this in action, I've created an AppInitializer Service that both loads the remote data and acts as a conduit for the subsequent Factory functions:

As you can see, the AppInitializer loads the remote configuration data and then stores it as a public property. Then, the AppInitializer is required as a dependency for our IP_INFO_API_KEY factory function. It is inside this factory function that we then translate the remote configuration data into a local dependency-injection Provider for our GeocodeService.

This works because nothing in the application is attempting to eagerly consume the GeocodeService. As such, it won't get instantiated until after the APP_INITIALIZER runs and the IP_INFO_API_KEY has been configured.

Once we have our AppInitializer, we just need to pull the Providers into our application module:

Now, if we run this Angular application, we can see that the remote configuration data is successfully loaded, allowing the application to be bootstrapped: 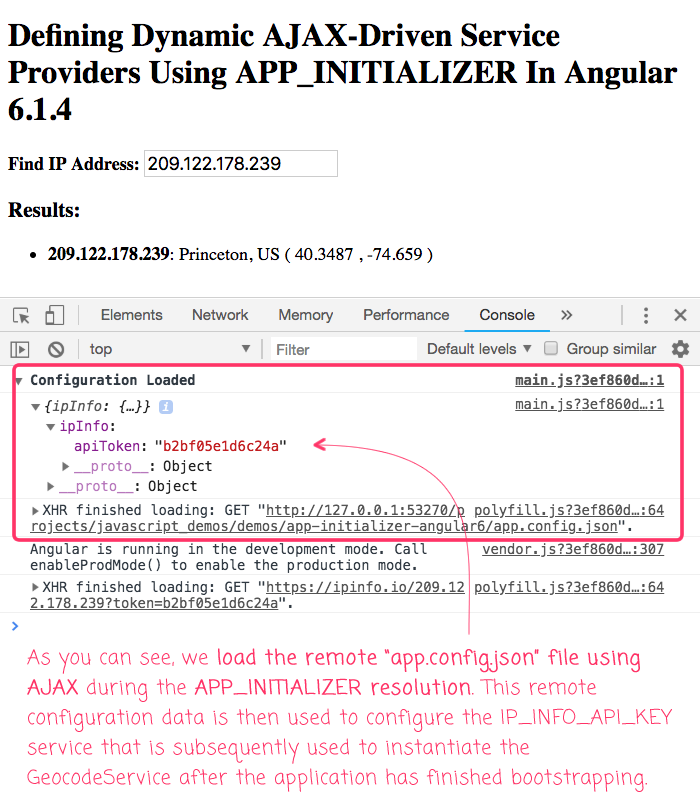 As you can see, this worked quite nicely! And, the beautiful part of this is that the GeocodeService remains blissfully unaware of where any of its configuration data came from. That's the miracle of dependency-injection (DI) and inversion of control (IoC). And, part of makes Angular such a powerful framework.

As a quick follow-up to this post, here's another approach to configuring an Angular application using an embedded JSON payload:

This linked approach requires some server-side processing so that it can serialize and embed page-specific configuration data in the page that is serving up the Single-Page Application (SPA). That said, if you are already in that kind of a context, embedded the configuration data can make life a bit more simple.

I see the use of APP_INITIALIZER being recommended for runtime config of an Angular app, almost exclusively. Unfortunately it runs into a brick wall quick when the project uses NGRX as the effects are merged prior to the APP_INITIALIZER (https://github.com/ngrx/platform/issues/931). Have you run into this problem? If so, what methods have you used to get around the issue and still have runtime config?

Sorry, I am not sure. I haven't really used NgRX much (I'm still very much a noob when it comes to externalized state management). I also haven't created too many applications where I have complex configuration requirements. So, much of this is trial-and-error as I come up against issues.