In Angular 1.x, we had a "configuration phase" during the application bootstrapping. This was the part of the bootstrapping process in which we could inject configuration data into service providers before the associated services were instantiated. For example, we could inject HTTP Interceptors into the Http Provider. Later came the concept of "decorators" in which we could alter the behavior of a service by monkey-patching its implementation during bootstrapping. In Angular 2, neither of these concepts exist. The configuration phase in Angular 2.x has to be re-imagined using dependency-injection.

In Angular 2.x, this "composite dependency" roadblock has been removed by the concept of "multi" providers. A "multi" provider is a single dependency that aggregates a collection of values that have been supplied by different modules within the Angular 2 application. 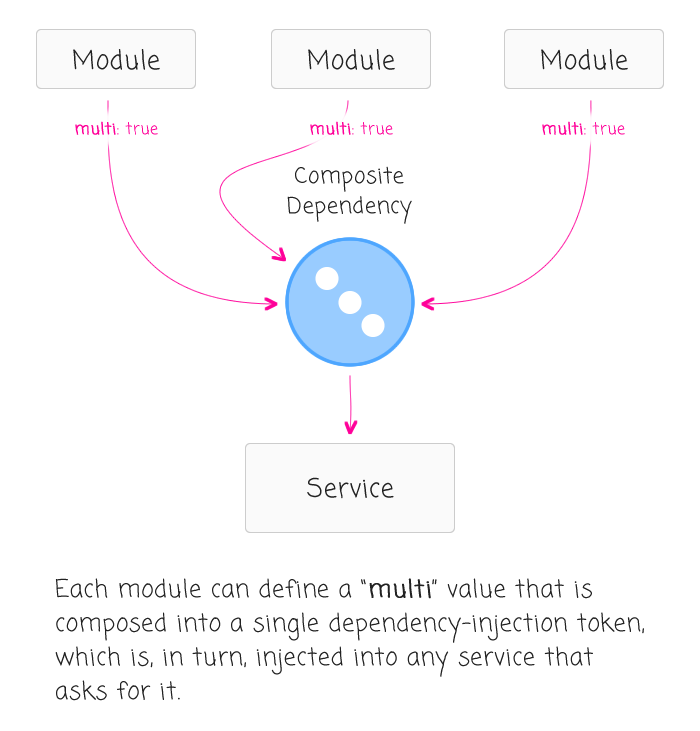 To leverage the multi provider, you have to invert your mental model. Instead of thinking about explicitly "supplying values" during configuration, you have to start thinking about "receiving values." If you have a service that needs to be instantiated with a Collection, design it to receive that collection in the same way you would outside the context of Angular. Then, configure your dependency-injection to aggregate that collection across the application providers.

As you can see, the Greeter constructor is designed to receive a collection of Transformers that implement the IGreetTransformer interface:

Of course, we have additional meta-data for the dependency-injection (DI) because this is an Angular 2 application. In this case, we're telling the Angular 2 Injector that this transformers collection will be supplied by the DI token, GREETER_TRANSFORMERS:

This GREETER_TRANSFORMERS value is the collection that we'll be aggregating across the application. This is the value that would have been populated, so to speak, during the configuration phase in Angular 1.x. In Angular 2, however, we can design this Greeter class to be simple and naive to the configuration process.

In this exploration, I want the Greeter service to come pre-baked with a core Transformer. But, I don't want to hard-code that relationship within the Greeter itself because I want to keep the Greeter nice and flexible and open to change. As such, I'm going to wrap the Greeter up in its own Angular Module (NgModule) where I can initialize the GREETER_TRANSFORMERS "multi" dependency with the core Transformer:

Here, the Greeter Module is defining its own set of exposed Providers that includes the initialization of the GREETER_TRANSFORMERS DI token with the CoreGreetTransformer transformer. Since this is a "multi" token, it means that our application can also add to it. And, in fact, in our root Module, we're going to configure the GREETER_TRANSFORMERS DI token with two additional transformers:

NOTE: I've supplied a commented-out Factory function approach to see how something similar could be implemented more explicitly.

As you can see, in addition to the CoreGreetTransformer provided by the Greeter Module itself, the App Module is supplying two additional transformers: the YellingTransformer and the ComplimentTransformer implementations. Now, when the Angular 2.x application is bootstrapped, our Greeter service will "receive" a constructor argument that composes all three of these transformers.

Within our root component, we can inject the Greeter service and try to generate a greeting:

And when we run this Angular application, we get the following output: 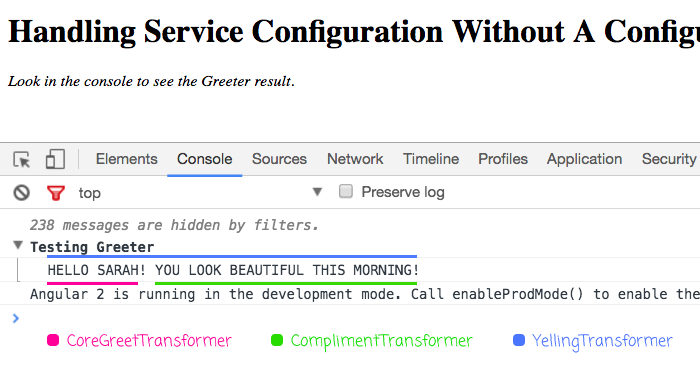 As you can see, the Greeter service successfully applied all three transformers, doing so in the order in which they were defined. First, it applied the CoreGreetTransformer implementation, supplied by the Greeter Module:

Then, it applied the ComplimentTransformer and the YellingTransformer implementations in the same order in which they were defined in the App Module:

In Angular 2.x, we sill have all the configuration potentiality that we had in Angular 1.x. But, now that we can aggregate a "multi" dependency across the various modules of an Angular 2 application, we no longer need an explicit "configuration phase". This actually forces us to create cleaner service boundaries by requiring that the configuration be dictated by dependency-injection. Meta-data aside, this allows us to design services as we would outside of an Angular 2 context, which helps us think more clearly about object design.

As a final side-note, if you need to configure a service after bootstrapping, such as turning runtime-flags on or off, you can still do this in an application "run block", similar to what we had in Angular 1.x.

Tweet This Titillating read by @BenNadel - Handling Service Configuration Without A Configuration Phase In Angular 2.1.1 https://www.bennadel.com/go/3174

Hi, very nice blog.
Thanks for all the help you gave me with it.

I looked at this example, and i'm trying to make something like this

I have a form, for activities for example, and each activity has a type, and each type could have more controls in the form.

My idea is to register one component for each type, and then select based on the type, and plug it on the form.

I wanted to do a quick follow-up post about how "run blocks" could be used to perform post-instantiation configuration:

In this way, the configuration for a single service can be done with both dependency-injection and run-time (so to speak) modification.

I'm not too familiar with the form stuff; but, from what I have seen none of the form stuff really involves bootstrap configuration. It all seems to be done in the Components that render the form. But, maybe I am not understanding what you are asking.

I read back my comment and it's not as clear as I expected.

What I'm making is this.

Ultimately, components need to be "matched" in a template using some sort of a selector. So, regardless of what interface a component implements, it still has to be:

1. Defined as a "declaration" in the root NgModule or one of the module that it imports.

2. Match some element-selector (or attribute selector) in one of the rendered templates.

Now, if you are saying that you have multiple components with the *same selector* and you are trying to have only one of them matching in a template, I am not sure that this is possible. All matching components will be associated with the given element. If you find this happening, you may have to create additional NgModule's that isolate the scope of a particular component (applying it only to templates within that NgModule).

Speaking of NgModule, I just realized (was told) that the NgModule constructor provides an implicit "run block" for each module:

In retrospect, it makes perfect sense; but, it had not occurred to me that it would work this way.