Last night, Ward Bell said something to me that sort of blew my mind. In retrospect, what he said is totally obvious; but, it was something that I had never considered before. He mentioned that "configuration" can be performed in the NgModule constructor. To date, I've never really considered the NgModule class itself; I mostly viewed it as a hook on which to hang the @NgModule() meta-data. But, now that I think about it, the NgModule constructor provides an implicit module-level "run block" in your Angular 2 application.

Recently, I've been thinking a lot about configuration in an Angular 2 application. Between dependency-injection and run blocks, we have a lot of options. And, with the NgModule constructor, it seems like we have one more. To explore this new avenue of configuration, I wanted to put together a simple demo that simply logs messages to the console so that we can see the order-of-operations during the bootstrapping process.

First, I'm creating a non-root module - OtherModule - that provides a service - OtherService. This module will ultimately be imported into the root module; but, I wanted to see how each NgModule instance would operate on its own. So, I gave the OtherModule a constructor and tried to dependency-inject its service:

As you can see, I'm just injecting the OtherService into the OtherModule constructor and then logging it to the console.

Now, in the root module - AppModule - I'm doing the same thing. I'm providing a service - AppService - and injecting it into the AppModule constructor. Only this time, I'm also injecting the OtherService imported from the OtherModule:

As you can see, in the AppModule, I'm injecting both the AppService and the OtherService into the AppModule constructor. I'm also providing a traditional "run block" using the APP_INITIALIZER token.

Finally, in our root component, I'm just logging the constructor. This should be the very last thing that runs in the entire application:

Now, when we run this Angular 2 application, we get the following page output: 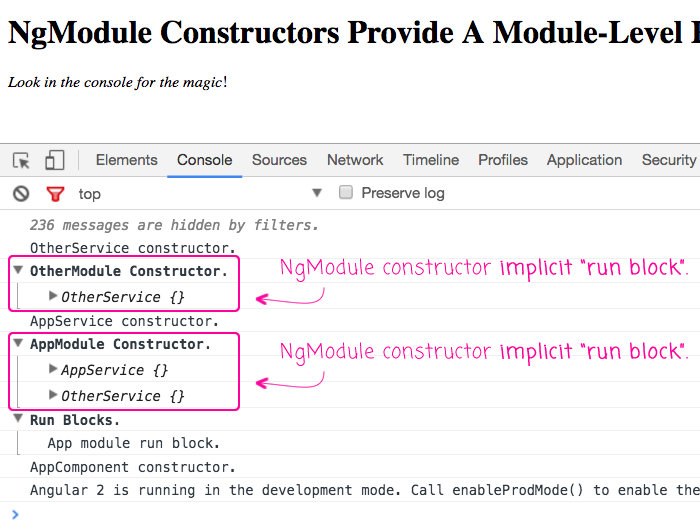 This is really cool. Like I said above, in retrospect, this is kind of obvious. But, until last night, I had only ever considered NgModule in terms of meta-data, not in terms of "execution". After the meta-data is consumed, however, each NgModule class is instantiated with a constructor that can leverage Angular's dependency-injection (DI) mechanics. As such, these module constructors provide implicit run block functionality.

Have you considered writing about the "forRoot" convention, where the root module grabs the providers from child-modules, and integrating that into the article?

To be honest, I don't have a great understanding of the .forRoot() convention. I know that I've used it for the Router (I think) and for something else (I can't remember); but I don't have a great mental model for how modules really fit together just yet, especially since all of my sample / test code basically only has one Module.

I've been diving into Node.js a bunch lately (for work); so, I'll hope to swing back into Angular again shortly.