In the LaunchDarkly Lunch-n-Learn panel discussion in NYC, I had theorized that you could use LaunchDarkly as a way to "hack together" light-weight administrative features for your web application. Since the LaunchDarkly multivariate feature flag values are so open-ended, I suggested that you could provide JSON (JavaScript Object Notation) payloads to your application which could then act somewhat like a light-weight database table. What I didn't realize until I went to play with this idea (after the lunch-n-learn) was that LaunchDarkly actually has native support for JSON. Meaning, instead of shoe-horning the concept of JSON into a "String type", LaunchDarkly actually supports a "JSON type" right out of the box. This allows you to pass full Object and Array data structures to your application via the LaunchDarkly dashboard and client. These Object and Array data structures can then be used to implement light-weight administrative and operational functionality in your web application.

As a thought experiment, imagine that you wanted to start black-listing certain IP-addresses in your application (or, white-listing IP-addresses in a "fail closed" kind of scenario). To do this, you'd have to:

None of this is particularly complicated. But, it's tedious, it requires human effort allocation, and it probably won't do much to further the feature-set of your core product. In other words, you're not in the business of blocking IP-addresses; so, having to build infrastructure to support IP-address blocking is likely a distraction from your company's goals and mission statement.

Now, if you squint a little bit, the LaunchDarkly dashboard and client can provide all of that functionality with next-to-no effort. If you're a LaunchDarkly customer, you already have a means to securely define and modify data (the dashboard). And, you already have a way to consume said data in your application (the client). All you need is a sufficiently flexible data-structure with which to implement your "database tables" - and that's where the "JSON Type" comes into play.

To demonstrate, let's create a feature flag in our LaunchDarkly dashboard that will provide an Array of IP-addresses that we'd like to block in our web application. I'm going to call this feature flag, "operations-ip-blacklist". Since we're going to be using the JSON Type, we need to create a multivariate feature-flag. This is actually nice because it means that we can have a history of IP-address configurations rather than always changing the same value.

NOTE: In general, I prefix long-term operational feature flags with "OPERATIONS-". This way, it is exceedingly clear that this is not a roll-out feature flag; but, rather, one geared towards the health and stability of the underlying system.

Here's what the variations for this feature flag look like: Notice that the variation values are being provided as Array structures - not JSON strings. This is really great because you don't have to deal with complicated character escaping when defining the structures - you just define them as you would in the code. Then, LaunchDarkly takes care of serializing them, streaming them to the client (via server-sent events), and deserializing (and presumably caching) them in your application memory space.

And now that we have our "operations-ip-blacklist" LaunchDarkly feature flag, let's create a simple Node.js script that performs some mock HTTP requests with a given IP-address:

In this code, I'm just calling my mock HTTP request handler every second. And, in the mock HTTP handler, I'm grabbing the "operations-ip-blacklist" feature flag. The Promise returned by the .variation() method resolves to an Array structure that contains the values from our LaunchDarkly dashboard. There's no parsing or deserialization needed - it's all handled implicitly by the LaunchDarkly client. All we have to do is grab the array of blacklisted IP-addresses and see if the incoming IP-address is in the list.

Now, if we kick off the Node.js test script, then go into the LaunchDarkly dashboard and switch to a variation that contains the mock IP-address, we get the following output: 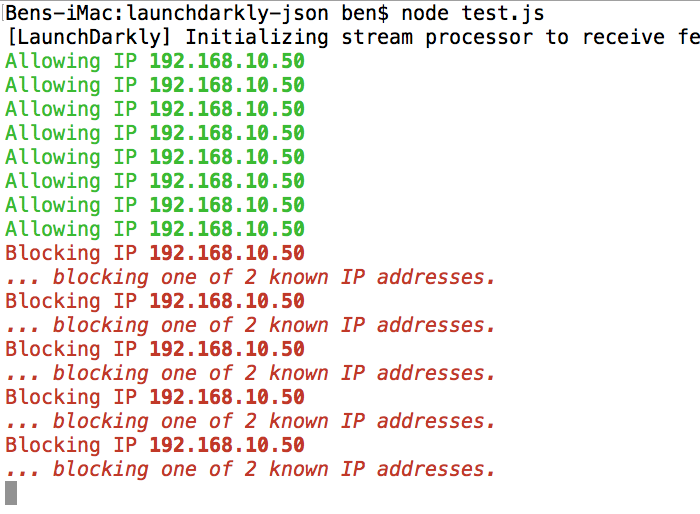 As you can see, the moment we switched Array structure variations in the LaunchDarkly dashboard, the change was streamed to the Node.js client where it immediately started blocking the mock incoming HTTP requests (you can see this very clearly in the video).

The mechanics of this exploration aren't really any different from the mechanics of my previous LaunchDarkly explorations: set a flag, stream the value, apply the value to the application control flow. The aspect of this exploration that makes it so different is the use of the complex Array structure as a "Type" of feature flag. The ability to use Arrays and Objects brings a degree of flexibility and sophistication that you can't get with simple Booleans, Strings, and Numbers. Complex data structures really allow you to implement light-weight data-intensive features in your application with almost no effort. In this case, we've managed to build an IP-blacklisting feature with what amounts to one or two lines of the code - the rest of the functionality is all provided by the LaunchDarkly infrastructure.

Now, I'm not suggesting that you replace all of your administrative features with LaunchDarkly feature flags. But, I am suggesting that the JSON Type affords a high degree of power. And, depending on what you want to be prioritizing in your business, the JSON Type can stand-in as a means to power light-weight but data-intensive administrative features with almost no effort at all.