Yesterday, in my review of Distributed Systems Observability by Cindy Sridharan, I mentioned that I've never gotten a lot of value out of pre-production load-testing. Instead, I use LaunchDarkly feature flags to incrementally roll-out a new feature while monitoring the underlying database and application performance. Essentially, I use production users to safely perform load testing in the most "production like" environment (aka Production). A few days ago, I was discussing this with fellow InVision'eer, Gabriel Zeck, when it occurred to us that we could use the very same approach to gradually ramp-up database migration tasks that operate on batched records. Meaning, we could use LaunchDarkly's multivariate (multi-value) feature flags to gradually increase the batch size of each subsequent database operation while closely monitoring the database performance.

When LaunchDarkly first launched, it only allowed for Boolean flags. Meaning, each feature flag was either True or False. With the introduction of multivariate feature flags, however, multiple datatypes became possible. And, with datatypes like Number and String, arbitrary values also became possible.

To explore this idea in the context of batched operations like database migrations, I went into LaunchDarkly and created a multivariate feature flag for "batch size": 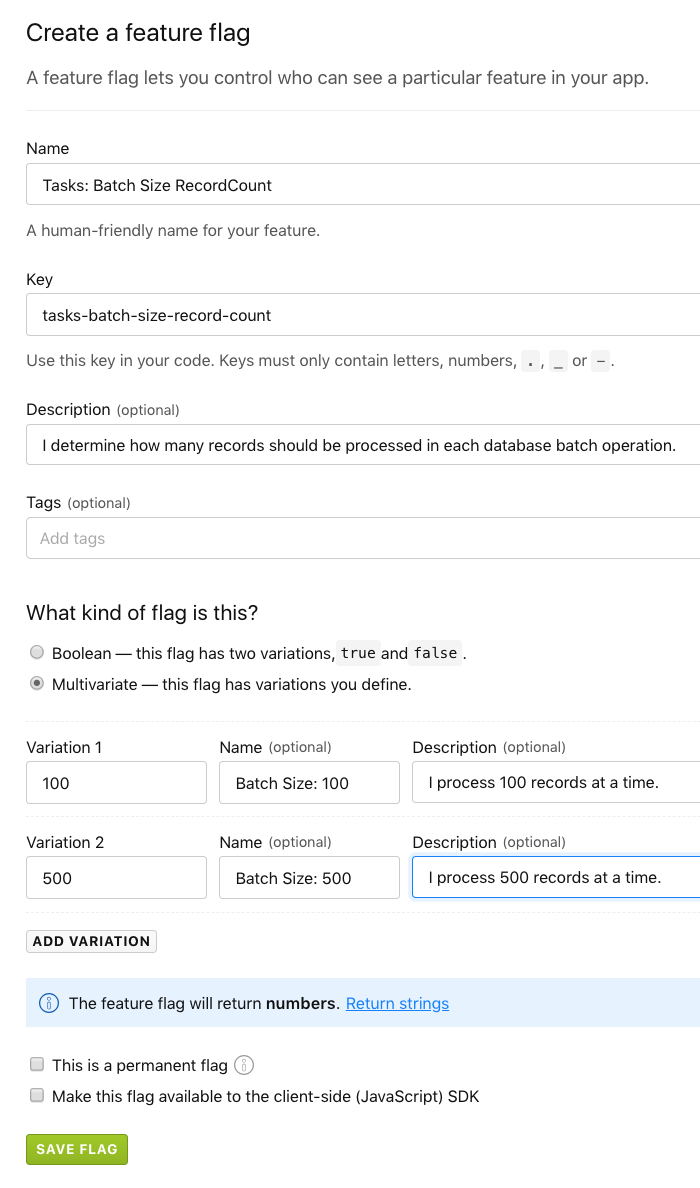 As you can see, this multivariate feature flag - tasks-batch-size-record-count - has two variations: 100 and 500. These values will then be used to drive the iteration size in a mock database migration in Node.js. In the following code, notice that I'm calling the this._getBatchSize() method for each chunk of records that I pull back from the "database":

As you can see, for each pass of the while(true) loop, I'm checking the LaunchDarkly client for the "tasks-batch-size-record-count" feature flag, which I'm then using to drive the number of records that I read from and then write to the database (all mocked-out). When I do this, I am uniquely identifying this particular task runner as, "task-runner-node-demo". This unique key allows me to use the same feature flag across different task runners while still allocating a different batch-size to each task identifier.

Once I have this identifier in place, I can go into the LaunchDarkly dashboard and target it in my feature flag rules: 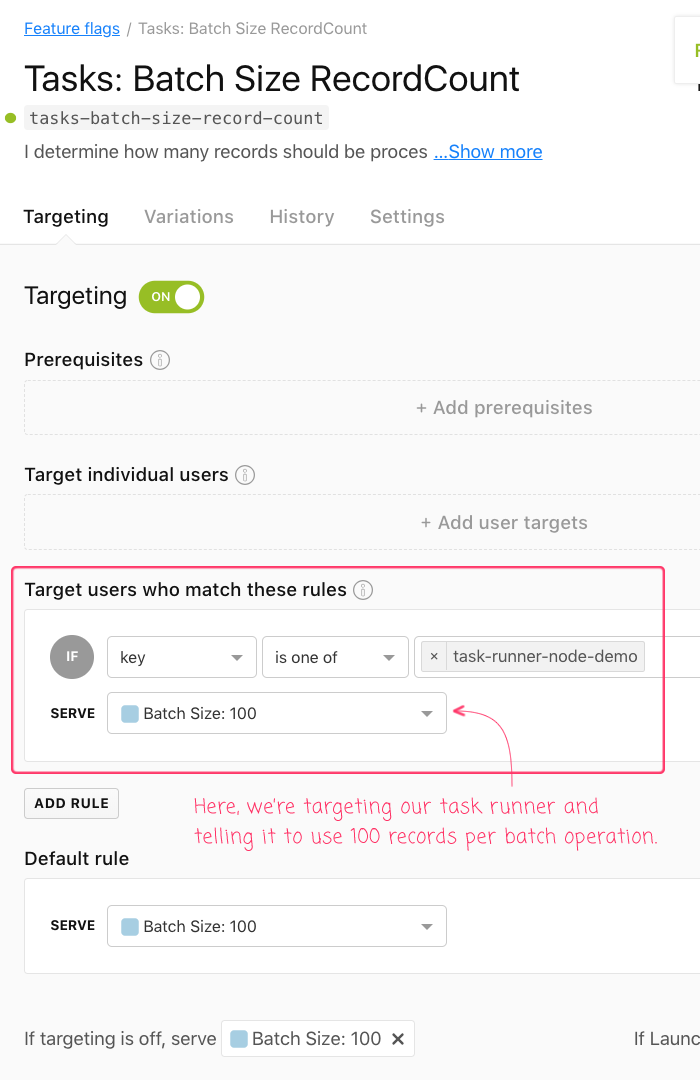 As this point, if we initiate the task runner in Node.js and then change the value that we're serving in LaunchDarkly, we can see the batch size of our database migration change in realtime: 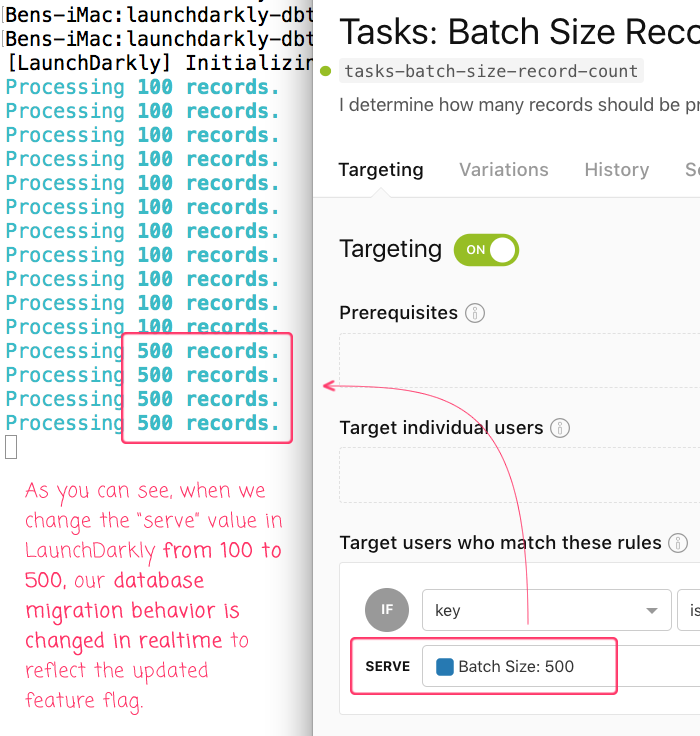 As you can see, the task runner started out by using batches of 100 records. Then, when we changed the LaunchDarkly feature flag to serve 500, our task running immediately responded by grabbing 500 records in each subsequent batch operation. With this approach we can gradually ramp-up our batch operations while ensuring that the database does not get overloaded (or start having a negative impact on our other users' experience).

To me, databases are kind of magical in so much as they tend to be able to handle way more load than I think they can. As such, it would not be surprising if my initial set of multivariate flag values ended up underutilizing the database throughput. Luckily, we can dynamically change the set of multivariate values at any time. All we have to do is go into the LaunchDarkly dashboard and configure our feature flag's variations: 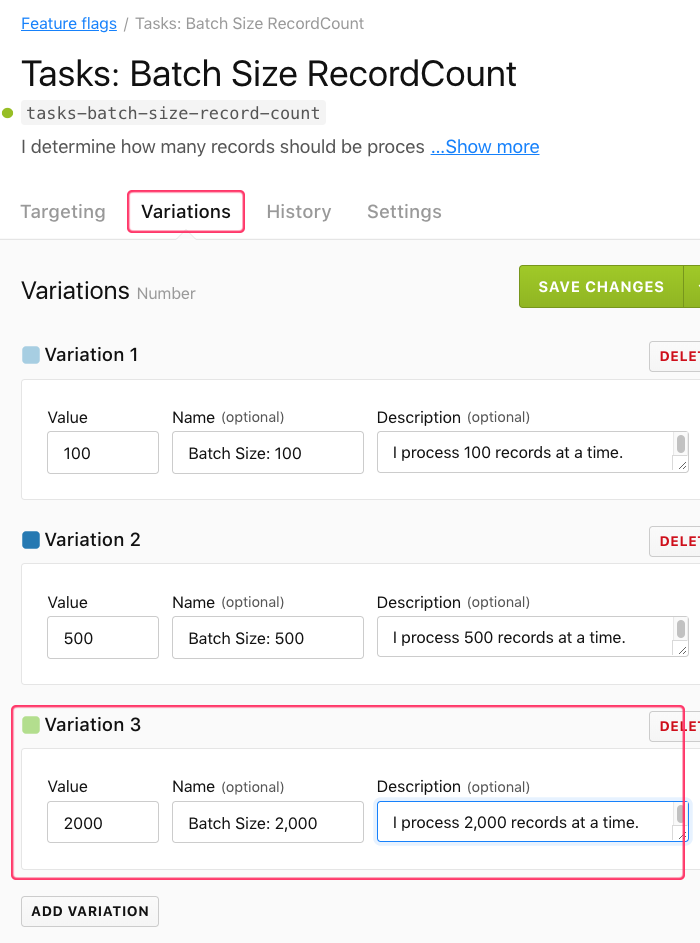 As you can see, I can go in an add new variations to a multivariate feature flag at any time. And, in this case, if I add "2000" as a possible variation and then start serving that value to my task runner, we can see that our migration - already in progress - will immediately pick up the change and start using the new batch size:

As you can see, even though the set of multivariate values was altered some time after our task runner had been initiated, the LaunchDarkly client picked up on the changes and immediately started applying them to subsequent batch operations.

That said, I just poked around in the LaunchDarkly docs and I see this warning:

... so, based on that warning, it reads as though you should be able to set a percentage rollout even for variations.

I'm not sure why it wasn't working for you. If I can carve out some time, I'll see if I can replicate. But, percentage-based rollouts are never something that I've actually tested explicitly -- I just assumed they work :D