The other week, I finally released a demo that I had been working on for several months: recreating the InVision App user interface (UI) using Angular 5. When I embarked on that demo, I had hoped to include animations; but, by the time I was done, it had gone on for so long that I had to defer animations to a later effort. And, well, now is that time - to at least start learning about the revamped browser animations module in Angular 5. The first step for me was looking at how to animate modal windows into and out of existence. And, how to block animations when jumping directly from one modal window to another.

First, I want to give a huge shout-out to Matias Niemela, whose post on the revamped animations module in Angular 4.2 was a huge help. Matias' explanations were super helpful; and, had details in them that I couldn't find anywhere in the official Angular documentation. That said, the official Angular documentation is also very good! But, you have to go beyond the "Animations Guide" and actually read the docs for the individual animation module exports, like transition(), query(), animate(), and so on.

Now, when it comes to animations, I tend to have very strong feelings. I like when animations and transitions provide value in the user experience (UX); but, I am frustrated when animations exist simply because designers believe, without question, that animations make an application more enjoyable. Animations should help to create a more organic, more self-explanatory application interface; and, when they don't, they should either be omitted entirely or, performed so fast that the user never becomes cognizant of them.

Once the user is in a modal layout, however, there's little value in transitioning from one modal experience to another. It doesn't help the user gain a better understanding of the application architecture; and, it will likely end-up serving more as a distraction than as an enhancement.

So, what I'd like to do with Angular's Browser Animations module is be able to transition to and from the modal window experience as a whole; but, to block animations if I'm transitioning directly from one modal window to another. In order to accomplish this, I'm going to lean on the fact that nested animations are blocked by default in the animations module revamp (this was not the case in the earlier incarnation of the module).

To be honest, at this time, I'm not sure if that answer is the right one. Or, if it's even generally applicable (as opposed to being specific to modal windows). But, I do like that the parent view doesn't actually have to know about the nested view's animation implementation details; or, if the nested view even animates at all.

That said, let's look at some code. First, to lay the ground work, I created an app component that renders one of two modal windows inside of a router-outlet:

Notice that the two modal windows open up with the following paths:

It's important to see that each of these paths contains a "modal" segment. This segment is the hook into the "modal layout" of the application. When I build modal windows into an Angular application, they all exist inside a common layout component. This makes managing them much easier: things like z-index and transition rules become clean and consistent. It also helps to enforce the "reusability" of a modal window - something that can become "unclear" if you conflate a modal window with a tangentially-related "feature module."

If we look at the app module, we can see we have have a "ModalViewComponent" that acts as the parent to both of our modal routes:

By having this ModalViewComponent wrapper, it gives us a place to exert some control over when and why the individual modals animate. For this demo, I want to block individual modal view animations if:

In both of those cases, I feel like the animation doesn't really support the mental model of the application and would only serve to distract the user. But, I do want to allow individual modal view animations if:

To accomplish this, I'm going to apply a "transition" to every state-change in the modal layout. And, I'm going to view every change in the nested view rendering (ie which modal window is rendered) as a state-change. This way, I'll have the option to block all nested animations for every modal-route change. To do this, I'm going to listen to the (activate) event on the router-outlet and increment a "navigationCount" value for every new sub-view (modal) that is activated. This way, I can use the "navigationCount" as the animation trigger "state", which will force a transition for every modal navigation. 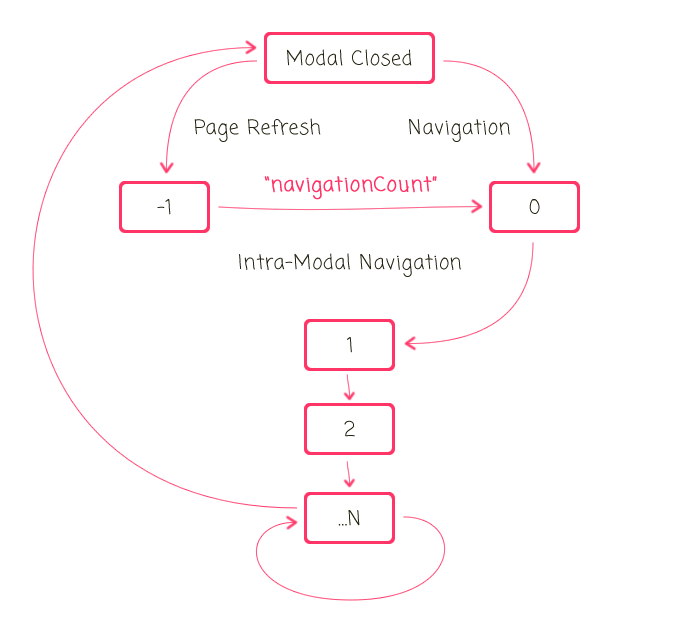 I'm not so good at making state-transition diagrams; so, let's just look at the code for the modal-view layout (ie, the layout that houses the other modal windows):

As you can see, every time an individual modal window is rendered, it triggers a change in the "navigationCount" property. I am then binding the navigationCount to the animation trigger that I am applying to the view with a Host Binding:

In this case, the most general transition ("* <=> *") allows me to block all nested animations by default; but then, with the more specific transitions, I can block or unblock as I see fit.

Now, that we have a sense of the "when" and "why" the modal layout is allowing transitions, let's take a look at the "how" implemented by the modal window itself. This demo has two modal windows, but they are basically the same. The only difference is that one transitions in from the left (left: -10%) and one transitions in from the right (left: 110%); the rest of the code is the same. As such, I'm only going to show the code for one of them:

As with the modal-layout, this modal-view attaches an animation trigger using a host binding. It then uses the query() meta-data to find and animate the content container within the view. But, notice that this component only cares about its own animations - it doesn't know anything about the parent container or the constraints of moving from one modal window to another; that logic is deferred to the parent view. The parent view takes care of the "when" and "why", this view takes care of the "how".

The animations module in Angular seems, at first, both simple and terribly complex. It seems simple when you read about it - it's just state transitions; but, it quickly becomes complicated and frustrating the moment you start to write code. And, as you can see in this demo, sometimes the very notion of a "state transition" is just an artificial construct being used to drive animation-blocking rules. I suspect that animations will be one of the harder things for which we try to create a clear and consistent mental model. Of course, I'm only just starting this journey. Perhaps it will become clearer as I proceed.

Great tutorial. I have always wanted to know how to use native modals!

And this bit, blew my mind:

Where is the value that specifies the modal to stop in the middle of the screen?

And how about the value that represents the modal's right hand side close co-ordinates?

OK. Had another look at the demo.
The right hand side one, is modal 2, but I would still like to know what:

Great question. As far as I understand it, the "*" in the style() meta-data tells the animations API to use whatever the "current" value of the given property is at the time the animation is initiated or finalized (depending on where you use it).

But, in this case, my "left: 50%" is actually in the CSS of the component itself (which is not in the actual demo):

I hope I didn't give too much misinformation here; but, that is how I currently understand it.

Ben. Thanks for the explanation. It all made sense once I saw the CSS!