The other day, I was working on an Angular 2 component that implemented an animation that could be interrupted by a subsequent state change. If the animation was allowed to complete naturally, everything worked fine. But, in the case that the animation was interrupted, I started getting change detection errors regarding the animation's trigger state:

Expression has changed after it was checked. Previous value: 'blue'. Current value: 'none'.

After debugging the problem, I realized that the issue was in my animation's "done" callback. Not only did the callback get invoked more than I realized it would, the callback "$event" didn't always line up with the current state of the component. Once I understood what was going on, it was easy to fix; but, it seemed like something worth exploring.

To explore the "done" callback for Angular 2 animations, I've created a simple demo that has a box that can transition to one of three states:

In order to get the box to always return to the "none" state, I have to hook into the animation's "done" callback, where I can explicitly set the trigger state back to "none" (after it has been "red" or "blue"). The problem with this is that "done" callback is invoked whenever a transition ends, even if the "overall animation" is still running. This means that if I initiate a "none => red" transition and then interrupted it, triggering a "red => blue" transition, I get the following sequence of events:

... which is where we would get the Angular 2 error change detection error:

Expression has changed after it was checked. Previous value: 'blue'. Current value: 'none'.

To get around this, we have to add some logic to our animation's "done" callback that only sets the trigger state back to the default state - "none" - if the callback wasn't invoked as part of an interrupted transition. And, to do this, we have to compare the callback event to the current state of the component.

If you look at the sequence of events above, you can see that we change the state of the component first, which then implicitly interrupts the active transition. This means that in the case of an interrupted transition, the "done" event's "toState" will not match the current trigger state. As such, we can be sure to only revert the trigger state back to the default state - "none" - in the case where the callback's "toState" matches the component's current state, indicating a "completed" transition.

Let's take a look at the code. In this case, the animation's "done" callback is the public component method, handleDone():

As you can see, in the handleDone() method, we compare the event.toState to the current trigger state. If the two values match, we know the transition completed "successfully", which means we can revert the state back to "none". However, if the two values do not match, we know that the transition completed "unsuccessfully" due to an interruption of the previous transition. In that case, we leave the state alone, knowing it is being managed by the subsequent transition.

If we run this app and trigger a "red" state followed immediately by a "blue" state, we can see that the "done" handler gets called multiple times: 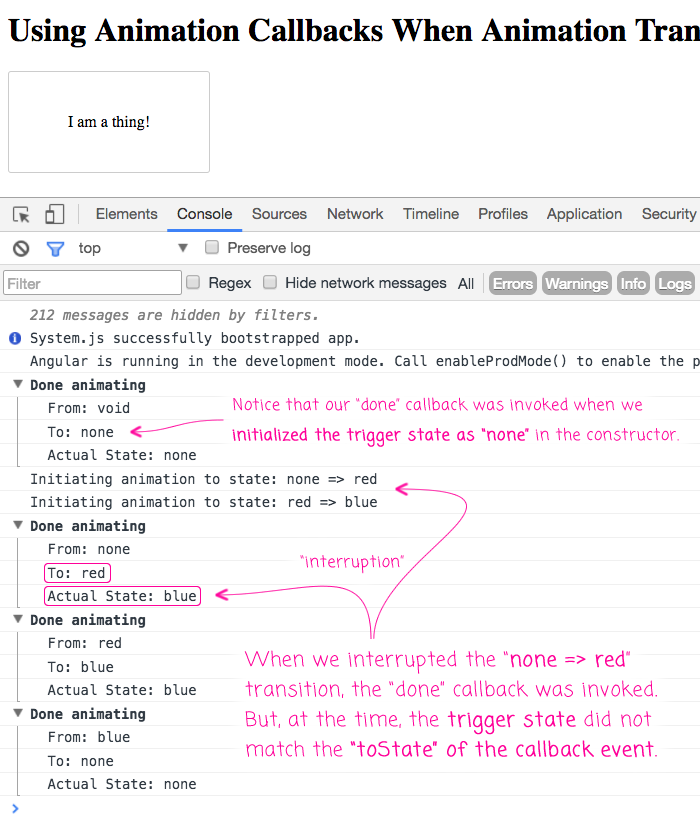 As you can see, the "done" callback gets invoked twice, once for the interrupted "none => red" transition and once for the completed "red => blue" transition. And, we can see from the logging that the event.toState does not match the trigger state when interrupted.

I'm still finding the animations in Angular 2 to be a huge mental shift from the simple CSS-based animations of Angular 1. I understand that the Angular 2 animations are more flexible and portable to other technologies; but, they are not simple. But, after ever stumble, my mental model grows stronger!

It seems Angular can not be a good choice for animation because it should be rendered by NPM and etc. It does not show the effect immediately on the client browser.

I am not sure I understand exactly what you mean? Are you saying that the animations are being rendered on the server-side? I think there might be a disconnect here - the animations are taking place in the browser. You can see this if you click on the "Run this demo" link near the top of the article.

I have not said it should be rendered on server side, but I have felt it is a bit heavy because it should be compiled by NPM interpreter. JQuery can be a better choice.

jQuery could be an option, for sure. Though, if you go the jQuery route, you'll have to get a reference to the actual DOM-node, which we don't need if we use the Angular 2 animations meta-data.

Interesting - I have not tried to create decorator yet in TypeScript. But, they seem kind of cool.

Have the same issue with 'done' phase. Your article helped me, thanks a lot!

Awesome, glad to hear that :D

Scratch that! I upgraded @angular/animations to 4.4.3 and the issue has been resolved.

It seems every time I hit my head on an angular problem and google long enough, I see your smiling face come up with a blog post that is thoughtfully constructed. Thanks for putting in the effort. While I haven't run into this particular problem yet, I'm sure it's coming and I've made a mental bookmark of this post.

Thank you so much for the kind words :D you rock!