To be clear, what I wanted to test here was whether or not this kind of meta-data even made sense in the Animations configuration:

Here, I'm telling Angular 2 that when the associated element doesn't exist, it should have the given style. From a state-rendering standpoint, this clearly makes no sense - a non-existing element has no style. But, from a state-transition standpoint, it might be helpful.

To test this, I put together a small demo in which I'm adding and removing a Box to the rendered view. In the animation configuration for the @boxAnimation trigger, I'm providing explicit "void" state and non-void state style:

Notice that my transition() meta-data doesn't define any styling. That's because it is using the styles provided by the individual state() configurations. The only configuration that we need to provide in the actual transition is the duration and any other optional timing information. And, when we run this in the browser, we can get the following output: 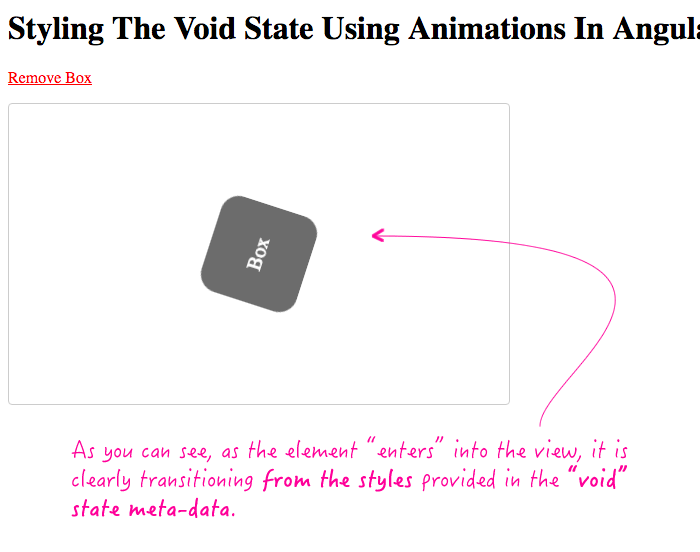 As you can see, the box element is clearly transitioning to and from the "void" state styling.

As a quick side-note, I should mention that the "*" state only needs to be defined in browsers that don't have native support for the Web Animations API. In Chrome, for example - which does have native support - the browser can determine the underlying values for the animating styles and therefore doesn't need the "*" state. In Firefox, on the other hand - which relies on the polyfill - we need to explicitly provide the browser with the underlying target values of the animating properties.

Long-story-short, you can style the "void" state in Angular 2 animation meta-data. This is a helpful feature because it means that you don't have to redefine the void styles in both the "enter" and the "leave" animations for a given element.