Two weeks ago, I set out to learn more about Redux by building a demo in which Magnetic Poetry pieces were synchronized using Firebase and AngularJS, but not Redux. The idea was to get a solid goal on paper that I could then refactor into using Redux for the state management. This turned out to be an arduous soul-crushing uphill battle. But, after much frustration and often feeling like I have no right to be a computer programmer, I think I finally got something working!

CAUTION: Just because I have something working does not necessarily mean that this is the right way to use Redux. It still hasn't quite "clicked" for me yet. And, I feel like I've ended up moving around code for no reason other than to say that I have a "thin Controller". So, just take this all with a grain of salt - this is certainly not a tutorial on Redux; but, rather, an attempt at learning Redux.

As I was going through the Redux tutorials, things started out quite simple and then progressively got more complex. But, as the complexity was added, I felt that the division of responsibilities started to blur too much. First, the action creators just create plain JavaScript objects. Then, through middleware, they can create Functions (which for some reason are referred to as Thunks). Then, through more middleware, Redux can orchestrate asynchronous behaviors, which may or may not require the actions to actually know about the middleware that's in place (which feels like very odd coupling).

Ultimately, I wanted Redux to be about state management and state management only. No orchestration, no API calls, no ambiguity about what an action creator should actually generate. As such I moved multi-dispatch and API integration up into a "Workflow" layer of the application that sits in between the Controller and the Redux store. This layer is the orchestration layer that fulfills the use-cases required by the user (and by the Controller). 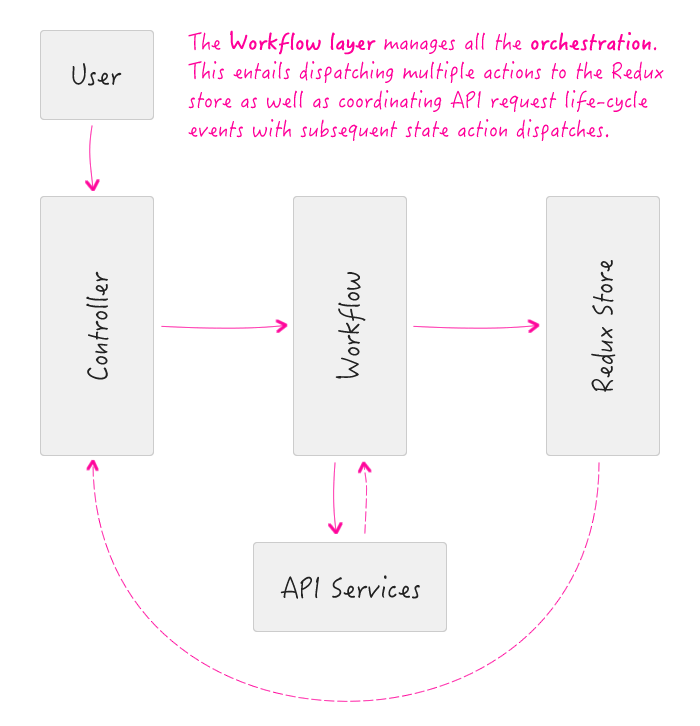 For this particular application, I don't bother with creating constants for Action Types or worry about Action Creators. For the size of this application, it felt like it did nothing but add code and noise. Plus, with an orchestration / workflow layer, the API of the workflow service documents the actions that can be taken in the application. At that point, the actual structure of the action objects is a mere implementation detail - not a source of documentation.

Also, I didn't use Immutable data. I started to try and use Immutable.js; but, it seemed to add a good deal of complexity to the code and would require the View to know about the immutable API (for data access), which felt like poor coupling. I know that I can convert Immutable data structures back into plain old JavaScript objects; but, with the volume of actions that I'm passing to the store (during mouse-move events) that seemed like very unnecessary overhead. In the end, mutating the state directly lead to much cleaner and much more concise code (in my humble opinion).

NOTE: I understand that in libraries like ReactJS, where you can leverage the shouldComponentUpdate() component method using old and new references, immutable data may be helpful. But, AngularJS 1.x doesn't provide a hook into that life-cycle.

There's a lot of code in this application, so I tried my best to order in a top-down manner of interest for better consumption. It's basically, from top-to-bottom:

The latter half of the code is just the implementation of various APIs and services which are not all that important to understand (but are required for the application to work):

Even in this approach, which I feel fairly good about, there are still some things that are fuzzy. Take "selecting a piece" for example. This requires two actions to be dispatched - one for the filter and one for the stack order. And, the workflow layer is calculating the stack order. If this action did not require an API call (to synchronize to the remote system), I could probably have moved it entirely into the reducer. But, since it had to make an API call, I left the logic in the workflow and used two separate dispatches. I don't love it. I don't hate it.

I still have a lot to learn about Redux (and about Flux data workflow in general). And, I'm sure I got a lot of this wrong; but, at least I have something working - a solid base from which I can continue my journey.

Thanks for writing this up Ben. I really appreciate how you include your thinking behind some of your decisions. For example, I decided to try to use immutable.js despite having some of the same thoughts you did, i.e. what value is this adding? Or, when someone on my team asks me "why?" can I provide a clear answer beyond "cause Abramov said so!".

Most of what I'm writing is CRUD-like operations against an API, so nothing crazy, but some simple user workflows still don't feel right to me. For example, I might have a list of 5,000 things that I sometimes want to show, but most of the time I only need to display a small subset of that. So in my state tree do I maintain a single collection that has all 5,000 items in it, and simply filter that down when I need the smaller list, or do I maintain the larger and smaller lists in different parts of the state tree (depending on what they're for)? If you start using two collections in the state tree, then it seems like we should just use angular services to host the data and be done with all this.

Do you think it's the fact we're using Angular that makes this so confusing?

Really glad you enjoyed this! Wrapping my head around this has been quite challenging.

First, I don't think that there is really much difference between AngularJS and React. Yes, they are different in the way they are wired together; but, that's just an implementation detail. Meaning, at some point, you have to create an instance of the Store and you have to do so with Reducers.... and whether or not you have to use `require()` to gather those things or something like AngularJS' dependency-injection mechanism -- that's just "detail." As far as I'm concerned, the overall approach isn't really that different.

So, when people say that something does or doesn't make sense with AngularJS, unless they can give me good specifics, I just dismiss it as "noise."

As far as the actual structure of the state tree for something like you are talking about, that's a great question. At this point, I don't have a good mental model of "good" or "bad" state tree design. To me, it's the same as how I might think about it if I were to store it in an AngularJS controller $scope - in that, I do what needs to be done to make the app work, I suppose.

I tend to err on the side of duplicating data rather than trying to keep it totally normalized. I think this makes it much easier to think about. Plus, it lets different data sources evolve independently without having to worry about, "well I need data-point X in one view but it's not available in API call Y", etc..

I know I'm not really answering your question :|

My gut would be to store them in two different parts of the state tree, especially if the 5K list is rarely used, and may not even have to be loaded during a given user's experience of the app. But, I don't know very much about Redux yet and I don't really know much about your app, so that's totally shooting from the hip.

No, I appreciate the comments. My question about Angular might reflect my inexperience with React, but I was thinking that Angular provides things like services to help manage state across different parts of an application. There's also the two-way binding that seems to conflict on some level with the overall FLUX pattern, and redux specifically.

One of the aspects of redux that drew me to it is how it could help handle real-time updates using something like SignalR or Firebase (we're a .NET shop for the most part). With redux, everything should boil down to an action that caused a change to the state tree. So my presentation code doesn't care if I refresh some list because a user clicked a button, or the server indicated that someone else added something to the list. Each of these processes simply create the required action (via an action creator service in my case), so there's no guesswork around what caused my state to change. We're just getting to the state where we're adding that functionality, so hopefully we're making the right decision.

Honestly, I don't have all that much experience with React either - just local R&D - nothing ever pushed to production. And, they are very different in the overall architecture; but, at the end of the day, you have objects that have data and provide behavior to the UI.

But, going back the real-time updates, that actually the thing that really made me think about Redux (or Flux in general). Without Redux, I was watching that kind of stuff in 2 different places - in my Controller and in my data cache - and trying to keep those in sync was very frustrating. At least with the current approach (in this demo), the WebSockets (ala Firebase) are managed in one place - the workflow - and then the Controller just updates whenever the state announces a change. I do like that.

<blockquote>So, when people say that something does or doesn't make sense with AngularJS, unless they can give me good specifics, I just dismiss it as "noise."</blockquote>

I wish you'd been at a talk I gave recently at my company that I think would have clarified this. But to give you hopefully a short summary: the main strength of React is that it allows you to separate state management from view manipulation, by modelling the view as a (pure) function with the current state as input. Redux provides you with the ability to model the current state as a function with the previous state as input. This works great together: something happens, which results in (old state) -> (new state) -> view. Redux's output is React's input.

With Angular, however, state management still is interwoven with your components, and often is implicit to boot. And this can get messy. I haven't looked at your code above, but if you're trying to bolt Redux onto Angular, I can imagine that you're watching ng-model changes, then perhaps calling an action to synchronise the state that is at that point still local to the scope, and then when the state as managed by Redux changes, you will have to propagate that back to Angular.

That's about as short as I could keep it - hope it made some sense. I think I might go into this more in depth in a blog post some day in the future.