This morning, I was trying to learn how to use Redux when I found myself in a situation in which I wanted to break out of a reducer Case block early based on a dynamic condition (whether or not an item with the given ID could be found). If I was in a vanilla function, I'd simply create a "guard condition" with a return statement inside of it; but, I didn't want to return out of the reducer [function] - just the case. Then it occurred to me, maybe a Case block could employ multiple break statements in the same way that a function can employ multiple return statements.

To test this, I created a function that would test a given expression against two sets of Case block. Each case block would match against three values in a range; and, it would console-log each value, in the range, up to the given value; but, it will "break" out of the case when it reaches the given value.

It's probably easier to just look at the code:

As you can see, within each case "range", I'm only logging-out up to the given letter; then, I'm attempting break out of the case with a conditional break statement. And, when we run the above code, we get the following output: 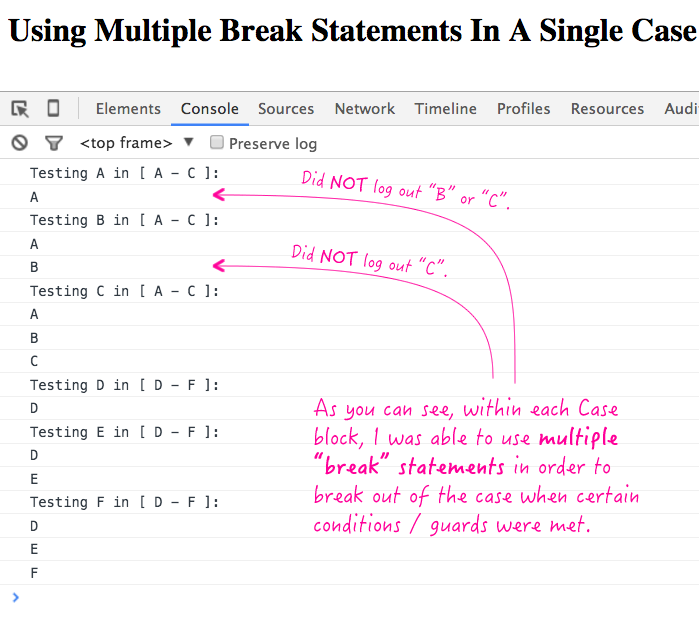 Very cool! The conditional break statement, inside of the if-blocks, worked just as we had hoped. You can use multiple break statements inside a single case block in JavaScript and it will act just like multiple return statements inside of a single function. I'm sure there are people who will say that this is a horrible idea, just as they would likely say this about multiple return statements. But, for guard logic, I think this makes for a wonderful feature of the language.

This reminds me of [Duff's Device](https://en.wikipedia.org/wiki/Duff's_device).

A small note regarding the term "case block": According to the spec (www.bennadel.com/blog/2986-using-multiple-break-statements-in-a-single-case-block-in-javascript.htm), the switch statement contains a *single* case block, which in turn contains one or more case clauses. The case clause finally contains a list of statements (which is optional). So, it would be more correct to say "case clause" instead of "case block" in your article.

I much needed this bit of knowledge - thanks again to you Ben.