When it comes to CSS (Cascading Style Sheets), I know enough to get some things done; but, I still have a tremendous amount of learning left to do. I have plenty of knowledge-gaps. One such gap presented itself - eventually - as I was trying to get child animations to work in AngularJS. What I eventually realized was that I had a fundamental misunderstanding of how CSS inheritance works. Specifically around properties, like transition properties, that are not inherited by default.

First off, this is not an AngularJS-specific problem (as you might be lead to believe from the post title). This is just a byproduct of CSS behavior. It just so happens that I am exploring it in the context of AngularJS and Angular's ngAnimate module.

Because inherited CSS values have a "seamless cascading" effect, it's easy to forget (or to never even consider) the fact that each node still inherits directly from its parent. It's just that, in many cases, each parent automatically inherits from its parent until you get to a supplied value. When it comes to non-inherited values, though, it's this parent-dependency that through me for a loop.

Now, if you wrap "B" in another unstyled node "Z", "B" will stop inheriting A's transition properties:

The reason for this is that "B" doesn't inherit from "any ancestor"; rather, it inherits from its parent, wich is "Z" in this case. However, since "Z" wasn't explicitly told to inherit properties, "B" ends up inheriting Z's "initial values" which are likely not what "A" is using.

To see this in action, I've created a small AngularJS demo with 3 boxes. Each box has a nested "thumb" which will animate-in when the box is mounted on the DOM. In 2 of the 3 cases, however, the "thumb" is wrapped in an intermediary container: 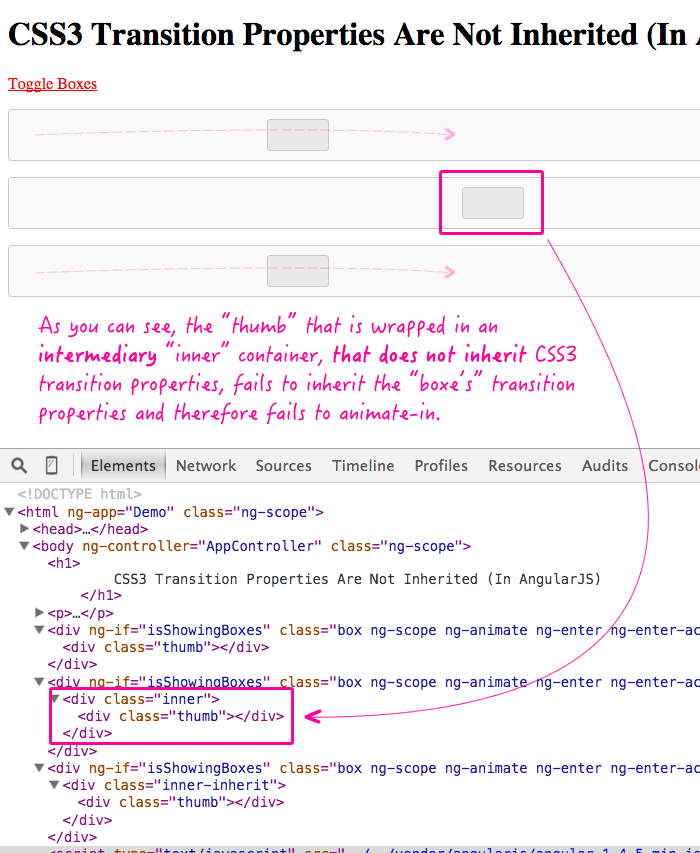 For the experienced CSS developers out there, this might be painfully obvious. But hopefully, for the intermediate CSS developers like myself, this can help shed some light on why some of your nested animations aren't executing.

Over on Twitter, @tedmasterweb asked me if this was to "spec" or if this might be a bug. Based on what I've read on the MDN (Mozilla Developer Network), I am keen on saying this is according to the CSS specifications. When you look at the transition-related CSS properties, they are defined as:

And, when you look up what that means:

>> When no value for an non-inherited property (sometimes called a
>> reset property in Mozilla code) has been specified on an element,
>> the element gets the initial value of that property (as specified in
>> the property's summary).