A couple of weeks ago, I demonstrated that animating static child elements, in AngularJS 1.4, involved the use of the "transition-delay" CSS property. Unfortunately, when I went to apply this in an AngularJS 1.2 application, I discovered that the use of "transition-delay" was actually part of the 1.4 rewrite. AngularJS 1.2 (and 1.3 for that matter) use a different means of blocking animations during the configuration phase. After a couple of hours adding "debugger" and "console.log()" statements, I finally figured out what was going on. And, unfortunately, animating child elements in AngularJS 1.2 requires a slightly less elegant approach.

The ngAnimate code is rather complex and hard to follow. So, I don't pretent to really understand what's going on - it's written by people much smarter than myself. But, from my best estimate, AngularJS 1.2 (or rather, ngAnimate 1.2) blocks configuration-phase animations by adding this inline style to the transitioning element:

Through the use of a "debugger;" statement, we can see this in the Chrome dev tools: 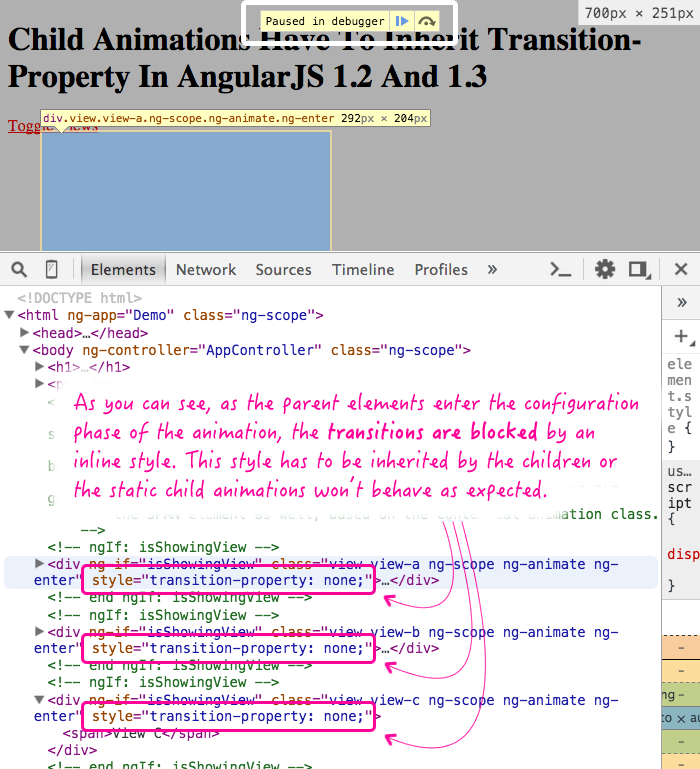 This way, the child behavior can be overridden by the inline "none" value while still inheriting the appropriate property once the transition-block is removed.

To see this in action, I've refactored my previous transition-delay demo to use AngularJS 1.2 (or 1.3). In this demo, I have three Divs that will "enter" and "leave" using an opacity transition. And, as they do, the child Span elements will transition their margin-top values.

And, here's the CSS that controls the animation. What you'll see is that the "view" element has to define both the "opacity" and the "margin-top" transition-property values. This way, the dynamic elements can use "opacity" while the static child elements can use "margin-top." And, to get that to work, the contextual CSS needs to inherit the transition-property value provided by the parent:

As you can see, the static child elements, in AngularJS 1.2, basically has to inherit all transition-related values.