A couple of days ago, in response to my post about animating static elements using ngAnimate, Dave Ackerman asked me about the new "ng-animate-ref" feature in AngularJS 1.4. I had not seen of this before, so I wanted to take a quick look. The documentation isn't super obvious at first; so, this post is really just me trying to get something to work.

The goal of ng-animate-ref is to allow an element to animate across two structural changes within the DOM (Document Object Model). To be totally honest, I can't think of a great use-case for this type of animation off the top of my head. The first few experiments that I wanted to try ended up being a no-go as they only had one structural change. So, while I got something working for this demo, I don't think I have nearly enough experience to speak about proper usage.

Before we look at any code, I had a few technical blindspots that I had to overcome through trial-and-error and much source code viewing:

Ok, that said, let's take a look at some code. In the following demo, I have two ngRepeat lists, one on either side of the screen. When an item in one of the lists is selected by the user, it is removed from the current list and inserted into the other list. We're going to use the ng-animate-ref feature to animate that change across the two lists. Since ngRepeat creates structural changes, we will be marrying our "ng-leave" element to our "ng-enter" element, using the "thumbnail-ref-container" class, and animating the embedded thumbnail to the new location.

Now, let's look at the CSS for this demo. The transitional stuff is down at the bottom:

The ng-animate-ref transition runs in two phases: out and in. This gives the two related views time to get into their appropriate locations (remember, the target location isn't recalculated mid-phase). In this case, however, I don't need a transition for the "out" phase since the parent ngRepeat containers are always on the page. As such, I don't need to wait for the target container to show up - I can forego the "out" transition and only define the "in" transition, which will animate the thumbnail from one list to the other.

When we run this page and click on two of the images, you can see that we get two temporary IMG tags appended to the BODY tag: 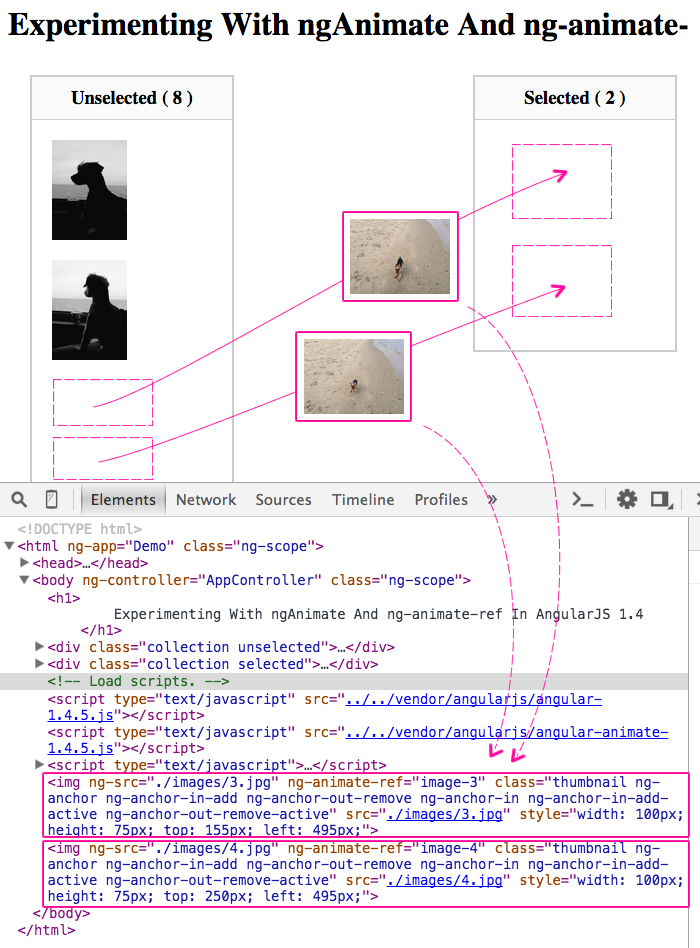 Anyway, that's my first look at the ng-animate-ref feature. Since this is both a new feature for AngularJS and a new feature for myself, I apologize ahead of time for any technical inaccuracies or poorly worded explanations in this post. I'm just one man trying to wrap his head around some funky stuff!

Tweet This Deep thoughts by @BenNadel - Experimenting With ngAnimate And ng-animate-ref In AngularJS 1.4 https://www.bennadel.com/go/2910

Got Job! i need this functionality.

Very cool - glad it was helpful.