I knew that I had to keep the "visual count" in the component state so that I could .slice() my items within the render() function (which can't know anything about the physical DOM). But, I didn't know how to actually obtain and set the visual count. My first thought was to put this calculation inside of the componentDidUpdate() method so that I would recalculate it every time the virtual DOM was flushed to the physical DOM.

This idea ended up leading to an infinite loop and "Maximum call stack size exceeded" errors. The problem was that componentDidUpdate() queried the DOM, ran the calculation, and called setState(). Once setState() was called, ReactJS went to re-render the DOM and then called componentDidUpdate(). With ran the calculation and caused a re-rendering, ad infinitum until the JavaScript failed.

I probably could have jimmied the shouldComponentUpdate() method to help prevent the infinite loop; but, this felt like a hack on top of a hack. Ultimately, what I figured out was that the setState() method takes an optional second argument which is a callback that will be invoked after the state changes have been flushed to the DOM. This callback is very much like componentDidUpdate(); but, it only gets called once for a specific call to setState(). Now, instead of trying query the DOM after any arbitrary rendering, such as I was doing in componentDidUpdate(), I can query the DOM only after I know that it has been affected by relevant changes.

To see this in action, I've created a demo in which I have a horizontal container that renders a list of items. The container can be resized via CSS (full width vs. half width); or, it can be resized as the browser window is resized. In each case, I am providing a setState() callback that will allow me to hook into the post-render life-cycle where I can recalculate the number of elements that will fit in the container: 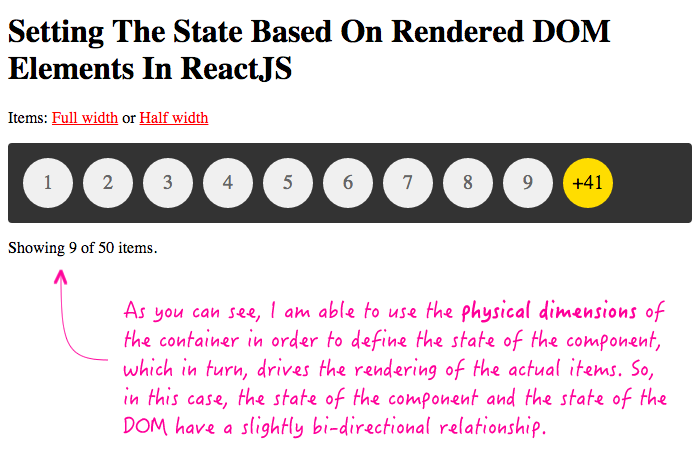 Tweet This Titillating read by @BenNadel - Setting The State Based On Rendered DOM Elements In ReactJS https://www.bennadel.com/go/2915

Some days, someone just perfectly solves your problem for you. I needed to figure out how to set a class on an element if its child exceeded its height (if it overflowed, on other words), and this was a perfectly clear explanation of how to do exactly what I needed. Thanks for taking the time to share it.