As I've been getting into ReactJS, I've run into a few situations in which it would be convenient to call the setState() component method several times within a single function. This is often to apply different bits of logic to different parts of the state. When doing this, however, it's been unclear in my mind as to what the state will be in between these calls to setState(). So, I decided to dig a little deeper into the mechanics and have found that calls to setState() may or may not be synchronous depending on how the mutation was originally triggered.

The ReactJS documentation on the setState() method is a bit confusing. In a big, bold, red warning, it states:

setState() does not immediately mutate this.state but creates a pending state transition. Accessing this.state after calling this method can potentially return the existing value.

Digging into the source code (which is not the easiest to understand), it seems that the ability to defer state mutation depends on how the mutation event was triggered. If it was triggered by some event that ReactJS can monitor, such as an onClick props-based handler, then ReactJS can batch the updates, to the state, at the end of the event. If the state change was triggered by a timer or some other developer-orchestrated event handler, however, then ReactJS can't batch the updates and has to mutate the state immediately.

To see this divergence in action, I've created a demo that mutates the state using a single component method. But, I am invoking that method using several different bindings:

As you can see, the updateState() method is called in three different ways: 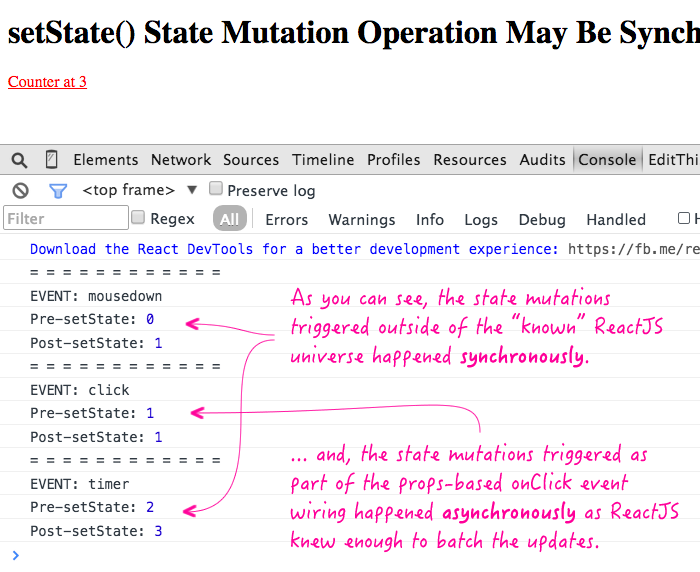 As you can see, only the onClick trigger had the same state value both before and after the call to setState(). This is because ReactJS was able to batch the state mutation at the end of the event.

Since the actual change to the state may or may not be synchronous, it's best to just assume that it will always be indeterminate and to not reference the state using any assumption one or the other. And, even if you are very confident in how it works, it seems that the whole approach to batching mutations is driven by an injected "strategy component" which may change in the future. So, again, probably best not to make any assumptions one or other other.

The question is, whether there's a way to explicitly batch react setState calls? During known boundaries where we know plenty of work is to be done, for example.

Thank you for this analysis. I got bit by this on premature re-render having incorrectly concluded setState was always a batched/deferred update.