The other day, Joel Hill and I were pair-programming on some complex SQL queries, attempting to figure out how to group rows while simultaneously limiting the aggregation and extracting portions of it. I don't believe that what we were trying to do was possible within a single query (at least not in MySQL 5.7); but, it got me noodling on JSON aggregation. I've looked at using JSON_ARRAYGG() and JSON_OBJECTAGG() in the past; but, I wanted to follow-up with some inspiration from Scott Steinbeck on nesting JSON functions inside JSON aggregates in MySQL 5.7.39.

I've only dabbled in these functions so far. And, when I do, I normally use column names to invoke these functions. But, as Steinbeck mentioned in the comments of my previous post, we can use JSON expressions inside our JSON aggregates. What this means is that we can extract multiple columns from each row within our grouped records.

To explore this concept, let's create a MySQL database table that has user phone numbers. Each user can have zero-or-more phone numbers:

In this MySQL query, the JSON_OBJECT() calls are being performed on a per-row basis for each row within the grouping. The JSON_ARRAYAGG() and JSON_OBJECTAGG() then take those results and roll them up into a single value per grouping (as an array literal or object literal, respectively). And so, when we run this SQL, we get the following output: 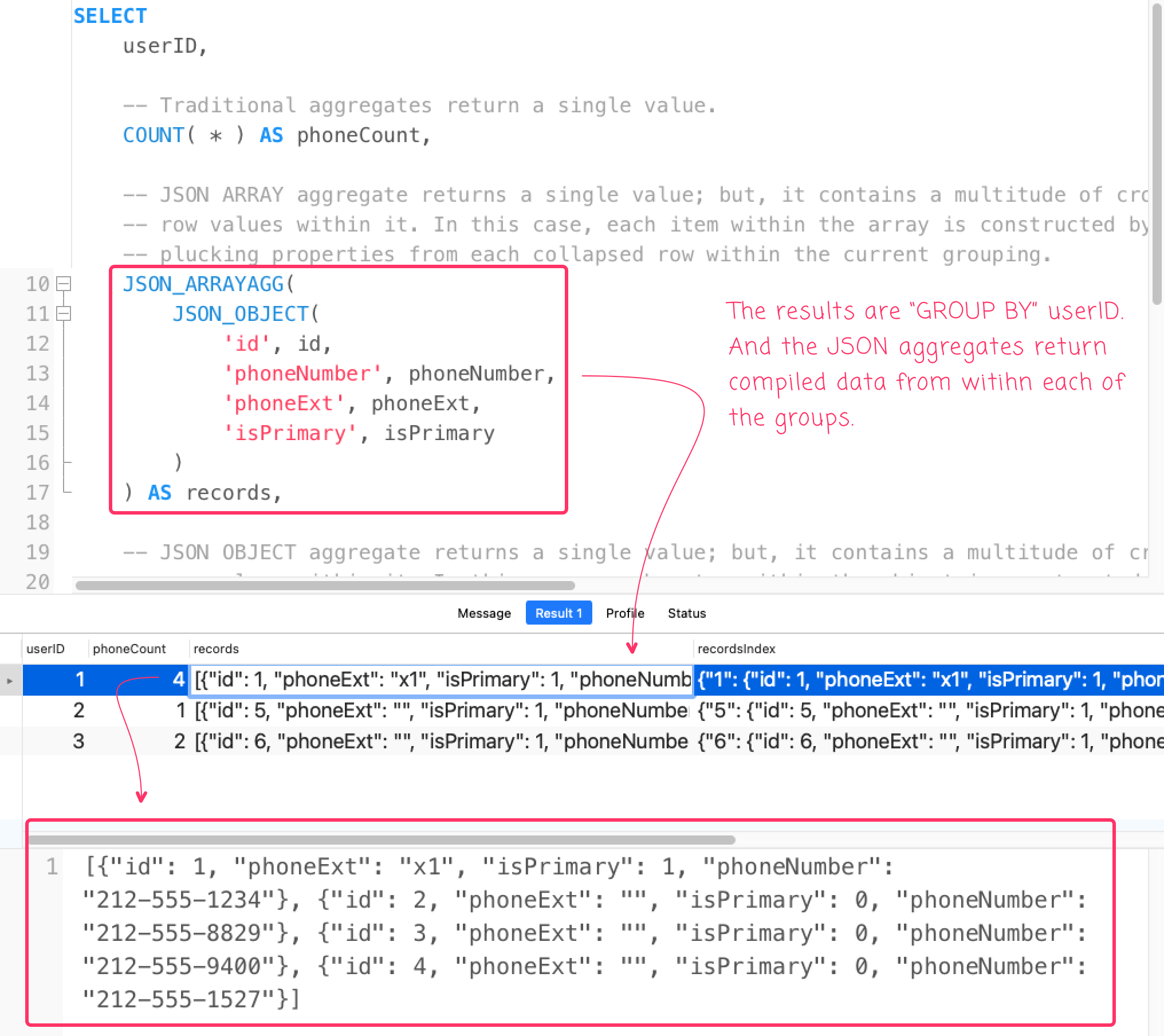 As you can see, we get 3-rows back in our GROUP BY MySQL query (1 row per user). And, within each row, we were able to also extract all of the phone numbers associated with each grouped user! That's pretty cool.

Tweet This Great article by @BenNadel - Nesting JSON Functions Inside JSON_ARRAYAGG() And JSON_OBJECTAGG() In MySQL 5.7.38 https://www.bennadel.com/go/4350

Another day where Ben teaches me something.

Ha ha, always glad to learn in public for this very reason 💪

This nested use of JSON_ARRAYAGG() and JSON_OBJECT() can be used in concert with LATERAL joins in MySQL 8 to run some pretty interesting queries. In this post, I'm using it to gather the "Top N" rows per each row in a group:

This "Top N" concept has, historically, been very challenging in SQL.

While trying to store data into table using JSON_ARRAYAGG, it wraps each value of array with double quotes. How to overcome this?

So, are you running an aggregate and then storing it into another table with something like an INSERT INTO ... SELECT statement? I've only used JSON_ARRAYAGG() to pull data out of a table; I haven't used it to store data into a table.

That said, it really shouldn't be adding quotes to anything, as far as I've seen. In fact, I've a few times had to use JSON_QUOTE() to force MySQL to add quotes around a value that I was using in a JSON_CONTAINS() call.