In my mind, a "namespace" is a path-prefix that uniquely identifies a set of ColdFusion components. I'm not a Java developer; but, I believe that a common practice in the Java world is to define namespaces using this convention:

Meaning, the "Acme" corporation might use the following namespace for their analytics package:

... and the "Cyberdyne Systems" corporation might use the following namespace for their analytics package:

This way, a developer could theoretically import both analytics packages without causing namespace conflicts.

If I wanted to create a product called "Strangler" (as in the Strangler pattern), I might want to use the namespace:

... can be instantiated using the given dot-path:

When you want to use a dot-path that doesn't correspond to a physical folder path, you can use a per-application custom mapping to define a dot-path prefix. Historically, when I've done this, my "prefix" has been a single token, like lib or vendor or extensions. But, I don't believe there is any technical reason why we can't create a custom mapping that includes multiple, non-existent folders.

Going back to my product namespace for a second:

If I were to consume this dot-path without a per-application custom mapping, I would have to have the physical folder path:

But, if I only want to use this as an internal namespace and not as a file-system requirement, I can set up a per-application custom mapping that maps /com/bennadel/strangler onto an existing directory within my ColdFusion application.

To see this in action, let's create an Application.cfc that maps the non-existent directory, /com/bennadel/kablamo, onto the current directory. Then, let's try to use the dot-path, com.bennadel.kablamo to instantiate ColdFusion components:

As you can see in my onRequest() event-handler, I'm using the namespace com.bennadel.kablamo to instantiate a ColdFusion component that lives in my local ./lib directory. This component is also using the same namespace to defined its structure:

As you can see, this ColdFusion component is using the com.bennadel.kablamo namespace in both its extends attribute as well as in the return type of one of its functions.

Now, if we run this application in either Adobe ColdFusion 2021 or Lucee CFML 5.3.8.201, we get the following output: 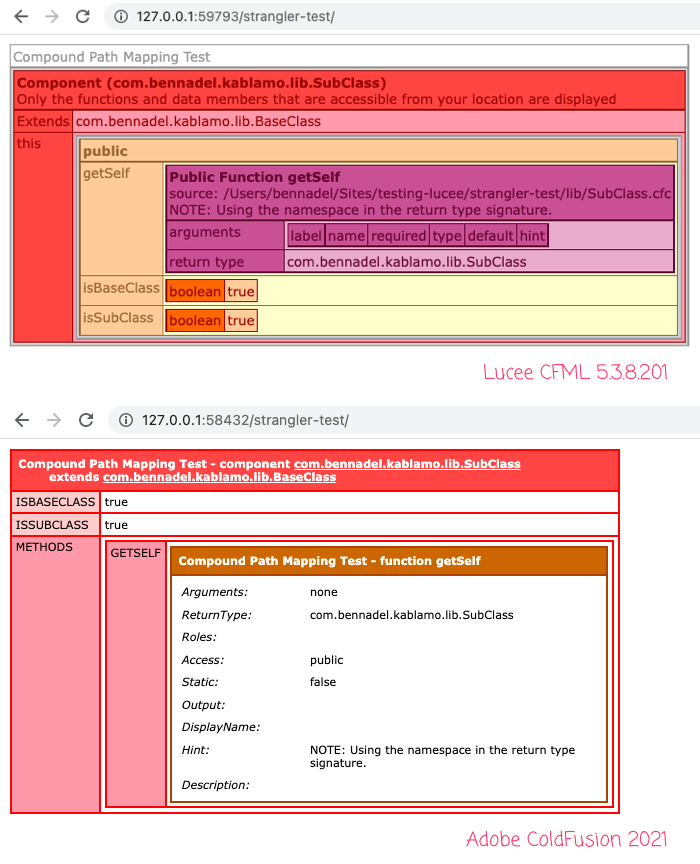 This output demonstrates a number of key points:

I don't believe I've ever considered using a per-application custom mapping that includes a totally non-existent folder path! Normally, I'm just creating short aliases to existing folders. But, it's awesome that this actually works; and, works in both Adobe ColdFusion and Lucee CFML.

A Note on the import Tag in ColdFusion

The downside of namespaces in ColdFusion is that the component dot-paths become pretty verbose. One way to get around these long paths is to import a component directory; and then reference the components without paths. Unfortunately, the import tag is a compile time directive, not a runtime directive. As such, we can't use per-application mappings in our import paths.

If you define your custom mappings in the ColdFusion admin, they will work with the import tag (or so says the documentation). However, that makes it harder to keep your custom paths in source control. Which is why I'm opting for the per-application, albeit more verbose, custom mapping solution.