Earlier this week, I looked at using SERIALIZABLE transactions to enforce unique naming constraints in MySQL and Lucee CFML. Transaction isolation isn't a topic that I'm super comfortable with. As such, I wanted to continue exploring the way in which transaction locking affects concurrent access to a given database table. More specifically, I wanted to better understand the scope of row-locking that is applied in a SERIALIZABLE transaction in MySQL 5.7.32 and Lucee CFML 5.3.7.47.

To quote from the MySQL documentation on isolation levels, this is the behavior that we get when we wrap a collection of CFQuery tags in a SERIALIZABLE transaction:

This level is like REPEATABLE READ, but InnoDB implicitly converts all plain SELECT statements to SELECT ... LOCK IN SHARE MODE if autocommit is disabled.... Using LOCK IN SHARE MODE sets a shared lock that permits other transactions to read the examined rows but not to update or delete them.... InnoDB locks the index range scanned, using gap locks or next-key locks to block insertions by other sessions into the gaps covered by the range.

It's the last part - "block insertions by other sessions into the gaps covered by the range" - that I want to explore in this post. And to do so, we're going to bring back our widget table:

The main things to note about this table are that each row is "owned" by the userID. And, that we have an index on the table which allows us to quickly scan all rows for a given user. This is why the SERIALIZABLE transaction in my previous post was able to enforce a unique naming constraint across all records owned by a given userID.

But, I want to make sure that the locking there was only applied to the rows owned by the given userID; and, that I wasn't accidentally locking all rows in the table (which would also allow for unique naming but at a much higher cost to performance).

To test this, we're going to touch multiples rows owned by two different users and then see if the execution times demonstrate a cross-contamination of locking. Given two users, we're going to perform these three operation in parallel:

If the row-locking is indeed user-specific, we should expect the first two operations to be serialized and the third operation to execute independently.

In the following ColdFusion code, each of the aforementioned operations will be executed inside an asynchronous CFThread tag body. Each CFThread contains a sleep() command to help ensure that each thread has time to spawn and overlap in its execution of SQL queries. Our first SERIALIZABLE transactions contains a sleep of 3-seconds mid-transaction in order to make sure that it is still executing when the other two threads finish their sleep of 1-second:

As you can see, the first CFThread to insert a record for Sarah contains a SERIALIZABLE transaction. We want to see how this transaction affects the second thread for Sarah as well as the third CFThread for John. And, when we run this ColdFusion code, we get the following output: 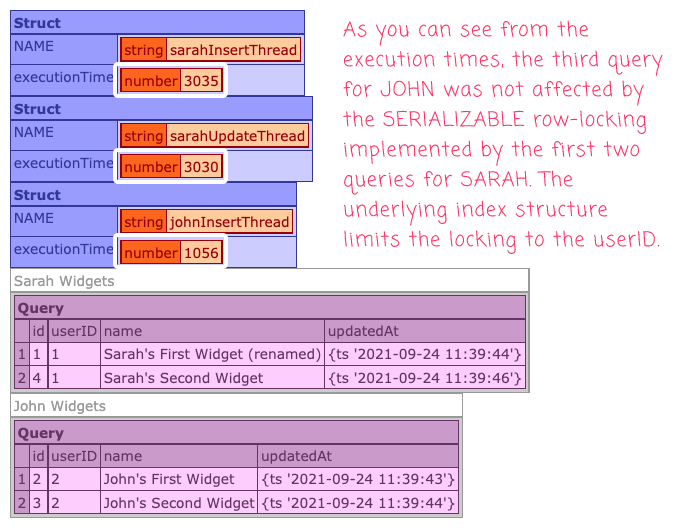 As you can see from the execution times, the two queries for Sarah ran for about 3-seconds - the duration of the first SERIALIZABLE transaction. The third query for John, however, executed in just about 1-second. This demonstrates that the third query for the different userID value was not affected by the gap locks or next-key locks being applied by the first query.

To be clear, this is happening because of the underlying IX_byUser index on userID. If we were to go into the database schema and remove the IX_byUser index, re-running the above ColdFusion code would result in a transaction deadlock because the two SERIALIZABLE transactions - the one for Sarah and the one for John - would both be locking the same rows (essentially forcing a full-table scan). However, since the IX_byUser index is used in the isWidgetWithNameExists() user-defined function (UDF), it allows MySQL to limit the scope of the row-locking to a given userID, therefor allowing Sarah's records and John's record to be updated independently.

Historically, I've used database transactions to enforce atomicity - that is, an all-or-nothing update. However, I'm starting to get more comfortable with the use of transactions to enforce cross-record constraints, such as unique naming constraints. And, it's good to see exactly how the underlying index structures affect the scope of row-locking.

As I've continued to explore some of the SERIALIZABLE transaction scoping in MySQL 5.7.32 (the version I run my R&D against), I've run into some cases that I am having a hard time explaining. I think it relates to some other people's experiences:

It seems like the index-based locking has trouble when there are no rows in that index yet at all. It looks like the scope of the lock may extend beyond the suggested index in that case, which could then cause unexpected deadlocks.

In this particular post, we don't run into this issue at all since both Sarah and John had an existing record before we then went to test the scope of the locking. As such, each segment of the index, IX_byUser, already had data in it, which I think is why there was no deadlock in my demo.

I'll try to follow-up with something that shows the empty-vs-populated index outcome.

As per my comment above, on the change in row-locking based on the existing / non-existence of rows, here's my follow-up post:

This appears to be related to the way in which MySQL has to lock something called supermum. I don't really understand what this means; but, I demonstrate the change in the above link.