Over the weekend, I listened to an episode of the Hidden Brain podcast titled "The Influence You Have". In it, Shankar Vedantam discussed the power of influence that we can unknowingly exert over other people; and, conversely, how difficult it is for people to say "No" when asked to do things such as donate money or go out on a first date. This got me thinking about wedding invitations. And how the RSVP card has always felt too black and white with its Yes/No dichotomy. I believe that some user interfaces (UIs) - like RSVP cards - would benefit greatly from an option that allows people to gracefully opt-out when the user experience (UX) of saying "No" comes with a heavy emotional toll. 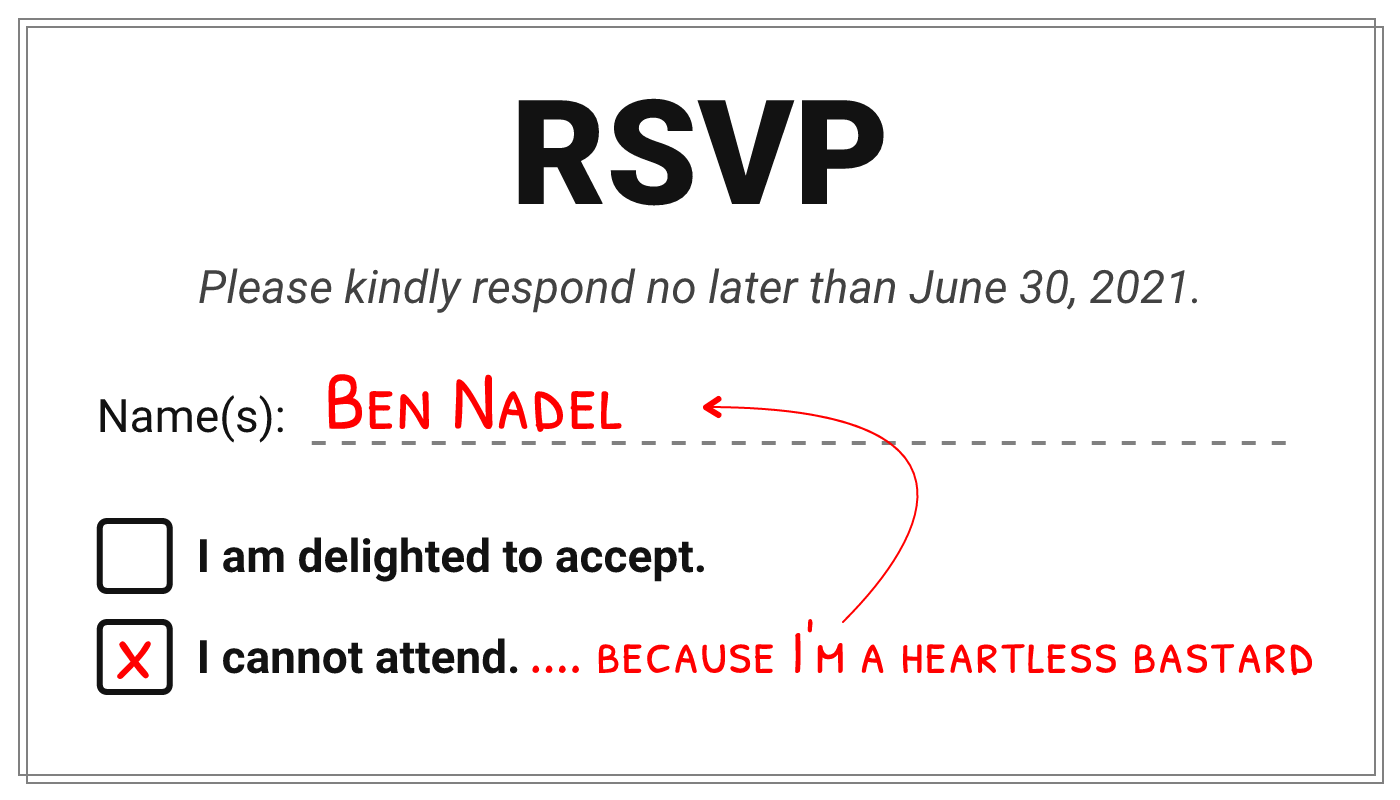 In an ideal world, I would just RSVP "No" to every wedding invitation that I receive. But, no matter how they phrase "No" on the RSVP card, I feel like a total bastard. What I want - what I think would be an amazing user experience - would be a way for me to say "No" while also saying "Yes" in a fuzzy sort of way.

Imagine an RSVP card that looks more like this: 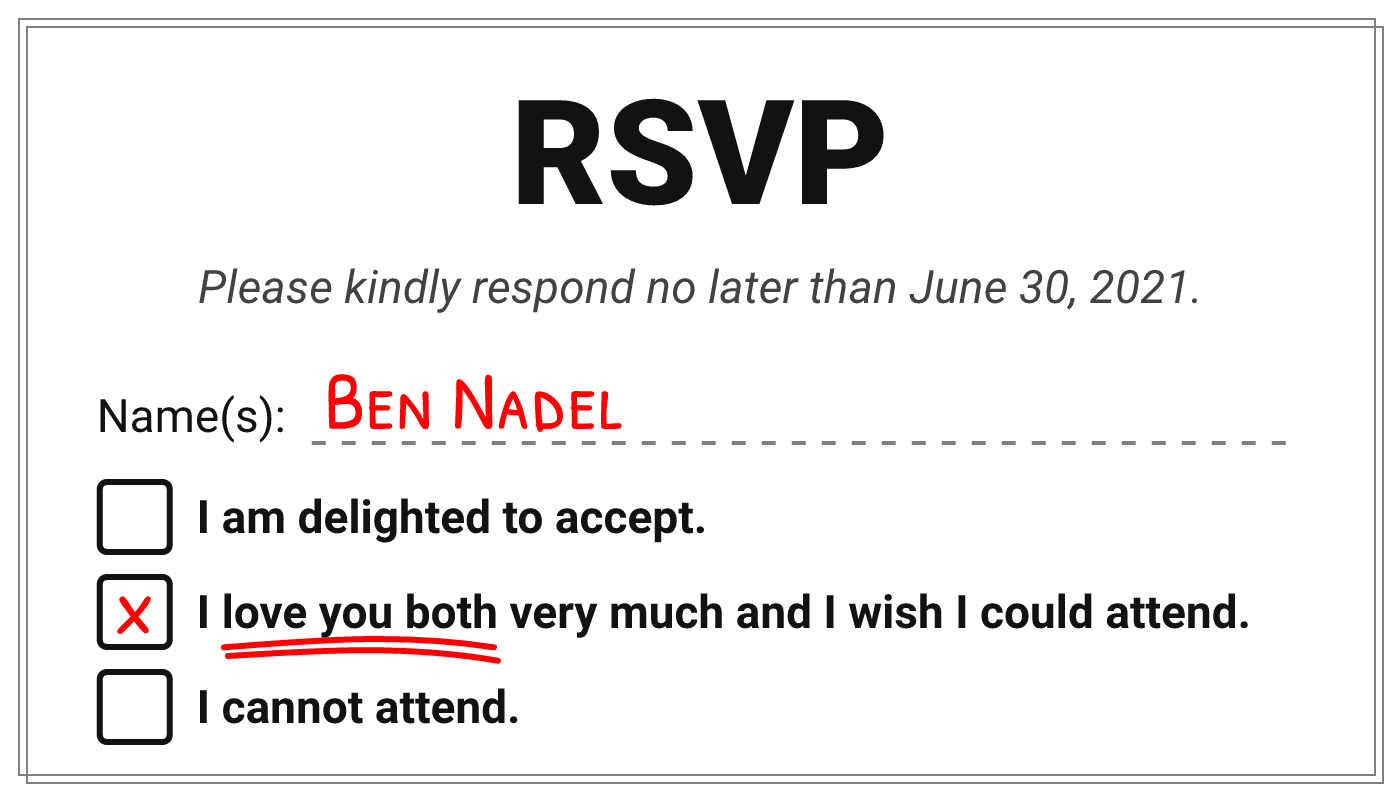 This RSVP card has the traditional Yes / No options. But, it also provides a way for me to say Yes to the union of two people that I absolutely love while also saying No to having a physical presence at the venue. It's a "No"; but, it's a graceful No.

This graceful option also creates better alignment between the sender and the receiver - a mutual understanding that saying "No" is OK; that the sender understands that not everyone can attend (for a variety of reasons); and, that the absence of attendance is, in no way whatsoever, tantamount to an absence of love.

GMail's calendar app provides this user experience (UX). It's called "Maybe". When I receive an invite to a meeting, I can mark myself as "Maybe". Maybe means, I wish I could attend, and I would really love to be there, but I won't be attending.

I wish there was something like this in Pandora - the music streaming app. Currently, when curating a station, I have the option to either Thumbs-Up or Thumbs-Down a song. The problem is, I often have to thumbs-down a song that I actually like. This takes a large emotional toll, rejecting something that I enjoy. What I would love is for there to be an option that is phrased something like:

I really love this song. And, I want you to keep playing it for me. Just, not now - this song isn't right for the station that I'm currently curating.

Basically, a way for me to say Yes to the song but, No to it being played in this context. A graceful No.

It's hard for people to say No. We project our own disappointment onto the reactions that we believe other people will have. A Yes / No dichotomy can lead to a terrible user experience (UX) when saying "No" comes with a lot of emotional baggage. A better user experience in those cases would be to provide a graceful No - a No that communicates that it is OK to say No; a No that sets a better alignment and understanding between two parties.

I understand 100%. I don't drink. I like sport less than I like a trip to the dentist. I've been coding CFML full-time for 20 years but still think of myself as a beginner and that everyone else must know more than me. When I go to the conferences I feel totally out of place. I enjoy the sessions but everything else makes me cringe. At the evening event I usually walk in and grab a soda and cookie, stare at the walls for 5 minutes and back to room. Doesn't help that my hearing isn't the best so holding a conversation in a crowded room is all but impossible. I get those awkward moments when someone says "we're going to {other place}, you wanna come along?" Think we can write an app for my level of crazy?

You're in good company. "Peopling" is exhausting for me. I enjoy the idea of pushing myself for a bit; but, even with people that I feel very comfortable with, I have a 2-hour limit before I start to get physically uncomfortable. This is why my favorite social activity is food at a restaurant. It has structure. It has a predictable time limit. And, when it's done, I get to go home and be quiet :D